Second year pro Alexis Gougeard scooped the first Grand Tour stage victory of his career on Friday, profiting from an impressive and well-timed solo move to take stage 19 of the Vuelta a España in Avila.

The Ag2r La Mondiale rider went clear from the day’s break inside the final hour of racing and caught and then dropped the Katusha rider Tiago Machado. He kept his head down and eventually reached the line 40 seconds ahead of Nelson Oliveira (Lampre-Merida), with Maxime Monfort (Lotto Soudal) leading in Andrey Amador (Movistar), Machado and Amaël Moinard (BMC Racing Team) for third.

This group were a further four seconds back.

“I don’t realize yet [what I did],” he said after the line. “Since the first stage, AG2R La Mondiale made a lot of efforts and today we did it. In the final, I was not nervous.

“I tried and it worked. It’s an important victory. Today, I climb a step.”

Overnight race leader Tom Dumoulin came under attack from Movistar’s Alejandro Valverde during the stage but gained time on all of his rivals with a strategic attack inside the final three kilometres. He powered clear on the cobblestone climb adjacent to the city walls, using his power and experience of racing on the pave, and hit the line 16 minutes 18 seconds behind Gougeard.

Dani Moreno (Katusha) was the only rider from the group of GC favourites able to stay with him.

“We were able to control the stage the whole day, and in the finale I had still Lawson [Craddock] and John [Degenkolb] with me in our group of 20 riders,” said Dumoulin. “The guys were amazing today.

“I was feeling okay. Of course I was tired, but I knew the others were tired too. I just wanted to give it a try in the finale and took three seconds in the GC. I am satisfied, as every second could be critical.”

He said that while people had some questions about the strength of the team, it proved that it was strong during the stage and especially in the finale.

“They led me out perfectly on the final uphill section, and I was able to finish it.

“We have to look at ourselves, believe in our own strength and make a good plan for tomorrow. Tomorrow will be a decisive stage and very tough one too.”

He is now six seconds clear of Aru and one minute 24 seconds up on Rodriguez. Majka, Quintana and Valverde are now between two minutes 31 seconds and three minutes 24 behind.

The 19th stage of the Vuelta a España ran 185.8 kilometres from Medina del Campo to Ávila and featured two classified climbs. These were the category three Alto de Valdavia (km 105) and the category two Alto La Paramera (km 166.7).

There was also an uncategorised cobblestone drag up to the finish line, giving another opportunity to open a gap.

They opened a gap of 13 and a half minutes but this climbed by another two minutes after the rider in second overall, Fabio Aru (Astana), John Degenkolb (Giant-Alpecin) and Salvatore Puccio (Sky) came down in a crash. The peloton slowed afterwards, but accelerated on the Alto de Paramera when the Movistar team tried unsuccessfully to dislodge Dumoulin.

Out front, Machado attacked the breakaway. He was caught by Duque and Gougeard, with the latter attacking 22 kilometres from the finish. Monfort, Amador, Moinard and Machado started chasing and cut his lead to 15 seconds with ten kilometres to go.

He plugged onwards, and with four kilometres to go he had a healthier 26 seconds.

Behind, Alejandro Valverde (Movistar) stretched his legs and tried to go clear, but Tinkoff-Saxo and Astana gradually dragged him back.

Gougeard raced into the city and hit the cobblestones, grinding up the hill and then out onto smoother roads. Behind, the four chasers splintered and Oliviera went by them and pushed clear. He was too far back to catch the leader, though, and Gougeard raced in to take a fine victory.

Oliviera came in for second, 40 seconds down, while Monfort led in the other three to net third.

Back in the GC group, Valverde and another Movistar rider tried to get clear with 11 kilometres to go but they were recaptured. He was undeterred and went yet again.

He was initially marked by an Astana rider but pushed forward alone inside the final 5.5 kilometres. He maintained his advantage towards Avila and up onto the cobblestone climb, but was hauled back there.

The Giant-Alpecin riders pushed the pace for Dumoulin, who got a slight gap and drove onwards. Dani Moreno (Katusha) was able to hold him but Aru was unable to get back up.

He chased hard and was joined by Pozzovivo, who added to the pursuit. However they were unable to return, resulting in a three second time loss by the line and a doubling of his overall deficit to six seconds.

The penultimate stage of the Vuelta a España runs 175.8 kilometres from San Lorenzo de El Escorial to Cercedilla and includes four category one climbs.

It’s Fabio Aru’s final change to regain the red jersey, but he will need to be riding better than he was on Friday to do so. 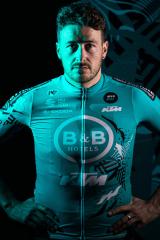