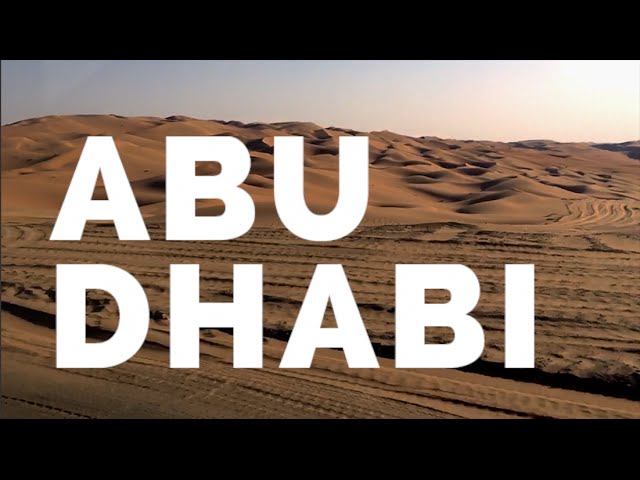 Throughout the 2015 season Drapac Professional Cycling’s Adam Phelan has been putting together great little videos from his time spent travelling and racing around the world. In his latest video and the accompanying article, Adam shares his experience from the inaugural Abu Dhabi Tour, an event that attracted attention as much for its blisteringly hot temperatures as its racing.

“I have always loved the desert. One sits down on a desert sand dune, sees nothing, hears nothing. Yet through the silence something throbs, and gleams…”

The Abu Dhabi desert seemed to swallow the entire peloton. We were just small flickers of colour and noise, dwarfed by the vast nothingness that spread out around us. We rode on through the suffocating air, slaves to the hot sun and glowing sand.

The sun hovered low over the sand dunes, a caramel-coloured mirage shimmering in the sky, as the wind – hot, dense and wet – lifted the sand granules on the surface and made them dance in the air and run across the road like an army of ants.

Silhouettes of three camels stood in the blurry distance: stoic, mysterious and unnervingly comfortable with the blistering heat. It may sound beautiful, perhaps even magical. The further we rode, however, the more the realities of racing in the desert began to bite at our heels.

I was not really conscious of my actions as we raced. My thoughts evaporated in my mind before they could properly form, leaving in their place a heavy haze that clogged my synapses and made my mind hum. I had a headache that slid into and out of existence, a low beating ache that came and went again like a passing breeze.

We rode in slow motion — the peloton could not ride any faster. It was above 45 degrees celsius. A rider next to me, his cycling kit stained with white sodium-crusted sweat, told me his heart rate was above 180 beats per minute.

“It’s like we’re riding at altitude,” he said, throwing a full bidon of water over his head and along his arms and legs. He groaned, out of relief or suffering I could not tell, and then bowed his head as the road turned upwards.

"It's like riding in a sauna" – @blingmatthews summing up yesterday's race perfectly pic.twitter.com/FnIbVhykUB

I had a sock filled with ice placed at the back of my jersey. It was already half melted before I managed to put it at the rear of my neck. I began to dream about the cold: I imagined jumping into the snow face first and swimming in a sea of ice. The road ahead seemed to glow and melt.

I drifted toward the rear of the peloton and signalled for the team car. It was like an international trading port: riders were coming and going, offloading empty bidons and carrying new ones, their jerseys stuffed full. They had ice socks and cold soft drinks. Some simply had plastic bottles full of water, used only to throw over their heads and backs.

The bottles in our team car were housed in a mountain of ice. I grabbed a bottle from the hands of my team director, the touch of cold caused goosebumps to travel along my arm — the harsh contrast to the heat pinched at my senses. I instinctively threw its entire contents over my head.

There was a delayed moment, no longer than one second, before the sudden snap of cold hit as the water cascaded down my face and back. My body froze and stiffened in place. The experience was equally horrible and euphoric all at once; a conflict of perception and sensation raged within me.

I grabbed enough bottles for all of my teammates. I had them in my pockets, up the back of my jersey and I slid a few down the front of my top. I got salt tablets to try and help replace the sodium lost in my sweat. The drinks were a combination of water and electrolyte mix.

I put another ice sock down my jersey and moved back up towards peloton, my body now shaped like a camel and weighed down by several litres of cold water resting against my skin. This was the economy of keeping cool and hydrated within the peloton; it was an operation that required constant effort and vigilance.

In professional cycling, the open road is our stadium. It is our tough reality. No matter what the road ahead may produce for us, we must adapt like a chameleon changing the colour of its skin. The peloton is agile and metamorphic. We ride through the heat, the cold, the wet and the dangerous.

Only three weeks prior, in Alberta (Canada), the peloton was met with snow and sleet. They rode through thick mud and rain. That environment required a completely different type of economy, one that consisted of the exchange of extra clothes, newspapers, hot tea, and cycling caps.

Often in equal measure, however, we ride through some of the most beautiful, epic and picturesque areas of the world. We ride through cities with never-ending sunshine, and race past golden beaches and coastlines. It is this juxtaposition of sheer harshness and undeniable beauty that makes cycling the fantastic and unique sport that it is.

Abu Dhabi, weather made for… ??

I was not thinking about these things as I rode through the desert in Abu Dhabi. My mind, still crawling through the thick haze, kept to the basics: keeping hydrated, eating, and watching the kilometres as they ticked by, if only slowly, towards the finish. That line would come. The cold shower, that icy drink and the cool air-conditioned hotel room would soon be there for me. It was my pot of gold at the end of the rainbow.

It was an uncompromising climate, yet there was real beauty there, even if I did not truly appreciate it as I raced. At the hotel, once I was off my bike and free from the debilitating heat, I saw this world with fresh eyes.

The view from the Qasr Sarab Desert Resort, a castle-like fortress in the middle of the desert, is an image that has been burnt into my memory for life. Off the bike, the desert was no longer a prison for my body: my throat was not impossibly dry, my skin was relieved from the thick wall of sweat and my mind was released from the drumming ache within.

Like someone had replaced a broken lens on a camera, the desert then revealed itself to me.

The sand dunes were a connected ecosystem flowing in and out of one another, rising and falling, like ebbing waves of a golden ocean frozen in time, set solid in the middle of their dance. It was unlike anything I have seen before. My room, set to the right side of the hotel, faced out towards the vast desert – a seemingly infinite emptiness before me – and it was easy to forget I was there all because of a bike race.

Though there I was. Racing my bike in a barren world unlike any other. It was another experience gained and earned.

The Abu Dhabi Tour had its challenges for us riders. The heat pushed our limits and tested our ability to handle extreme conditions. Yet, there was indeed something that ‘gleamed’ out there, a certain something that left me in a state of awe and yearning to go back and do it all again. Just make sure to give me plenty of water.