Continuing a superb run of form in the past three weeks, Vincenzo Nibali soloed to victory in the Il Lombardia on Sunday. The Italian champion clocked up his first Classic, attacked on the descent before the final climb, fending off a chase by Dani Moreno (Katusha) and racing in 21 seconds clear.

The success sees Nibali join a very exclusive club of winners of the Giro d’Italia, Tour de France, Vuelta a España and Il Lombardia. Only Felice Gimondi, Eddy Merckx and Bernard Hinault have done that; now Nibali is part of this group.

“It is never simple to win a race of this kind. It was my time to win it,” he said.

Nibali’s Astana team was very strong and chased down breakaway riders Tim Wellens (Lotto Soudal) and Michal Kwiatkowski (Etixx – Quick-Step), the 2014 world champion, on the climb of the Civiglio.

Kwiatkowski was last to resist and was hauled back with 19.5 kilometres left. A succession of attacks were fired off from the group of main favourites, including surges by Nibali. He was unable to break the elastic on the way up and so he changed tactics and slipped clear on the descent inside the final 15 kilometres.

Showing dazzling skill, he used every bit of road to carry as much speed as possible into the tight hairpin bends, and sat down on his top tube on the straights. This combination of courage, handling ability and aerodynamics paid off, with the Italian carrying a solid lead onto the final climb of the San Fermo Della Battaglia.

Moreno was strongest of the rest on that climb but left his attack too late, getting closer to Nibali by the summit but not making the junction. Once back on the downhills he slipped backwards and the Italian leader was able to finish 21 seconds ahead.

His success helps to make up for his expulsion from the Vuelta a España. He had held onto a team car when trying to return after a crash, but protested that the penalty was too severe.

He returned to net second in the Coppa Agostini on September 16, then finished first in the Coppa Bernocchi, third in the memorial Marco Pantani and fifth in the GP Industria & Commercio di Prato.

He hoped to use that form to take the world title in Richmond. Things didn’t work out there, but he bounced back last Wednesday in taking the Tre Velli Varesine.

Il Lombardia is another level again, and he has ended the European season in style.

“What a fantastic day,” he said. “My team was perfect all day and I really wanted to reward them with the win. I tried to get away twice on the climbs, but I was too closely marked and I realised that I would have to try something different, so I had another go on the descent from the Civiglio.

“My team-mates were exceptional, starting with Vanotti and Agnoli early on, all the way to Landa, who was brilliant, and Rosa, who was still strong in the closing kilometres. It was not easy, but we did not relent all race, and I am truly happy now.” Vincenzo Nibali’s Astana team were chasing behind and started turning things around 140 kilometres in. The gap was down to five and a half minutes with 90 kilometres left, with Movistar helping Astana.

Benedetti and Canola pushed ahead of the leaders, while Trentin lost his place with the chasers. Both groups blew apart on the climb and a reshuffle took place. After the summit Canola, Benedeti, Van Winden and Barbin were out front, with a chase group containing Kwiatkowski, Gesink, Jelte Slagter, Geschke, Polanc, Wellens, Izagirre and Wisniowski in pursuit.

Once on the Muro di Sormano Canola and Benedetti led, but Kwiatkowski and Wellens got past on the steep roads and tried to fend off the hard-chasing peloton. The latter had been hacked right down to less than 20 riders by the Astana team.

The gap was small on the Civiglio climb. With 20 kilometres to go Kwiatkowski pressed on alone but was caught 500 metres later.

A stream of attacks followed in the group of favourites. Diego Rosa and Nibali were prominent for Astana, both attacking in turn, while Pinot and Chaves were also in good shape. Moreno, Valverde and Nieve similarly seemed strong.

Nibali tried again inside the final 16 kilometres. Pinot was able to go with him but was suffering. Moreno brought Rosa, Chaves and Valverde up, prompting Nibali to switch tactics and make his next move on the descent.

He used his descending prowess to get a slight gap and, as the kilometres ticked by, he continued to extend it, being visibly faster on the straights and also through the turns.

Rosa moved to the front of the chase group and did what he could to further slow things down. Nibali was taking many chances, almost hitting the neutral service motorbike when the pilot got things wrong.

He kept his momentum going on the flatter roads afterwards, while those behind appeared to lack real urgency – and cohesion – in their pursuit.

Nibali hit the final climb with 7.5 kilometres to go. His lead was 44 seconds at that point and, realising the danger, Pinot attacked. However he was no match for Moreno, who bridged across and then dropped him.

The Spaniard got closer to Nibali but time was running out. The Italian hit the descent and things swung back in his favour, with his skill level clearly higher than that of his pursuer.

He continued onwards and hit the line well clear, beating Moreno by 21 seconds. A small Italian flag fluttered out of the crowd and momentarily stuck to his chest, reinforcing the significance of the result for the home fans.

Pinot came in for third, 32 seconds back, then Valverde beat Rosa and Nieve for fourth. They had raced hard, but been completely outclassed by a rival who exploited both uphill gradient and downhill curve to win. 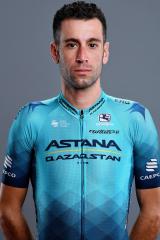