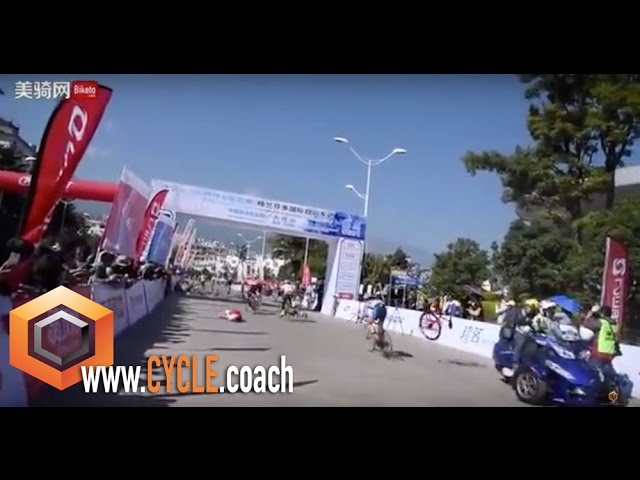 Finish-line crashes are common at all levels of bike racing but we’ve never seen anything like this incident on stage 4 of the Colourful Yunnan Gran Fondo in China on November 12, 2015.

Daniel Carruthers, a New Zealand national who has been living in China for many years, attended the event and witnessed the crash and wanted to clarify some information spreading on social media which he felt was inaccurate.

Carruthers told us, “First, lets correct some facts. There were allegations that the lead car went the wrong way and that the organiser, Nordic Ways, deny fault. Both are un-true and come from people interviewed that were not even at the race. It seems that most of the Western media, including road.cc just copied the story released by China Press Agency Xinhua without verifying any of the facts including misquoting the name of the event. The statement that 17 cyclists were hospitalised as a result of that crash is also incorrect. There were many crashes, as is normal in bike racing, during the high speed stage and those riders went to the hospital. It is quite common for riders in China to be taken to the hospital as a precaution.

He added, “It was unfortunate that the local Chinese media based their reports on testimonies provided by people who had not even witnessed the crash accident and never bothered to verify claims with the race director or relevant people in the organisation. This has led to Western media picking this up and re-publishing; thus creating the social media storm we are witnessing now.

Carruthers continued, “There was no doubt that the local organisation made a mistake with the final corner that led the lead group riders to take the wrong side of the road. It was also announced immediately after the crash that damages of any kind would be compensated. This shows that Nordic Ways was taking responsibility for the incident, so the claim that the organisers refused to take the blame is ludicrous. It should also be remembered that a number of riders from the lead group said afterwards “as a rider you also need to keep using your head”.

“Think about it for a second, a peloton sprinting in full flight in the wrong direction to the finish-line and colliding with a second group of racers sprinting in the correct direction, makes for potentially a nasty fatal crash. Fortunately, all riders made it through relatively unscathed despite nearly 20 riders hitting the deck crashing into riders head on. The final corner in question should have been marked and marshalled by local police officials. It transpired that the two assigned workers for the left-hand corner that led to the finishing straight, approximately 800m before the finish-line, bungled the corner. They did not follow instructions given to them and they closed off the corner on the outside with tape instead of the inside. The workers had also placed bright orange cones but spaced too far apart, thus in the heat of the action the lead group followed the first rider and thats how the large group went down the wrong side of the road. Further confusing riders was the red banner on the right side of the road next to the correct banner.”

Nordic Ways would like to issue a follow-up statement on the ‘Dali crash’ in response to recent media reports.

Following our initial statement published on the event website two hours after the finish of the 4th stage of the Colourful Yunnan Granfondo Cycling Festival in Dali, we re-iterate our sincerest apologies for the unfortunate accident as technical organisers of the event. We wish to react, however, to a number of claims and insinuations published in some domestic media reports that are in conflict with the truth, and that since have been copied and distributed further by international media.

The leading car of the Race Director did not drive into the wrong lane at the controversial final corner.
Nordic Ways assumed responsibility for the accident within an hour after it happened and at the same time announced that all damages suffered by affected riders will be compensated.

While this is no attempt to downplay what happened, the collision at the finish did not result in 17 hospitalisations. Other crashes occurred earlier in the stage – as they always happen in high-speed bike races on flat terrain – and riders involved were requested to enter the ambulance out of precaution, which is a standard measure in China.

We find it deplorable that the reporters of the concerned media outlets did not contact anybody in our Race Direction Team for verification of the statements made by their interviewees.

Finally, we kindly invite readers to revisit our race report, published on the event website [link] that evening, for further information on what caused the confusion among riders and the collision that followed.

– Inadequate course marking and marshaling caused confusion among most of the front riders of the leading group, and they rode into the wrong lane of a wide road split by plant boxes in the middle
A number of riders realised they were on the wrong side and entered the correct lane on the left a few dozen metres further down.

– The leading riders of the long distance race thus sprinted into the short distance finish.

– The exit at the back of the finish arena was used as an entrance by a number of those riders, who, in confusion, decided to relaunch their sprint in the opposite direction of the oncoming second group.