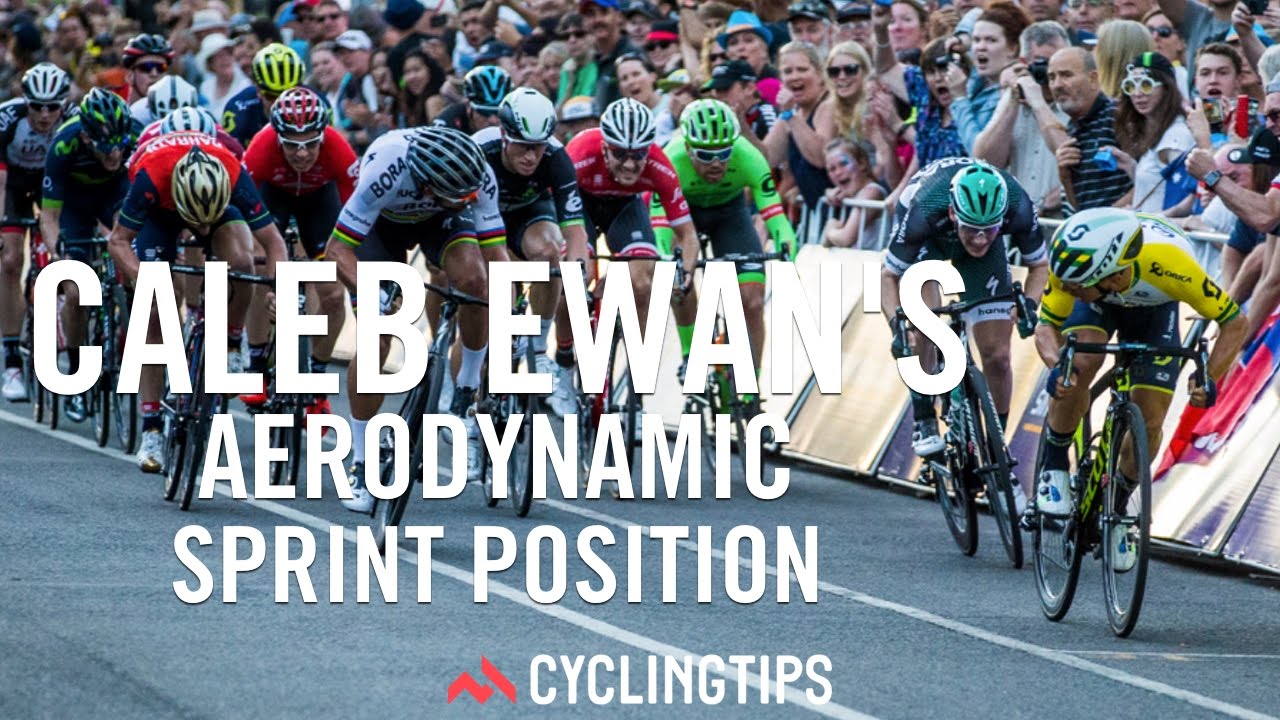 It’s still too early to tell whether Caleb Ewan will join the likes of Robbie McEwen and Mark Cavendish on the list of greatest-ever sprinters. But the 21-year-old certainly appears headed in the right direction, courtesy of a stellar neo-pro season and an equally impressive start to 2016.

Ewan won two stages at the recent Tour Down Under but it was arguably the Orica-GreenEdge rider’s sprinting position on the final stage that attracted the most attention. As you can see in the video above, Ewan gets his head below the line of his handlebars — an impressive and somewhat extreme position. But watching the footage from that sprint, even Ewan himself is surprised to see how low he gets.

“I knew I got down pretty low,” Ewan told CyclingTips at Sunday’s Cadel Evans Great Ocean Road Race. “But to actually see it like that; I didn’t expect it to look that extreme.”

The idea behind Ewan’s position is exactly what you’d expect: aerodynamics. But while trying to get aero makes sense, executing it while you’re sprinting at your maximum isn’t quite so easy.

“Nowadays there are so many fast guys that you need every little advantage you can get and getting aero like that gets you a pretty big benefit,” Ewan said. “The hard part is getting your head around it during the sprint.

“All you’re thinking about is getting as much power out as possible. Actually thinking about [your position] during the sprint — the split second that you actually have to get lower as the sprint goes on — that’s the hard part.”

While Ewan has attracted plenty of attention for his aero sprinting position in 2016, he’s actually been working on it for more than 12 months (see the video below from the 2015 Jayco Herald Sun Tour).

“It’s something I’ve been practising for a little while,” Ewan said. “I went in the wind tunnel a bit over a year ago and we tried some different positions and we found that the [low] position is much more beneficial than riding more upright. You don’t really need to go to the wind tunnel to figure that out.”

It makes sense — a more aerodynamic position while sprinting should provide an advantage. But how much of an advantage? According to Paolo Menaspa, a researcher at Perth’s Edith Cowan University: “In practical terms, a 10% reduction in frontal area (CdA) can result in more than three metres advantage over a 14-second sprint.”

In a tight sprint, three metres could be the difference between 10th place and victory.

With Ewan getting his weight so far forward and over the handlebars, how does he keep control of the bike and prevent the back wheel from lifting?

“I usually accelerate more upright and then as my sprint goes on I gradually get lower,” Ewan explained. “It [the wheel] stays there. Hopefully it stays there otherwise it would end pretty badly.”

Footage of Ewan’s new sprint position has prompted some to suggest that it mightn’t be safe when he’s sprinting alongside others (rather than winning by several bike lengths like he’s done so far this year). But as Ewan explains, that’s a risk he’s aware of.

“[I use the position] more so when I try to maintain my sprint when I’m already out in front,” Ewan said. “If you get a knock while in that position it’ll end pretty badly. When I’m around other riders and close to them I’ll still be low, but not that low.”

One of the other riders Ewan might find himself sprinting against in 2016 is Mark Cavendish, another sprinter known for his aerodynamic position.

The story goes that back in 2007, when T-Mobile was testing all of its riders, Cavendish measured so poorly in VO2max and power testing that he was told he’d never have the physiology to be a professional cyclist. Fast forward nine years and Cavendish has won 26 stages at the Tour de France (third on the all-time list) and countless other bike races, all as a result of his fast finish.

Cavendish shows that output alone doesn’t win sprints. Cavendish reportedly generates a lower peak power than many of his rivals, with the likes of Andre Greipel and Marcel Kittel generating around 2,000 watts at their peak. And yet Cavendish is still able to beat them to the line due to a combination of good positioning, quick thinking, and one of the most aerodynamic sprint positions we’ve seen. Until now.

In the past year or so, many onlookers have compared Caleb Ewan and Mark Cavendish, not just because of Ewan’s propensity for winning bike races but, more recently, because of his super-aero position. Again, it’s too early to tell just how good Ewan will be, but he certainly appears to be on the right track.