Chloe Hosking’s stage three diary of Qatar: ‘Today was my worst day in the desert ever’

The Tour of Qatar is sometimes considered a boring race, with fast stages, a compact peloton, together for the entire race, ending in a bunch sprint (and in the Ladies’ edition, it’s usually Kirsten Wild who wins). Yesterday’s stage proved the race can actually be really exciting and it’s the riders that make a race interesting or not. And interesting it was, with the brave Swedish rider of Lares-Waowdeals opening the ball and the echelons forming later in the race. The GC was turned around completely after the stage, with Katrin Garfoot (Orica-AIS) arriving at the finish line solo, taking over the leader’s jersey, and riders crossing the line in groups behind her.

The Wiggle High5 team did not have a great day yesterday, although Amy Pieters did make the lead group of four that formed three kilometers from the finish line. Pieters, Trixi Worrack (Canyon-SRAM) and Romy Kasper (Boels-Dolmans) somehow couldn’t prevent Garfoot from escaping this group and Pieters crossed the finish line third, with 19 seconds to her name. Chloe limited her loss to around a minute in the GC, but something certainly needed to be done today, if the team was to set things right for this year’s Ladies Tour of Qatar. However, it turned out to be yet another thrilling and unexpected day in the Qatari desert…

‘That was a hard day in the desert. Today’s 105km third stage from Al Zubarah Fort to Madinat Al Shamal has a history of decimating the peloton — last year only six women finished at the front of the race on the carbon copy of today’s stage.

We knew this year would be no different; there were reports of winds reaching up to 65km/hr. However, unlike yesterday, we didn’t have to wait for the crosswinds. They were there from kilometer one.

And thus started my day of chasing. I would go as far as saying that today was my worst day in the desert ever.

As we had expected, as soon the red flag dropped to signal race on, the peloton didn’t need any extra encouragement; they dropped the hammer like MJ dropped a beat. While we had wanted to be the team in control, the reality is we weren’t organised enough and we were forced onto the back foot straight away.

As the front group was forming I was fighting, fighting, fighting, but I just couldn’t muscle my way into the echelon, and as they like to say in cycling, my elastic band snapped. I watched as 12 riders rode away in front of me. The group was made up of three Canyon, three Boels, two Rabobank, Wild, Olds, Elvin and the young Aussie Loretta Hanson.

As if that wasn’t bad enough, I’d gone so far into the red trying to hang on, that as the group behind me caught me I couldn’t even hang on there. In a matter of minutes I had gone from the front of the race to the third group on the road.

Now you get an idea about the havoc crosswinds play on a peloton. Imagine a kindergarten classroom 5 minutes before school starts. Then imagine it 5 minutes later when the toddlers have overtaken. That’s what crosswinds do to pelotons.

We had no choice but to go into damage control. Our director was in our ear straight away telling Amy and Emma that I was just behind and to wait because then we would have ‘extra power’ to chase.

‘Girls, we wait for Elisa and then we work together with Orica and Liv and we close the gap. It’s our only chance,’ Egon buzzed through the radio.

He had obviously been busy talking with other directors to organise the new crisis management plan. In the current situation it was in Orica’s (who only had one rider up front and their golden jersey wearer Katrin Garfoot behind with us) and Liv-Plantur’s (who had no one in the lead group) best interest to work with us to close the gap. ‘They are your teammates now,’ he said.

So that’s what we did. For fifty kilometres. My butt has never burned more. The waiting cost us about 40 seconds so the gap blew out to almost three minutes. By the end, we had closed it to around 40 seconds. I can’t tell you the exact time gaps because, as yesterday, I’m writing this in the car as we zoom back to the hotel and I nurse my burning buttocks.

While we chased, probably working just as hard if not harder than the 12 up the road, they started to play games. Going into the final finishing lap (we did four) of just over 10km, Gracie Elvin thought she would have a go and launched an attack. It didn’t stick. They chased her back and Ellen van Dijk countered. It stuck. She won the stage just as she did last year, solo with the group strung out in single file behind her.

The golden jersey changed shoulders for the third time with Trixi Worrack taking over the race lead. Where everyone else sits on the general classification I couldn’t tell you. And to be honest, for now I would rather go into denial and never think about today’s stage again. That’s the best way to deal with things right?’

Today, it was Kirsten Wild (Team Hitec) who was on her toes and made the first echelon, while golden jersey wearer Katrin Garfoot (Orica-AIS) missed the first group. Garfoot was soon minutes behinds, meaning the stage today would once again turn the GC on its head. The riders’ reactions on social media after the race confirm that it was indeed as brutal as it looked like.

After 60km of racing, the twelve leaders entered the local circuit of 13 kilometers, which they were to complete four times. The first intermediate sprint, at the second passage of the finish line, was won by Gracie Elvin (Orica-AIS), who had saved herself at the back of the group up until then. Anouska Koster (Rabo-Liv), who’s defending the white youngster’s jersey, took some bonification seconds with a second place.

Towards the end of the race, it looked like the gap between the leaders and the chase group, with Chloe and Garfoot in it, was actually going to get bridged, with only 35 seconds between them with 20km to go. But it quickly opened up again to around a minute, the sign for the lead group to start attacking. Gracie Elvin launched another solo attack for Orica-AIS, sneaking out from the lead group at 11km to go. They were able to reel Elvin back in, though losing Lisa Brennauer (Canyon-SRAM) in the process. A monster attack by Van Dijk in the last 2 kilometers proved to be successful and she crossed the finish line first, not even able to lift her arms into the air after a long day in the breakaway.

The sprint for second place was won by Wild, with Hanson and Koster going for the bonification seconds behind her. It was Hanson who got the upper hand and she took some precious boni’s, with Koster finishing fourth in the stage.

The golden leader’s jersey changes shoulders once again, German road champion Trixi Worrack (Canyon-SRAM) being the new leader in the GC. Romy Kasper (Boels-Dolmans) moves up to second place, 17 seconds behind Worrack. Van Dijk is now third in the GC at 31 seconds. Although yesterday’s and today’s stage have proven anything is possible, it looks like we know who’s going to be on that top step at tomorrow’s GC podium. Worrack is by far the fastest sprinter of the three and it’s not likely that the strong Canyon-SRAM team will let any of the two Boels-Dolmans riders get away.

Wild, having lost hope of winning her fifth Ladies Tour of Qatar this year, does have a firm grip on the silver jersey for the points classification after today, with 31 points compared to Van Dijk’s 22 points and Worrack’s 18.

Canyon-SRAM leads in the team classification with Wiggle High5 dropping to fourth place. Orica-AIS and Boels-Dolmans are second and third. 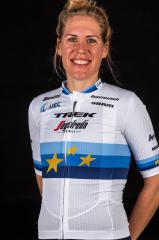 Follow Chloe Hosking, new team mates Valentina Scandolara and Alison Tetrick taking over our Instagram, and their teams on their official accounts: