MELBOURNE, Australia (CT) – Will Clarke (Drapac) has won the prologue individual time trial at the Jayco Herald Sun Tour for the second year in a row, again relegating Caleb Ewan (Orica-GreenEdge) to second spot on the podium.

Clarke completed the 2.1km city-centre criterium in a time of 2:34.27 (49.1km/h average), beating Ewan by a single second — the same margin as in last year’s race. Neil van der Ploeg (Avanti IsoWhey) was third, a further second behind Ewan.

Light rain fell in the early part of the evening, putting some riders at a slight disadvantage, but it soon fined up in time for Clarke to complete his effort.

“I was lucky it dried up for my run,” Clarke said. “Unluckily one of my teammates, Tom [Scully], who was aiming for a good result, had a wet start so I was lucky it was dry in the second half.”

The lead changed hands several times as the early riders set their times on a technical course starting in Melbourne’s Federation Square and ending in the Southbank restaurant precinct. Ryan Cavanagh (State of Matter MAAP), Pat Shaw (Avanti IsoWhey) and Jack Bobridge (Trek-Segafredo) all enjoyed brief stints in the hot seat before Robbie Hucker (Avanti IsoWhey) set a time of 2 minutes 37 seconds, moving to the top of the leaderboard.

Clarke would spend the remainder of the evening in the hot seat with only Caleb Ewan going close to unseating the Drapac rider.

“[It was] a nervous wait for me actually, starting 40-45 minutes before [Ewan],” Clarke said. “I thought he’s good in the corners and he’s very fast so the course sort of suits him as well.”

In his first race of the season, reigning Tour de France champion Chris Froome (Sky) finished in 26th place, eight seconds off the time of Will Clarke.

“I’m happy with that,” Froome said. “The main objective today was just to stay upright. I think the racing’s still going to be decided over these next few days, undoubtedly once we get to Arthurs Seat at the end. That’s going to be the big day.”

The 2016 Jayco Herald Sun Tour continues tomorrow with the first of four road stages — a 126.1km effort that starts and finishes in Healesville and includes two challenging climbs along the way. Will Clarke will wear the leader’s yellow jersey while Caleb Ewan will wear the white jersey as leader of the best young rider classification.

Clarke hopes to defend his leader’s jersey through tomorrow’s stage but isn’t expecting it to be easy.

“It’d be nice to hang on to the jersey for a day or two but we have to see how the race plays out,” Clarke said. “With such a short prologue the time gaps aren’t huge so it’s not like I’m 10 or 20 seconds up on anyone. Whoever basically wins tomorrow’s got a good chance of pulling on the leader’s jersey.

“We’ll just try and wait and see how the race is going, maybe try and put some guys up the road to defend our interests that way.” 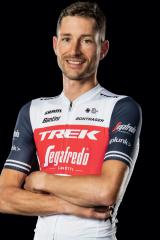 The Froome Factor: What impact did the Tour de France champion have on the Sun Tour?