Only thee days after the European cycling season began with a double weekend in Belgium, yet another Belgian UCI race was on the program today: Le Samyn des Dames.

Not unlike last year, Chantal Blaak (Boels-Dolmans) went head-to-head with Wiggle High5’s Emma Johansson, and succeeded in defending her 2015 win.

“I didn’t feel pressure today to win again,” commented Blaak. “Every race is new. It doesn’t matter if it’s the same course or a new course. The weather can change a lot, and also the riders and the situations make the race. It’s always different even if you’ve won before. I was focused on doing a good race again and not thinking about last year so much.”

The weather conditions were quite similar to last weekend’s: blue skies and quite sunny, but lots of wind and almost freezing temperatures. Some of the bigger UCI teams were absent from this race, like Rabo-Liv and Cervélo Bigla, allowing the peloton to be altogether for all of the first hour of racing.

The chilly winds and high pace started doing some damage after 50 kilometers, when a  group of around 25 riders split from the bunch, including all five Boels-Dolmans riders, Cylance Pro Cycling’s Shelley Olds and Valentina Scandolara and both Amy Pieters and Emma Johansson of Wiggle High5.

With eight kilometers to go, eight riders broke free of the lead group, all of Boels-Dolmans but Karol-Ann Canuel among them. This numerical advantage gave them the supremacy to have Blaak in the final attack together with Johansson, quickly getting the gap up to 30 seconds. Johansson didn’t stand a chance against the sprinter legs of Blaak and had to settle for second, while Pieters won the chase group sprint for third. Wiggle High5 made up a little bit for missing out on both podiums last weekend, but had to leave the victory to Boels-Dolmans and Blaak.

“It’s the team. The whole team works well together, and the whole situation in the team makes me better,” said Blaak. “The girls did awesome today,” Blaak added. “I’m very, very happy.” 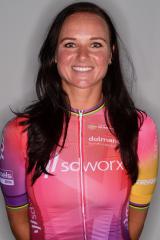