For the second time at the 2016 Amgen Tour of California the breakaway survived and it was a rider in the green of Team Cannondale that came out on top.

Toms Skujins (Cannondale) proved he had coped best with the altitude as he outsprinted his breakaway companions Adam De Vos (Rally Cycling) and Xabier Zandio (Team Sky) to win stage 5 of the eight-stage race. The three riders were once part of an 18-rider breakaway that dominated the day.

“It wasn’t easy to get into the breakaway,” Skujins said. “We all knew that today the breakaway might stick. Luckily I got into the right move. As always is the case with big groups, not everyone is committed, and that’s understandable, different teams have different objectives.

“In the end it worked out pretty well. Once I hit the second climb, those two guys bridged up to me, and we were in the clear.

“In the finale, I wasn’t sure how far we were to the finish line. I didn’t want to start my sprint too early, especially at altitude, but once we came around the corner, I was pretty sure I could get this.”

The group of general classification favorites finished 43 seconds behind Skujins and surprisingly most came in with the same time, except for the wearer of the Best Young Rider jersey, Neilson Powless (Axeon Hagens Berman), who suffered in the final couple hundred meters and lost 18 seconds to the favorites, dropping to sixth overall. He is now one minute and one second behind race leader Julian Alaphilippe (Etixx-QuickStep).

Alaphilippe was grateful for his teammates after a long day in saddle.

“Today was a really hard stage,” the Frenchman said. “It was always uphill. Everyone was suffering. We didn’t have much time to enjoy the beautiful view. I’m really happy, my team did a good job, we had two guys in the breakaway, it was perfect for us.”

The riders calmly rolled out of Lodi in the California sunshine, the day looming large with over 4,000m of climbing and 212 kilometres before finishing in South Lake Tahoe.

The breakaway established itself 30 kilometres into the stage and it was massive. Some 18 riders formed the move, with every team except Novo Nordisk putting a rider in the lead group.

The breakaway worked well together and quickly built their advantage to six minutes before LottoNL-Jumbo and Trek-Segafredo came to the front to keep things in check and defend their leaders’ positions on the general classification.

Lachlan Morton (Jelly Belly), who came to the race as one of the favorites and had a solid ride on Gibraltar Road on Tuesday, abandoned the race early into the stage. He had crashed heavily the day before, losing 10 minutes on the day and any chance at a good result on the general classification.

Bouet captured the first intermediate sprint to take a three-second time bonus while the riders had begun the long uphill grind toward Lake Tahoe.

At the top of Kirkwood Summit 60 kilometres from the finish, De Vos and Skujins opened up a gap on the rest of the breakaway, while BMC Racing had come to the front of the peloton. The gap to the leaders had been reduced to three minutes.

The breakaway regrouped on the descent minus a couple of riders who had begun to suffer due to the altitude. The peloton let off the gas and the break’s lead went out to around four minutes, but the attitude in the bunch was about to change.

As the peloton navigated a plateau through one of the many lakes on the road to Lake Tahoe a stiff crosswind began buffering them from the left. BMC Racing took this as an opportunity to put everyone in the gutter and drove hard at the front. A mixture of the long sustained uphill and the crosswind had decimated the peloton and only about 35 riders remained.

With 35 kilometers to go Taylor Phinney (BMC Racing) took over the front of the peloton and barely move from that position for the next 20 kilometres.

Cohesion among the breakaway had all but disappeared and Skujins struck off alone. Zandio and De Vos soon joined him, and the three set about making sure they would contest the stage win.

Inside the final 5 kilometres, the trio continued to work well together and held a 50-second advantage over the chase group with the peloton out of the picture.

Christian escaped out of the chase on an uphill section as the riders made their way to the final climb. The Team Wiggins rider was soon joined by Kuurne-Brussels-Kuurne winner Stuyven and Guarnieri.

Skujins led De Vos and Zandio onto the punishing finishing climb, but the trio continued to rotate the pacemaking. Meanwhile, Stuyven had set off alone in an attempt to reach the leaders.

The trio had now begun to look around at each other as Stuyven slowly closed in. De Vos led around the final bend and opened the sprint, but Skujins was quick to catch his wheel. Zandio stood, attempting to follow, but sat back down. His legs had had enough.

“Yeah nice ride, no?,” the 39-year-old said of his effort. “Yeah actually good today, I try. I [make] the breakaway early and then I attack with two guys more, but it’s not possible in the sprint.”

“I am too old,” he added with a chuckle.

Skujins sprinted around De Vos with apparent ease to take the win. The victory comes a year after his breakthrough ride in the Amgen Tour last year, which included a stage win and a stint in the leader’s yellow jersey.

Ironically, both wins have come from stages that have started in Lodi. “Hopefully we will have another stage next year from Lodi,” Skujins joked.

The GC favorites arrived together with pain pictured all over their faces from the stinging efforts at the high altitude.

Laurens Tens Dam was happy to finish with the favorites on the stage after crashing and hitting his knee hard earlier in the day.

“It doesn’t feel good,” Ten Dam said of his knee after the stage. “I know the TT and it’s obviously made for guys like Dennis, Talansky, Craddock, those TT guys. I will try, but to be honest I would like to have one more mountain stage.”

Rohan Dennis (BMC Racing) is the heavy favorite to win the day, but he will have to make up about a minute on Alaphilippe and beat out the others in front of him to take the yellow jersey.

“Look … Alaphilippe, he’s not a time-trial specialist,” Dennis said of the French climber. “That’s pretty well known. But I’ve looked at his time trial resume and it’s hard to tell. Sometimes he loses a lot of time and sometimes he doesn’t. I don’t know where he’s at.

“I know he’s climbing well at the moment, and he’s quite a punchy rider, but does that mean he’s lost time trial ability, or is he just in good form in general? We’ll soon find out.” 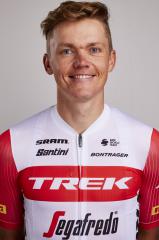