Rain came pouring down at the start of stage 3 of the Tour of Chongming Island today.

Chloe Hosking (Wiggle-High5) took to the start in the yellow leader’s jersey, defending it in the 99 kilometer stage, which consisted of nine laps on an 11 kilometer circuit.

Because of the bonus seconds Hosking took throughout the stage, she only needed to keep an eye on Leah Kirchmann (Team Liv-Plantur) in the final sprint to secure the overall victory.

“I picked up two seconds in the first intermediate sprint which took me to five seconds ahead of Leah and 11 seconds ahead of everyone else. After the second intermediate sprint I got the information from Nico, that barring disaster, the only person who could beat me was Leah as everyone else was 11 seconds behind me and you only pick up ten for the stage win”, Hosking explained in the Wiggle-High5 report on the stage.

As Ting Ying Huang (Chinese Tapei team) sprinted to her second victory in this race, in a chaotic and crash filled final, and Kirchmann didn’t take any of the finish line bonus seconds, Hosking won her second Tour of Chongming Island, seven year after she was victorious in Chongming for the first time. 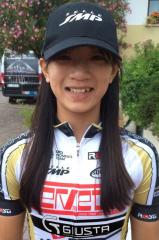 “It was also special to win the tour in front of my Mum on Mother’s Day. I was so glad to be able to share the moment with her”, Hosking added.

Disappointment at Team Liv-Plantur, as they leave China without any stage wins. “I’m disappointed with how things played out on the final stage, as the final result does not reflect how well we rode together as a team this whole week. I lost our lead-out train in the final, and then narrowly avoided crashing during the chaotic sprint in the rain,” Kirchmann was quoted on the team website.

Kirchmann does hope the team will benefit from the practice runs they had in China in future races: “We had a lot of opportunities to work on our lead out this week, which will serve us well in the upcoming races.”

To relive the first stage race in the 2016 Women’s WorldTour, watch the highlights video by the UCI:

You can also rewatch the last seventy minutes of the third stage:

Here’s our Velofocus gallery of stage 3 and Hosking’s victory in the 2016 Tour of Chongming Island. Cylance Pro Cycling’s Sheyla Gutierrez and Rachele Barbieri having a laugh as the rain starts to fall. Emilie Moberg and her Team Hitec teammates make their way to sign in. Julia Soek enjoying the final sign in of the race with her Liv-Plantur teammates. Chloe Hosking (Wiggle-High5) ready to defend her leader’s jersey in the last stage of the 2016 Tour of Chongming Island. Crowds are still out in numbers despite the horrible conditions. Long straight roads joined together by seven wide ninety degree turns make up the 11 kilometer circuit for the final stage of the 2016 Tour of Chongming Island. Chasing through the tree lined streets. The fluo orange bikes of Alé Cipollini really stand out in the grey weather of stage 3 in the 2016 Tour of Chongming Island. The peloton stretches and compacts but any breaks are shortlived. Ilona Hoeksma (Parkhotel Valkenburg) sprinted to third in stage 3 of the 2016 Tour of Chongming Island and is really happy about that! Dutch UCI team Parkhotel Valkenburg did really well in stage 3 of the 2016 Tour of Chongming Island, with five riders in the top 15, including third and fourth place. Ting Ying Huang (Chinese Tapei team) gets to take the blue jersey home after two stage wins in the 2016 Tour of Chongming Island. Not just yellow for Chloe Hosking (Wiggle-High5), she also wins the green jersey (with matching helmet). More success for Parkhotel Valkenburg in the Tour of Chongming Island: in addition to two podium places, Jip van den Bos wins the U23 jersey! Women’s WorldTour standings after the Tour of Chongming Island

The Women’s WorldTour continues on May 19th at the AMGEN Tour of California.