World champion Peter Sagan was alone, at the front of the race, with 60 kilometres to go.

The possibilities seemed endless halfway through Stage 7 of the Amgen Tour of California, a demanding 175km circuit that began and ended in Santa Rosa, and delivered 3065 metres (10,055 feet) of elevation gain across six categorized climbs, but a long, flat run-in to the finish.

In the end, however, Sagan (Tinkoff) was caught, Alaphilippe (Etixx-QuickStep) held his race lead, and Alexander Kristoff (Katusha) sprinted to his first stage win at the Amgen Tour.

The Norwegian’s eighth win of the season came after a strong chase, and then perfect lead-out, by his Katusha teammates, with GC man Jurgen van den Broeck and finally Michael Morkov delivering him to the line. Danny Van Poppel (Sky) was third on the stage ahead of Mike Teunissen (LottoNL-Jumbo) and Bryan Coquard (Direct Energie).

“It was a hard day, and this guy was really strong,” Kristoff said, nodding at the world champion sitting next to his left at the post-race news conference. “We were having trouble [catching] him and for me it was more than enough just to sit in the back.

“I was suffering all day, and in the end I was quite tired,” he said, “but I knew everybody else would be tired also.”

“I was surprised looking by my side at the finish line and I saw him there,” Kristoff said.

Sagan had been alone on the road since he broke away from a six-man break with just under 60 kilometers left. He built as much as a two-minute lead on the peloton, but Katusha and Direct Energy came to the front after the last of the day’s six climbs and closed the gap to just over a minute. At that point Sagan conferred with Tinkoff sport director Patxi Vila in the team car, sat up and was caught with just under 19 kilometers to go.

“I was asking [Vila] who is pulling, he said it’s one or two teams, and that it’s impossible to go alone, with that wind, and with a lot of KOMs in the legs,” Sagan said. “so I said I’ll try to recover and do my sprint.”

The Slovak hid in the main group until the end, grabbing Kristoff’s wheel inside the 3-kilometre mark and just missing out on a finish-line lunge.

“I tried my sprint. If I started my sprint maybe earlier, I could win,” Sagan said.

Alaphilippe saw Dennis jump ahead on the steepest part of the day’s third climb, the second KOM on difficult King Ridge Road. On the verge of winning the first stage race of his career, the 23-year-old said Dennis’ attack was well-timed but not panic-inducing.

“Rohan attacked on the hard part, and I wanted to stay behind,” Alaphilippe said. “My teammate [Petr] Vakoc was with him, and I was not stressed. It was a long way to go, and I was in the group.

“Everyone wants to make the race harder for me,” he added. “Today was really hard, the last big opportunity to make a big difference.”

Dennis knew if he was going to drop the Frenchman and take yellow, the timing was perfect.

“We wanted to put some teams on the ropes, especially QuickStep and Alaphilippe, and I felt, ‘Why not?’” Dennis said. “Everyone had been attacking and at that point there was this massive lull where everyone were just really tired and needed to take a breather, so I said now is the time and I went.

“It was good, I had Vakoc with me. The only issue was a few other teams helped Alaphilippe pull it back and didn’t actually make him do the work, him being in the yellow jersey.”

There were several feints and parries at the start of the 175-kilometer stage, but a true breakaway didn’t stick until the fifth climb of the day, the third category Seaview Road. Sagan and Greg van Avermaet (BMC Racing) lit out with George Bennett (Lotto NL-Jumbo), Rob Squire (Holowesko) and Krists Neilands (Axeon) and Javier Mejias (Novo Nordisk). The group opened a lead of as much as 1:30 on the 10-kilometer plateau between the Seaview crest and the plunge down Meyers Grade Road to Highway 1 and the Pacific Ocean.

The gap closed to 50 seconds with 70km left when Direct Energie took the lead of the reduced peloton that chased the Sagan group briefly inland after the small finishing village of Jenner and back toward the ocean.

There, Sagan sensed the steam leaking from the break.

“They were pulling very slow in the flat. I don’t know if they wanted to save energy for the final, but I told them we have to go, otherwise the group is coming [and] we will be caught,” Sagan said. “Nobody was working very well, [so] I told them, OK, I will go alone.”

With the Pacific Ocean on his right side, Sagan attacked with about 4km to go before the day’s second intermediate sprint. Less than one kilometre later he made the left turn away from the water and up third-category Coleman Valley Road, which peaked at with 52 kilometres to go but stayed lumpy for the next 15.

Sagan said the target on his back made the tactics a challenge.

Lawson Craddock (Cannondale), just 1:17 back on GC in sixth place at the start of the stage, made a strong jump from the main group on Coleman Valley Road to join one of Sagan’s breakaway mates, Bennett (Lotto NL-Jumbo). And by the 42 kilometer mark the pair had caught van Avermaet, Squire and Neilands.

“Our plan was to be aggressive, and play off the other teams, and see what they would do,” Craddock said. “At the end of the day, it didn’t look like they wanted to be as aggressive as we wanted to. When I made the move to get across, it was just me. The move was kind of doomed from the beginning, but we gave it our best shot.”

The five riders opened a 30-second lead over the peloton but, driven by Katusha and Direct Energie, the group caught them with 29k left. Ten kilometers later they caught Sagan as group entered the outskirts of Santa Rosa.

“Direct Energie worked all day, a big effort for Coquard, and they asked me to help,” Kristoff said. “With Tiago [Machado) and [Jhonathan] Restrepo pulling, we managed to catch him, and it was all set up well for the sprint.”

The groundbreaking, revelatory, better-than-imagined Amgen Tour of California run 19-year-old Nielson Powless has been enjoying for the past seven days nearly spiraled out of control on the roads around Santa Rosa Saturday, when he punctured, and then was caught up in a crash.

Teammate Will Barta was there to hand over one of his wheels, as he did on Stage 5 on Thursday, while Geoffrey Curran waited to pace him back.

Powless ultimately finished in the front group, preserving his fifth place spot on the general classification, and his best young rider’s jersey, 1:47 ahead of his Axeon Hagens Berman teammate, Tao Geoghegan Hart.

“It was insane,” Powless said. “I got a flat on one of the first KOMs. Then I got into a crash on another one. I spent the first half of the day chasing. It was a big effort. Luckily I had a teammate [Barta] to give me a wheel, and two teammates to pace me back on the first time. The second time I was pretty much isolated. It was pretty much all or nothing today. I figured it will be easier to sit on tomorrow [in Sacramento] but if I lost anything today, it will be harder to bring hit back. I had to give it everything. I’m really satisfied with how today turned out. I’m glad I can still hold this jersey, and in the end, it was a great day.” 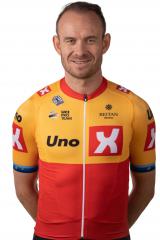