Hours after telling CyclingTips that he didn’t have the same kind of form he’d brought to the Amgen Tour of California in 2015, when he won the general classification, world champion Peter Sagan (Tinkoff) took his second win of the 2016 edition, beating longtime rival Greg van Avermaet (BMC Racing) at the Mazda Raceway at Laguna Seca.

It was Sagan’s 15th stage win in California, a race he’s done every year since 2010, his first year as a professional.

A tough finale splintered the peloton on a day of racing where the riders averaged over 50kph for the stage.

As the peloton turned inland from the long ride along the coast on the Pacific Coast Highway, the category 2 climb of Laureles Grade broke up the bunch. At the front, American Gregory Daniel (Axeon Hagens Berman) was the lone survivor of what was once a seven-rider breakaway that also included former world champion Mark Cavendish.

After a hair-raising 100kph descent, Daniel’s legs hit the off switch as he tackled the steep 16-percent grades on the climb up to the Laguna Seca Raceway.

Once on the Raceway, Nathan Haas (Dimension Date) had a go before Peter Stetina (Trek-Segafredo) accelerated, while BMC Racing’s Rohan Dennis controlled the very select group.

Down the famed “Corkscrew” it was all together, with fearless descender Sagan leading the way. Onto the finishing straight Haas came to the front and opened his sprint from a long way out, but he was unable to hold off Van Avermaet and the world champion. Sagan’s decision to soft-pedal Tuesday’s summit finish on Gibraltar Road suddenly appeared to have been a wide move.

“I have to say thanks to all my teammates, because they were pulling all day,” Sagan said. “Today was 220 kilometers almost, and they were all day on the front. On the last two climbs it was very hard, and then I [was isolated] because all the riders [teammates] had worked before. It was very hard the last two climbs, to be with the climbers. Everybody was attacking, and after we caught them, we came to the descent. The biggest favorite was Greg Van Avermaet and he was always on my wheel. After the last turn I let the guy [Haas] go in front of me, and he pulled my sprint. I am very happy to win.”

Race leader Julian Alaphilippe (Etixx-QuickStep) had a quiet day out, admitting that he had bad legs at the finish. He finished the stage on the same time as Sagan, extending his lead over Stetina to 22 seconds after taking three seconds of bonus time at the first intermediate sprint.

“Oh for sure I try to win every day, but today I was different than yesterday,” Alaphilippe said. “My legs were not so good. On the last climb with 10km to go I was really suffering, so I was not in a really good position for the last two or three corners, and I lost some time. For the last left corner I closes the gap, and I did my best for the sprint, but it was not my best day.”

How It Played Out:

The start of the fourth stage began with a slight mist in the air as the riders rode off from Morro Bay. The longest stage of this year’s race, at 217km, took the riders up the Pacific Coast Highway before they tackled a partial lap of the tricky Mazda Raceway at Laguna Seca.

A stiff wind off the ocean meant for a quick opening hour of racing. No attacks were able to break free and race leader Alaphilippe attentively nabbed the first intermediate sprint of the day to add a further three-seconds to his lead over Stetina.

The breakaway steadily built its advantage to a maximum of five minutes, as Routley, winner of the King of the Mountains competition at the 2014 Amgen Tour, took the first two KOM points over Anderson, with the latter KOM coming with still 140 kilometers to race.

The breakaway and peloton flew through the rolling Pacific Coast Highway as the wind continued to propel the riders.

With 25 kilometers to go the gap to the breakaway had fallen to two minutes, while Etixx-QuickStep and Tinkoff drove the peloton.

Onto the category 2 climb of Laureles Grade, which peaked at a mere 8 kilometers to go, the breakaway fractured. As the peloton hit the base of the climb, an apparent touch of wheels sent GC hopeful Lachlan Morton (Jelly Belly) and one of his teammates to the ground.

Morton got up hobbling, and had to wait for a spare bike to arrive. He would ultimately finish over 10 minutes behind, losing any chance of a solid result in the general classification.

With a dozen kilometers left the breakaway had split apart on the climb with Daniel leading solo. Daniel Jaramillo (UnitedHealthCare) attacked out of the peloton and hooked up briefly with his teammate, Tanner Putt, but when Andrew Talansky (Cannondale) jumped out of the reduced bunch, it sparked interest from the favorites and Sammy Sanchez (BMC Racing) quickly shut down the move.

Riders continued attacking out of the increasingly dwindling peloton in an attempt to gain an advantage, knowing the high-speed descent of Laureles Grade was next. At the top of the climb Daniel held the slimmest of margins, 35-seconds, as he went into his super tuck.

Daniel successfully navigated a tricky chicane at the bottom of the descent, which brought the riders off the highway and onto the climb to the raceway. BMC Racing continued to look strong, as Danilo Wyss took up the pace making.

Haas’ attack on the uphill drag before the Corkscrew garnered Sagan’s attention, before Stetina had a go.

Down the steep sweeping corners of the raceway, Sagan led the select group under the red kite with Van Avermaet on his wheel.

Hass opened the sprint as soon as the riders navigated the final lefthand corner, but Sagan tucked into his slipstream and comfortably came around to take the win.

Van Avermaet’s second-place is confirmation of his returning form, after crashing heavily at the Tour of Flanders on April 3.

“For me, on the uphill sections I tried to follow, as if you know there is a good finish for you, you can always hang on longer,” Van Avermaet said. “So, I tried to get over the climbs and the team did a really good job today keeping the pace pretty high. In the end, there was a little bit of gambling about how the finish would go. I’ve beaten [Peter] Sagan a few times already, but this time he won, so next time I will have to try and beat him again.”

Sagan’s win added to his lead in the points competition, while Evan Huffman (Rally Cycling) retained his polka-dot jersey as King of the Mountains.

Notably, Cavendish’s efforts in the breakaway netted him the Most Courageous jersey as he looks to gain for with a difficult summer ahead in which he hopes to ride in both the Tour de France and Olympic Games.

“The team plan was to get into the breakaway today,” Cavendish said. “We knew we had a good card to play with Nathan, and we didn’t want the team to have to ride. I took a long while for the break to go, and we knew we never had chance of staying away — we knew from the gap and from the TV moto that we were doomed, so we just did our best to represent our sponsors on TV. We made it to the last climb.”

Tour revelation Neilson Powless (Axeon Hagens Berman), who is only 19, sprinted to sixth to keep his best young rider’s jersey and fifth overall on GC.

“After taking into account yesterday and then how my legs felt at the finish today, I think it could be a possibility to get up on the podium, but you know I’m still taking it day by day and we’ll see how I do in the time trial and tomorrow is also a long day, so yeah hopefully it can work out in my favor,” Powless said.

The fifth stage of the Amgen Tour will take the riders from Lodi to the high altitudes of South Lake Tahoe. With the race finishing at over 2,000m and a tough category 3 climb up to the finish, look for a GC rider to possibly get caught out. Sagan and van Avermaet could also have another head-to-head battle. 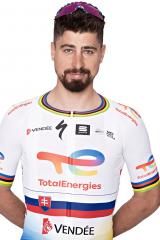