Friday’s 48km (29.8-mile) course in Winston-Salem, North Carolina, was significant in its length, something that Phinney said worked to his advantage.

“It was super difficult and I didn’t really have a lot of fun,” Phinney said. “But that’s how it is with a time trial, and I signed myself up for this event, so I knew what I was getting myself into. Honestly, I didn’t really feel very good. It was a tough mental battle the whole way. I started out super confident, and then lost almost all of my confidence, and then gained it back and then lost it again, and then by the time I was on the way to the finish I had my confidence back. It’s easy to say that now, but that’s what happened. I thought I was going super slow, and started to get a bit down. The course was also three kilometers longer than what it was supposed to me.”

With the win, Phinney is that much closer to earning a discretionary selection to the Rio Games. The U.S. men have only two positions for the Olympic road events, and both riders must compete in the time trial and road race.

If selected, it would be Phinney’s third Olympics; he finished fourth in London in both the road race and time trial.

Since then, however, Phinney has been through a difficult journey, which began on May 26, 2014, with a horrible accident that put his career in jeopardy.

He spent 15 months rehabilitating his left leg — the crash left him with a compound fracture of his tibia, and a severed patellar tendon — but Phinney appears to be back on form.

But Friday’s victory at Winston-Salem is perhaps the most meaningful, both for the significance of returning to nationals victorious, and for the likely Olympic slot it brings.

The Grumari time trial course in Rio is a 29.8km, utilizing parts of the Grumari Circuit used in the road race, including the 1.2km climb of Grumari Road. Elite men will complete the circuit twice, for a total distance of 59.6km (37 miles).

“I’m looking forward to putting the kit on for the first time, hopefully soon,” Phinney said. “I was just here to show myself ahead of the Olympics and try to have a good ride. It’s always good to get an hour long time trial in, which is something you’d never do normally.” 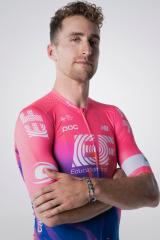