Team Dimension Data Steve Cummings is known as a rider who has a very big engine for long-range attacks, and the Briton showed this once again with a mammoth effort to take the final stage of the Critérium du Dauphiné.

Cummings was part of a 20 man group which went clear inside the first hour of racing and then pushed ahead alone soon after the summit of the category four Côte de Saint-Laurent-du-Cros. This was over 60 kilometres from the finish but despite hard chasing from the break and the bunch, he fended off both.

Crucially, Richie Porte (BMC Racing Team), Chris Froome (Sky) and Alberto Contador (Tinkoff) finished a further five seconds back due to a split in that group in the sprint. This plus the time bonues for second and third meant that both Bardet and Martin overtook Porte in the final general classification.

Froome won overall, with Bardet 12 seconds back in second and Martin a further seven seconds behind in third. Porte and Contador finished fourth and fifth, 21 and 35 seconds adrift.

“I wasn’t really thinking about winning, just about good training for the Tour de France. But I was also thinking that after the climb, maybe the favourites would look at each other and give me a chance. This was the stage I had picked out as the one to go for, and it worked out very well.”

The 35 year old rider also took stages in Tirreno-Adriatico and the Vuelta al Pais Vasco this year, and noted that the Critérium du Dauphiné was both this third WorldTour stage race of the year and his third time to nab a stage.

As was the case since he took over the race lead on Friday, Froome came under repeated attack from others. Contador launched a big move on the day’s penultimate climb, the category one Col du Noyer. He was reeled in but launched a number of other moves, whittling down that group to just four: himself, Froome, Bardet and Porte.

Martin was distanced but chased back on during the descent, as did several others. Importantly, three of Froome’s teammates were there and they helped to keep things controlled until the finishing sprint. As a result he took the third Critérium du Dauphiné victory of his career, following on from wins in 2013 and last season.

“It is a massive satisfaction,” he said. “Coming into this week I hoped I would be fighting for the podium. To be sitting here the last day in yellow is really an amazing feeling.

“The last few days have just been flat out and today was no different. The final there was pretty grippy and it was right down to just a couple of us in front at one stage. But again my team-mates did a great job and got back up there, helping to control to the end.”

Perhaps ominously for his rivals, Froome’s two earlier victories in the event were followed by successes in the Tour de France. That doesn’t guarantee success in July but he’s in a good place physically and mentally as the countdown continues.

There was a flurry of attacks early on, with Dani Navarro (Cofidis) and Jérôme Coppel (IAM Cycling) going clear on the first climb and leading over the top. At kilometre 15 they were eight seconds ahead of 25 chasers, including Pinot, while the peloton was 32 seconds back. However everything was back together three kilometres later.

Soon afterwards seven riders clipped away and from this group Thomas De Gendt (Lotto-Soudal) pushed on ahead. He was caught by a big group of chasers at kilometre 26 and this 20 man group settled down to try to build a lead over the peloton.

From these, Roy beat Grmay to the top of the day’s second climb, the category three côte des Terrasses (km 33.5).

Team Sky initially led the chase but Etixx-QuickStep weren’t happy with the pace as the gap grew to three minutes with 51 kilometres covered. The Belgian team took over and ramped up the speed, hacking the break’s advantage down to two minutes 15 over the next six kilometres.

Teklehaimanot had been leading the mountains classification prior to Pinot’s victory on Saturday and became virtual leader again when he took the prime atop the category four Côte de Saint-Laurent-du-Cros (km. 83). Very soon after, Cummings struck out alone and opened a solid lead. Behind, the others in the move chased hard and this caused the group to split.

Grmay and Kiserlovski were 30 seconds, with Lutsenko, Van den Broeck, Gallopin,Teklehaimanot, Bauer and Voss a further five seconds back.

“At the beginning we had a tailwind,” Cummings said afterwards. “After the climb I attacked on, it was headwind but it was 12, 13 kilometers and I knew if I got through that, I would have a good chance.”

Indeed by the summit of the col de Moissière (cat. 1, km 102.5), he was one minute 40 seconds ahead of Grmay. Teklehaimanot, Van den Broeck, Alexey Lutsenko and Jack Bauer were a further 40 seconds behind.

The Briton continued to maintain his advantage over the chasers. With 27 kilometres left he was two minutes ahead of nine riders, namely a recaptured Grmay, Kiserlovski, Lutsenko, Van den Broeck, Teklehaimanot, Bauer, Voss, Martin and Gallopin. The peloton was four and a half minutes back and despite Etixx-QuickStep’s ongoing chase, Cummings continued to build his lead. With 16.5 kilometres left the chasers behind him were caught by the bunch, which was then five minutes and ten seconds back.

Etixx-QuickStep finally began to reel him in thereafter, using the slopes of the Col du Noyer (cat. 1, km 139.5) to eat into his buffer.

Fireworks in battle for yellow

With 12.4 kilometres left for Cummings, Alberto Contador (Tinkoff) threw down the gauntlet in terms of the general classification battle. He attacked hard, while Dan Martin set off in pursuit. However Team Sky quickly latched onto the Irishman’s wheel, with Chris Froome then dragged the group closer.

Contador continued to push on, holding a lead of several metres over the Mikel Landa-led chase group, which had been whittled right down.

Cummings went over the top with a lead of three minutes 36 seconds. Further back, Froome, Porte and Bardet managed to get back up to Contador, while Martin had been distanced.

Contador wasn’t finished and attacked once again. Froome chased and moved to the front, causing Contador to relent. However the Spaniard was persistent and ramped up the speed soon afterwards, making Martin’s return more difficult.

Bardet put in a move of his own just before the summit, but he was covered. The quartet went over the top three minutes and eight seconds clear of Cummings, while Martin crossed the prime line a further 18 seconds back.

Bardet was persistent and attacked hard on a false flat on the descent, forcing Froome to chase. The yellow jersey brought him back and covered another move by Contador. Soon afterwards Martin, Adam Yates (Orica GreenEdge), Louis Meintjes (Lampre-Merida) and Diego Rosa (Astana) got up to them, making it an eight man chase group behind Cummings.

This further swelled to 12 when three of Froome’s team-mates and Alaphilippe got back up. Team Sky moved to the front to discourage further attacks, but their pace was less than that of Cummings, who increased his advantage again to four minutes and eight seconds.

The Team Dimension Data rider continued to hammer away and came into the finishing straight, giving a thumbs up to the TV cameras and raising both arms across the line.

The big question would be if there would be further attacks behind, and it didn’t take long to find out. Rolland had also got back up the group and fired off an attack, trying to make up for what had been a relatively quiet race.

He had a slight gap going under the kilometre to go banner, but Team Sky inched their way back up to him. Dan Martin then launched a big attack and gapped Bardet, who was chasing hard. Martin took second with Bardet third, both picking up a time bonus.

This proved crucial for the final overall standings: Bardet moved above Porte into second overall and, with a gap opening in the group, Martin overtook the Australian for third.

“It is great timing now to have a win under the belt,” he said. “It does help to build the morale a bit and build the team around me. There is still work to do before July but all the right things are there now.” 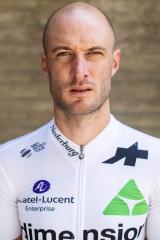