Alberto Contador (Tinkoff) may have fired the first shot on Sunday in the Criterium du Dauphine prologue, but Chris Froome (Sky) stamped his authority over the Dauphine on Friday, showing his own chamber is full and ready for battle. Froome captured the stage win over his ex-teammate and friend, Richie Porte (BMC Racing), and distanced all other of his rivals including Contador.

“It’s an amazing feeling,” Froome said. “It’s always good to win a race before the Tour de France. The team rode very well today to take me to the final climb in the best position. They set it up perfectly for me. Richie [Porte] was able to follow me. I didn’t expect to gain time on Alberto Contador on such a short climb but I know from past experiences that he never gives up. We’ll see what he’s got tomorrow. There’s still a hard stage to come tomorrow so I haven’t won the Dauphiné yet.”

Froome’s characteristic leg-searing accelerations came to the fore on Stage 5, as the defending champion put most his rivals in difficulty with less than three kilometres to finish, except for Porte. Froome and Porte would work together over the final kilometres of the category two climb to the resort in Vaujany to distance the others.

Froome then got the best of Porte in the sprint for line and take over the lead in the general classification, as the high-pace and accelerations seemed a little too much for Contador. The Spaniard crossed the line 21 seconds behind, finishing alongside Adam Yates (Orica-GreenEdge), who won the sprint for third on the day, and Dan Martin (Etixx-QuickStep).

The fifth stage of the Criterium du Dauphine began in La Ravoire and traveled 140 kilometres to finish atop the category two climb to Vaujany. Seven categorized climbs awaited the riders, including the finishing climb, making the stage for the riders fighting for the general classification.

Aggressive racing ensued for most of the day with Daniel Teklehaimanot (Dimension Data) fighting for the many KOM points on offer. The South African would finish the stage with the King of the Mountain’s jersey firmly on his shoulders.

“I like the polka dot jersey a lot,” Teklehaimanot said after the stage. “So I’m really happy again today. I won the King of the Mountains competition last year. Of course it’s my goal to win it again this year. Tomorrow it’s very hilly. I’ll try to keep the jersey but it won’t be easy. What I and my team achieved last year gave us a lot of motivation to perform again this year at the Dauphiné and the Tour de France.”

With 55 kilometres to go in the stage a group of five formed at the front of the race with Andriy Grivko, who was once part of a 25-rider escape, Cyril Gautier (Ag2r-La Mondiale), Dayer Quintana (Movistar), Enrico Gasparotto (Wanty-Groupe Gobert) and Bartosz Huzarski (Bora-Argon 18). Tinkoff led the peloton in support of yellow jersey holder Contador and kept the leading five close at hand, with the group never gaining an advantage of more than three minutes.

In the charge to the base of the climb, the teams of Orica-GreenEdge and BMC Racing came to the fore, as Tinkoff had done the majority of the pace-making for the last 40 kilometres.

Gasparotto attacked his breakaway companios with less than six kilometres remaining in the stage and only Quintana was able to follow the Amstel Gold Race winner, but Quintana was soon distanced too. Meanwhile, Mikel Landa (Sky) attacked out of the peloton.

Less than four kilometres to the finish, Landa caught and dropped Gasparotto, as a select group of favorites had formed behind. Missing were several notable climbers and potential contenders for the overall entering the race: Fabio Aru (Astana) Thibaut Pinot (FDJ) all faltered, unable to hold the high-pace on the climb.

Martin opened the finale with an aggressive attack with three kilometres to go and brought back Landa, while Contador and Porte followed the Irishman with apparent ease. Froome appeared to be in difficulty and chased hard to the leaders with white jersey holder Julian Alaphilippe (Etixx-QuickStep) stuck to his wheel.

Froome caught the leaders and immediately accelerated past, putting everyone in difficulty. Initially, it appeared to not do too much damage, but the he went again and only Porte was able to follow.

The duo worked well together to distance Contador and the others. The Tinkoff rider looked horrible, his body swaying all over his bike, looking for every ounce of energy.

In the finishing straight, Porte led Froome up the final drag to the line, but the Sky rider sprinted past and took the stage victory along with the yellow leader’s jersey.

Froome leads Porte by seven seconds in the general classification with Contador in third at 27 seconds.

Alaphilippe finished the stage in a chasing group 27-seconds behind the winner, and stayed firmly in the lead in the Best Young Rider classification.

“[Froome] was so impressive that I couldn’t follow but I’m glad I managed to retain the white jersey,” Alaphilippe said after the stage.

Saturday the peloton of the 2016 Criterium du Dauphine again goes climbing. The sixth stage from La Rochette to Méribel includes five categorized climbs, including the hors category Col de la Madelaine midway through the stage. The finishing climb is brutal at 12.3 kilometres and an average gradient of 6.6%. Attacks from the favorites are almost guaranteed with the general classification still close. 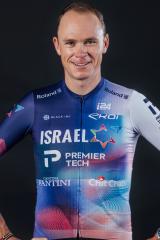