For one man on the podium, timing was everything. For the other two, it was a matter of wondering what might have been.

After a breakaway was caught in the final hundred metres of Stage 2 of the Criterium du Dauphine Tuesday, Jesus Herrada (Movistar) timed his finishing kick to perfection to take the victory. Behind him, Tony Gallopin (Lotto-Soudal) and Serge Pauwels (Dimension Data), both from the breakaway, were left fighting for scraps after their late-race breakaway was caught in sight of the finish line.

“I tried to keep as much strength as I could for the finale,” Herrada said. “I knew how it would be at the end, so I didn’t want to waste any energy to be at 100% for the sprint. We came across to the breakaway guys 500 metres before the line. Dani [Moreno] attacked, I finished it. I’m very happy. Tinkoff worked all day and Etixx-QuickStep rode hard before the [second last] climb. The finale suited me well. It was all about coming fresh to the last kilometer.”

The second stage of the Criterium du Dauphine provided a hilly affair with a category 2 climb and a category 3 climb to the finish in Chalmazel-Jeansagnière packed into the finale, with only a false-flat separating the two climbs.

Heading in to the penultimate climb, Etixx-QuickStep took over chasing in the peloton and the gap began to tumble down with strongmen Tony Martin and Niki Terpstra doing the bulk of the work. The Belgian team appeared to be attempting to set-up their puncheurs Dan Martin and Amgen Tour of California winner Julian Alaphilippe, who is also leading the best young rider classification.

On the Category 2 penultimate climb, with less than 20 kilometres to go, Gougeard and Huzarski attacked their breakaway companions; soon after Gourgeard chose to set off alone. Etixx-QuickStep continued to drag the peloton along and had brought the gap down to under two minutes.

Former world champion Michal Kwiatkowski (Sky) attacked out of the peloton in pursuit of Gougeard. He stormed by the other dropped breakaway riders, but did not make much headway in front of the peloton, never gaining more than a 15-second advantage.

At the summit of the penultimate climb, Gougeard held an advantage of 55 seconds over a chase group, as Gallopin, Pauwels, and Fabric Jeandesboz (FDJ) had bridged to Kwaitkowski. The peloton, now led by BMC Racing, was 1:15 behind.

There was no time to relax for the riders, as the road continued to dip and roll, with no true descent on the way to the finishing climb. The final climb to Chamazel-Jeansagniere was 6.8km, but averaged a scant 3.7% gradient.

Gougeard was caught by the five-rider chase group, as Huzarski had been caught and latched on, but soon thereafter Gougeard was dropped, unable to lift his pace.

Heading into the final kilometre, only Gallopin, Pauwels, and Jeandesboz remained in the lead and they appeared set to fight for the stage win, with now chasing riders Sergio Haeno (Sky) and Daniel Navarro (Cofidis) 15 seconds behind.

As the fatigue set in after some began their sprint too soon, Herrada was able to capitalize on the fading riders and gallop to the victory, easing up at the end with plenty of time to celebrate. Pauwels and Gallopin each recovered enough to complete the podium.

“I’m so happy to have won in such an important race, against so many talented riders,” Herrada said. “The pace during the stage was steady, without any real drops, but despite Tinkoff leading for the whole race, there was some point when the breakaway got five or six minutes, and that forced Etixx to take the lead and push hard. That rhythm before the climbs left only one chance and one thing to do for us: follow the wheels and save energy until the ascents.

“I knew the finish, I kept in mind that it was so good for me, but at the same time, I couldn’t spend a bit of energy more than I should, because I only had that one opportunity: the sprint. I tried to save that bit for the end and succeded to keep myself calm until the final 500 meters, when Dani attacked, the break was finally caught and I saw my place to try the move into the final turn. I’m immensely happy with how things played out.”

Alaphilippe, who was pegged as a possible stage winner, was philosophical about the day’s outcome, which was marred by a crash between Ag2r La Mondiale teammates Romain Bardet and  Alexis Vuillermoz, and saw the Etixx rider cross the line in 28th, two seconds back.

“It was really full gas in the last kilometers,” he said. “There was a small crash after the flamme rouge because it was nervous in the finale. Dan Martin and I touched some guys and needed to brake. At the end, I don’t lose any time so it’s fine. I lost a few positions, and it was hard to make it back to the front. The race was really fast and hard so it wasn’t possible to go for the stage victory. However I gave it all until the finishing line. Had I been in a better condition, I would have been positioned better and I would have fought for the victory but I couldn’t. I wouldn’t say I’m disappointed by my feelings. We’re not a lot of riders in the first group at the end so I have no regret.”

“Today it was all about positioning. I don’t have the speed in the legs yet, but it’s been a good day of training in that perspective. It was a complicated stage at the end, with climbs to finish and some riders at the front. There was some wind and the terrain was up and down all day. When Sky attacked, it wasn’t a problem for us. We have the yellow jersey but we don’t mind losing it now, especially if we get it back on the last day. It was more about maintaining the rhythm of the race, and passing one more day without any problem.”

The third stage of the Criterium du Dauphine is another rolling stage, but a tricky finale awaits the riders before they finish in the town of Tournon-sur-Rhône. A tough Category 2 climb comes in the final 25 kilometres, but a fast descent should see a reduced bunch sprint. 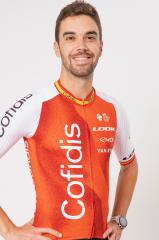