Ninety-one women took the starting line in Sourthwold, England, this morning for the first stage of the third annual Aviva Women’s Tour. With the world’s best cyclists among them, the fight for the tour’s yellow leader’s jersey was going to be a tough one.

Without a live stream however, we joined the many women’s cycling fans online and followed the action via Twitter. From images, race radios and other accounts we followed a nail biter of a finale that saw Cylance’s Alison Tetrick off the front for nearly 20 kilometers, but getting caught within the 1km-mark as the peloton thundered toward the finish line in Norwich. In the sprint, it was Christine Majerus (Boels-Dolmans) who crossed the line first ahead of Marianne Vos (Rabo-Liv) and Giorgia Bronzini (Wiggle-High5).

Stage 1 departed from the coastal city of Southwold, which is in county Suffolk. After being host for the final Women’s Tour stage in 2014, the county has been hosting the Women’s Tour opening stage for two years in a row now. A new 360 degree camera was used to make this unique shot of the riders ready to depart at 10:00 a.m. GMT this morning.

Great 360 pic of the riders all lined up on the start line! #AvivaWT2016 pic.twitter.com/SFguOxmOo0

Only 12.1 kilometers in, the first QOM was on the route. Maximum points were taken by Parkhotel Valkenburg’s Ilona Hoeksma, with Tayler Wiles (Orica-GreenEdge) and Lisa Klein (Cervélo-Bigla) in second and third place.

Ellen van Dijk (Boels-Dolmans) suffered a puncture early in the race, already having to work hard to chase back within the first hour of racing.

An unfortunate puncture has affected Ellen Van Dijk who is now chasing to rejoin the peloton #AvivaWT2016 pic.twitter.com/cgdVaJJhAM

With the stage well underway, first predictions of the winner of this stage were tweeted, these two both suggesting the same winner.

A familiar sight along the route of the Women’s Tour: school children ready to wave at their favourite riders.

The pupils at St Mary’s School in Lowestoft are ready for the arrival of @thewomenstour @EDP24 #AvivaWT2016 pic.twitter.com/HTYGD0X2UY

Breaks formed and were caught again in the first hour and a half of racing. With the peloton complete, the first intermediate sprint came up. The 3-2-1 points plús bonus seconds were taken by Marianne Vos (Rabo-Liv), Gracie Elvin (Orica-AIS) and Lizzie Armitstead (Boels-Dolmans) respectively.

Just after this intermediate sprint, a small crash occurred, with both Elvin and Orica teammate Alexandra Manly involved.

#AvivaWT2016 Crash! Elvin & Manly down but chasing back on to the peloton now. pic.twitter.com/R7i4mV3XHU

All crashed riders were soon back in the peloton and the employees of Epic Tools watched on as the peloton passed their store around noon.

Through another win in the second QOM sprint, Hoeksma secured the Strava QOM jersey, while Tayler Wiles (Orica-AIS) and Valentina Scandolara (Cylance Pro Cycling) are now second and third in the QOM classification.

As Sarah Connelly points out, many more Strava QOM’s are taken throughout the entire Women’s Tour.

At 84.5 kilometers, Liv-Plantur’s Leah Kirchmann, who just renewed her contract with the team for two years, took the second intermediate sprint.

But with the majority of points for this jersey awarded at the line, the winner of today’s stage would be the one wearing the Chain Reactions Cycles points jersey in stage 2.

With 20 kilometers to go, Alison Tetrick (Cylance Pro Cycling) accelerated off the front and quickly created a gap of 25 seconds as the peloton didn’t react. Her lead increased to almost two minutes at the 8 kilometer mark. The teams started riding at front at this point, but Tetrick didn’t succumb straight away. As the peloton entered the final kilometer, a crash brought down several riders, while Tetrick only held a 200 meter advantage at this point.

The peloton closed in on her just in time for Christine Majerus (Boels-Dolmans) to win the stage, ahead of Vos and Giorgia Bronzini (Wiggle-High5) in a full out sprint for the finish. 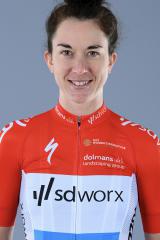 That makes Majerus the fourth Boels-Dolmans rider to win a Women’s WorldTour race, after Armitstead, Chantal Blaak and Megan Guarnier.

Majerus also leads the GC now, with 1 second over Vos and 6 seconds ahead of Bronzini.

The Women’s Tour standings after stage 1 Tomorrow’s stage is the longest in the 2016 Women’s Tour, with 140 kilometers and a considerable number of climbing meters to add to that. Time differences in the GC could be made here!

During the stage, the peloton passes Meriden, home to the National Cycling Memorial. The stage finishes in Stratford-upon-Avon, the birthplace of the famous William Shakespeare.