Celebrating its 31st edition, the 2016 Tour de Beauce did not disappoint in providing a week of aggressive racing. While the WorldTour teams prepare for the Tour de France, Beauce is a race for North American teams and riders to step into their own and prepare themselves for a successful summer of competition.

The 185-kilometre opening stage of the race set the tone for the week to come. The parcours featured a tough 14.7-kilometre circuit, which included a tough 15% climb through the town of St-Odilon.

“We proved today what we are capable of doing. Guillaume, I hope you’re well and this win is for you,” Räim said in honor of teammate Guillaume Boivin, seriously injured in a crash on Saturday at the GP Saguenay.

Nielson Powless (Axeon Hagens Berman) won the bunch sprint for sixth, 1:16 behind the winner, as five-rider breakaway that was able to survive to the finish.

“It’s an honor to win on such a prestigious climb,” said Kuss. “A lot of big names have won on Mont Mégantic and it feels amazing to be on that list. It also feels great to finish off a great day of teamwork and repay the team’s faith in me to go for the win.

Daniel rode himself inside out on the finishing climb and came home in 12th, 1:13 behind Kuss. The effort was enough for him to pull on the leader’s yellow jersey.

The two-part third stage included a morning time trial and an evening road race. Powless scorched the 19-kilometre time trial in the morning with a winning time of 24:39. Daniel was able to retain the leader’s jersey by a mere seven seconds over Hugo Houle (Canada National Team).

“The first half of the time trial was hard for me,” Powless said, “but luckily it was a tailwind on the way out and headwind on the way back. I started feeling better at the turnaround.

“My legs felt a bit more snappy and it gave me some confidence to know that I was feeling good going into a headwind. The one-kilometer climb with two kilometers to go on the way back gave me a chance to empty whatever I had left in the tank. So when I crossed the finish line there was not much else to give.”

Michael Rice (Garneau-Quebecor) captured the evening 78-kilometre stage, which ended at the top of the 178th Street “wall” in Saint-Georges. Daniel finished second and kept the yellow jersey, as Isaac Leblanc (Lowestrates) rounded out the podium.

“It’s a beautiful day, a great victory for the team,” Rice said after the stage.

“I did not know what the plan was. It was really hard but the crowd helped us,” said Raim.

The final stage of the 31st Tour de Beauce demonstrated who was the strongest rider of the race. Daniel sprinted to victory over Houle, who attacked multiple times on the final lap of the final stage circuit in Saint-Georges.

“There were very strong guys here, especially Hugo. I am very proud of my team. They did the job,” said Daniel of his overall victory. 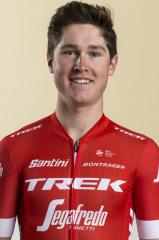 Stage 1 featured eight laps around the rolling farmland of Saint-Odilon.

The peloton climbed the steep hill in Saint-Odilon eight times, setting the stage for a week of climbing.

Holowesko/Citadel put three riders in break during Stage 2, the queen stage to Mont Megantic, but couldn’t come away with the win.

After missing the break at the start of Stage 2, Lupus was forced to lead the peloton on the chase across the rolling hills of the Megantic region.

In spite of just barely being out of juniors at age 19, Nielson Powless held his own in the break, working to set up Daniel on the final climb of Stage 2.

As the road turned steep on the slopes of Mont Megantic, Lachlan Morton, Sepp Kuss and Greg Daniel came to the front of the final group.

With a little over one kilometer to go, Lachlan Morton couldn’t shake Sepp Kuss from his wheel. Kuss would attack with 200 meters to go to take the stage win.

Celebrating his first big win at a UCI stage race, Sepp Kuss comes across the line alone at the summit of Mont Megantic.

Daniel collapsed at the finish line at the summit of Mont Megantic, but his effort put him in the yellow jersey for the week.

Mountain bike buddies, Nielson Powless at age nineteen, and Sepp Kuss at all of twenty-one, both won a stage and rode strongly all week.

Nielson Powless continued to impress after a strong showing at the Amgen Tour of California. He won the time trial, and rode in support of Greg Daniel all week.

Axeon riders on the front during the Friday night stage west of Saint-Georges.

Geoff Curran, Nielson Powless and Logan Owen worked the front of the peloton to chase the break for Greg Daniel during the criterium.

Greg Daniel led Rob Squire and Miguel Byron of Holowesko/Citadel through the a corner in the criterium.

The final stage of Tour de Beauce often sees teams attack relentlessly and the yellow jersey changes hands. With Logan Owen and Nielson Powless on the front for Greg Daniel, Axeon was able to withstand numerous attacks and keep Daniel in yellow.

On the final stage at the end of a long week of climbing, Nielson Powless had enough left to help Axeon protect the leader’s jersey.

Canadian Rob Britton was happy to show newcomer Sepp Kuss the ropes at the Tour de Beauce, and at the same time marvel at his ability.

Daniel stayed aggressive all week, including diving through a corner on Stage 5.

Making a strong statement in the final stage, Greg Daniel won the sprint over Hugo Houle to secure his yellow jersey.