Yesterday’s Stage 1 offered a finale full of suspense, with the peloton slowly closing in on lone leader Alison Tetrick (Cylance). Even without live images, following the stage through social media, the excitement was palpable. The peloton did catch Tetrick in the final 100 meters of the stage and Christine Majerus (Boels-Dolmans) was the first to cross the line.

After the stage, Tetrick wiped away her tears as she was so close to a Women’s WorldTour victory.

What the highlights also showed, was a less than perfect situation with cars and motors in the sprint to the line. When Tetrick passed the flamme rouge, some ten vehicles were still between her and the peloton. The moment Tetrick was caught, another four vehicles were among the riders still.

It wasn’t the fair sprint we were hoping for. So even though Majerus won fair and square, I hoped for a different kind of sprint in today’s stage. Or maybe a small break to stay away until the finish. I was especially keen to see whether Emma Pooley (Team GB) would try something.

It was a nervous stage, with a high paced race over wet and windy roads. Pooley didn’t make it into the final break and was in a group that crossed the line almost five minutes behind the winner.

The stage turned out to be a Dutch party, with Wiggle-High5’s Amy Pieters winning the sprint of the 25 rider lead group that formed at the second QOM. With the bonus seconds Vos collected at the intermediate sprints and the finish line, she now leads the GC and will start in the Aviva yellow jersey tomorrow.

With a substantial amount of climbing, the Warwickshire stage in the south of the county is the longest of the 2016 Aviva Women’s Tour and would surely be a good early indicator of who could win the Women’s Tour this Sunday. Two QOM sprints and two intermediate sprints were in store for the riders today. Although Majerus and Vos held an equal amount of points in the points classification after stage 1, Majerus led the classification as she won the stage. However, Vos wore the Chain Reaction Cycles points jersey in today’s stage, as Majerus obviously took to the start in the Aviva yellow leader’s jersey.

The peloton left Atherstone at 10:00 a.m. GMT and passed Meriden some fourty minutes later, a village that isn’t just home to the National Cycling Memorial.

FUN FACT: We’re in Meriden which is geographically the centre of England! #AvivaWT2016

Heavy rain started to fall as the peloton arrived at Warwick University. What I love about the Women’s Tour is that it takes the peloton to all these important places and institutions of the country. It really brings (women’s) cycling to everyone’s doorstep, which surely is part of the race’s popularity.

What a great moment! We hope the Warwick crowd spurred the cyclists on! #AvivaWT2016 pic.twitter.com/YbRLFbS7Bm

Some last minute preparations were made for the first intermediate sprint of the day and it was Lotta Lepistö (Cervélo-Bigla) who passed it first, followed by Majerus and Vos. Cervélo-Bigla tweeted that Lepistö informed the team by yelling “I got it!” through the team radio – not hard to image how the friendly Finnish champion enthusiastically said it.

Elena Cecchini (Canyon-SRAM) led the peloton as it made its way through Warwick, looking behind to make sure other riders spotted the obstacle in the middle of the road too.

After an unsuccessful attempt to break away together with Esra Tromp (Parkhotel Valkenburg), Emilia Fahlin (Ale Cipollini) – who secured a spot in the Swedish team for the Rio road race – attacked again not much later, but was once again caught as the first QOM of the day commenced: a 1.9 kilometer climb, followed by a technical and wet descent.

As Katie Hall (United Healthcare) arrived at the top first, with Alena Amialiusik (Canyon-SRAM) and Lizzie Armitstead (Boels-Dolmans) in her wheel, the peloton splintered on the climb and the following descent. The peloton wasn’t given any rest, with more climbing following swiftly.

Another unclassified climb of 14%. Only short, but the cumulative effect will finish some.#AvivaWT2016

The speed in the peloton remained high, all the way to the sprint for the Chain Reactions Cycles points classification. Although the riders are certainly aiming for these points too, Vos took some important bonus seconds for the GC by winning the sprint.

Now only one QOM sprint remained and this short and informative video by the jersey’s title sponsor shows you all you need to know about that climb, where a maximum of six points were up for grabs.

Although the pace in the peloton never slowed down, Amalie Dideriksen (Boels-Dolmans) and Malgorzta Jasinska (Ale Cipollini) were able to break free ahead of this QOM and had a 45 second advantage at the bottom of the climb.

Dideriksen and Jasinska reached the top together, but the duo was joined by 25 riders at 20 kilometers from the finish line.

It was the incredible speed and the hilly course that caused the peloton to split, but the weather certainly wasn’t helping either.

Despite some late attacks, the lead group arrived at the finish line together. On the wet roads, it was Amy Pieters (Wiggle-Honda) who just got the better of Lisa Brennauer (Canyon-SRAM) and Vos, crowning herself winner of the Women’s Tour stage 2. 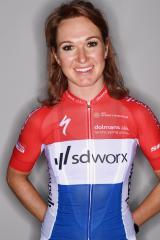 Vos was called to the podium not only to collect the points jersey, but also to receive the Aviva yellow jersey, as she now leads the GC. Once again she got to put on the yellow leader’s jersey in the Women’s Tour, the race she won in 2014. Are we looking forward to Vos’ first Women’s WorldTour stage race victory?

The Women’s Tour standings after stage 2

Stage 3 is a short one, only 112 kilometers in length. But is has some 2,000 meters of climbing, which makes it the Queen’s stage of this year’s Women’s Tour. The race moves through the Peak District National Park, so be sure to check out our photos and videos of the stage, as this area in England is truly beautiful.