After a couple of days of quieter performances, Thibaut Pinot (FDJ) showed he is on course for a strong Tour de France when he won the penultimate stage of the Critérium du Dauphiné. The Frenchman outsprinted compatriot Romain Bardet (Ag2r la Mondiale) to the line at Méribel, with these two being the lone survivors of the day’s big break.

Dan Martin (Etixx-QuickStep) was the best out of the main bunch, dropping the other GC contenders to take third, one minute and four seconds back. Chris Froome (Sky) was three seconds further back in fourth, with Louis Meintjes (Lampre-Merida) and Alberto Contador (Tinkoff) fifth and sixth, one minute 15 seconds back.

Richie Porte (BMC Racing Team), who had been Froome’s closest rival at the start of the day, weakened inside the final kilometre and rolled in one minute 21 seconds behind Pinot. However he managed to hold second overall.

“To be honest, I didn’t know this would happen,” Pinot admitted after the finish. “I couldn’t plan it. I didn’t have the same sensations as the last couple of days…I had much better legs today, so I decided to go for it.

“We worked well together. We collaborated, even though I didn’t understand some of the later tactics. I managed to get revenge at the end.”

Portee was referring to how things played out on the final climb. Part of the day’s break since the day’s first climb, these were later joined by Bardet, who became race leader on the road. The latter attacked on the final ascent, jumping clear inside the last ten kilometres. Pinot was the only one able to get up to him and collaborated but, rather than concentrating on chasing yellow, Bardet attacked repeatedly towards the end to try to get the stage.

Pinot was able to match Bardet and then came around him in the sprint for the line.

Froome and his Sky team had a nervous chase, knowing that Bardet had started the day just one minute 34 seconds back. The gap narrowed sufficiently by the line for the Briton to retain yellow, 21 seconds ahead of Porte and Bardet.

Porte and Bardet are second and third overall, with Martin fourth at 30 seconds, and Contador down to fifth, 35 seconds back.

It sets things up for a big fight on the final stage, Sunday’s mountainous 151 kilometre stage to Superdévoluy.

“I’ve been put under pressure but the guys were super controlled,” said the Briton. “I really owe it all to my teammates today, each of everyone of them emptied themselves for me to keep this jersey. The pressure started when Alberto [Contador] attacked on the Madeleine. We had to pull him back otherwise we’d be in trouble. And then even in the finale with [Romain] Bardet up front. At one stage he was going to get the yellow so my guys had to get that gap down.”

Once that was achieved, he had to look at those who had started the day closer to him in the general classification. “Dan Martin went to the line for third place. I just did everything I could to try and follow him. I was surprised to see there was a bit of a gap to Richie and Alberto. I definitely needed those extra seconds ahead of tomorrow.”

Alberto Contador (Tinkoff) was one of those looking to make up ground on the stage, with the Spaniard losing the race lead to Chris Froome (Sky) on Friday’s stage.

A total of 158 riders took the start, with one opting not to continue in the race, namely Bora-Argon 18 rider Dominik Nerz.

Froome started the day with a seven second lead over former teammate Richie Porte (BMC Racing Team) and 27 over Contador. The green jersey was worn by Edvald Boasson Hagen (Dimension Data) and the red and white mountains jersey by teammate Daniel Teklehaimanot. The best young rider was Julian Alaphilippe (Etixx-QuickStep).

Andriy Grivko (Astana) bridged across alone soon afterwards, while Naleau was dropped. These riders were two and a half minutes clear at kilometre 14.5, 2.5 kilometres from the summit of that first climb.

Teklehaimanot beat Grmay and Pauwels to the top of the climb, adding to his mountains lead. He was also first to the top of the Grand Cucheron, beating Grmay and Pinot. The break’s lead had been three minutes 15 seconds but had dropped to two minutes 50 seconds by the start of that climb. The break’s content had been boosted by two more riders Luis Leon Sanchez (Astana) and Jan Bakelants (AG2R-La Mondiale), making it 27 out front.

The gap hovered just below three minutes towards the Col de la Madeleine. At the bottom of the climb there were fireworks when Contador and Fabio Aru (Astana) attacked. Contador had teammate Jesper Hansen with him, while these were joined by Joaquim Rodriguez (Katusha), Dayer Quintana (Movistar) and Bjorn Thurau (Wanty).

Voeckler was dropped by the break on the climb, with Minnaard, Grivko, Benedetti, Soler and mountains leader Teklehaimanot also shelled. In the Contador group, Quintana and Thurau also went south.

Froome and his Sky team moved to control Contador and after 62 kilometres of racing, the peloton reeled in Contador, Aru and Rodriguez.

Closer to the top, Aru and Contador kicked clear again. Out front, the number of leaders had been whittled down to 17 by the slopes and from these, Pinot beat Chérel, Vervaecke and Pauwels to the top. One minute 15 seconds later Romain Bardet (Ag2r La Mondiale) went over the summit, having slipped clear of the bunch. Seven seconds later Contador and Froome summited, with the latter catching the former.

On the descent Chérel, Vervaecke and Pinot pushed ahead but the latter was unable to keep up. Pauwels went past him and caught the other two, while Pinot was joined by 15 others including Aru. These were 40 seconds back, with the peloton at two minutes 10 seconds.

These three leaders were caught by the chasers just before the start of the Montée des Frasses, but the unified group was reduced by the slopes.

The Ag2r La Mondaile trio of Bakelants, Chérel and Bardet rode hard on the climb and with the latter having started the day just one minute and 34 seconds back, he was race leader on the road. The Froome group was two minutes and five seconds back with 35 kilometres to go.

Pinot, Bakelants and Bardet led over the top of the Montée des Frasses (cat. 1, km 113), while the Froome group went over approximately three minutes back. Aru had been caught and was dropped.

Nervous moments for Froome as Pinot battles Bardet for stage

Starting the final 12 kilometre climb, ten riders were left out front and the battle was very much on for both the yellow jersey and the stage. Ag2r La Modiale continued pushing the pace, knowing that Bardet could be going into the yellow jersey. These held a gap of two minutes 50 seconds, over a minute more than the Frenchman needed.

With ten kilometres to go the gap had dropped somewhat to two minutes 24 seconds, but there was still a lot of ground to be made up.

Bardet surged and was chased by Pinot, who got close but then slipped back. However he didn’t panic and steadily worked his way back up, joining with 8.5 kilometres to go. He caught his breath and then moved to the front, joining the pacesetting.

Behind, Team Sky was chasing steadily and with eight kilometres to go, they were two minutes and six seconds back. Meanwhile contenders such as Porte, Contador, Dan Martin and Julian Alaphilippe (Etixx-QuickStep) were still there and ready to play their cards.

Team Sky ramped up the pace with six kilometres to go and, one kilometre later, this saw Bardet and Pinot’s lead down to one minute 47. However over the next 1000 metres it was only reduced by a further three seconds, showing that the leaders were resisting well.

Bardet appeared the stronger of the two leaders but Pinot continued to contribute. They went through three to go with a lead of one minute 40 seconds; very soon afterwards Bardet attacked, surging clear. However Pinot got back up to him with 2.7 kilometres to go, and resisted a further surge.

With two kilometres to go the gap was continuing to drop. The leaders were just one minute 28 seconds ahead at that point, moving the pendulum back in Froome’s favour as regards the yellow jersey.

Disgruntled by the attacks on him, Pinot was refusing to work with Bardet and resisted another surge with just over a kilometre left. Going under the kite the Froome group were a minute and a half back, and nobody had yet tried to jump clear.

Froome then took over, knowing that he was fighting to hold his lead. Porte, Contador and Martin – the riders in second, third and fourth overall – sat on his wheel, looking for a chance to move.

Out front, Bardet opened the sprint. Pinot gritted his teeth and got past, taking the win. Behind, Martin attacked hard and while Froome was able to cover him, the surge gapped the others. The Irishman continued to drive hard and dropped Froome before the line, taking third.

He was one minute and four seconds back, while Froome was a further three seconds behind.

Once the time gaps and bonuses were added up, Froome was confirmed as holding yellow. Porte and Bardet end the day 21 seconds back in second and third overall, while Martin was forth at 30 seconds. Contador slipped to fifth, 35 seconds back.

The final stage of the race will cover 151 kilometres from Le-Pont-de-Claix to Superdévoluy and features six climbs. The fourth and fifth of these are category one ascents, although the concluder is a third category climb and may not cause the same splits as Saturday’s final climb.

This may however set things up for earlier moves, leading to another nervous day for Froome and Sky.

“It would be amazing to win the Dauphiné for the third time tomorrow, especially in the build up to the Tour de France,” he said. “But I don’t take anything for granted. If tomorrow is anything like today, it’s gonna be a really tough stage tomorrow again.” 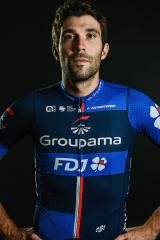