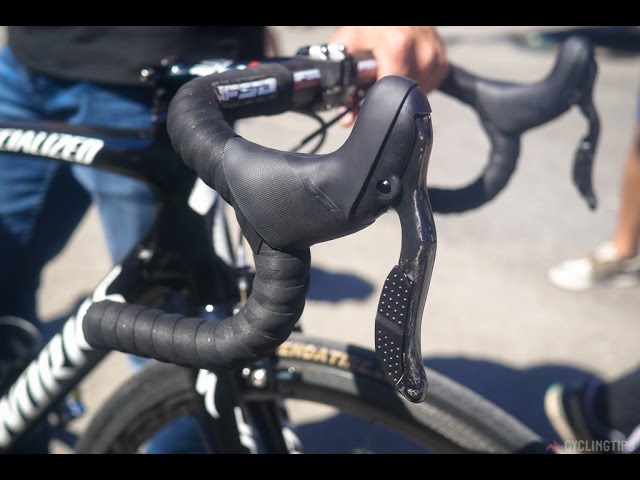 FINHAUT-EMOSSON, Switzerland (CT) – At the start line of the Tour de France’s 17th stage, teams Direct Energie and Cofidis, and ex-pro and now technical coordinator at Tinkoff had the latest FSA groupset on display. Team Bora-Argon 18, another team sponsored by FSA, will have Shane Archbold racing the stage 18 mountain time trial on the new groupset.

Two years ago we spotted a prototype version of the new groupset and then, at last year’s Tour, Etixx-QuickStep and Bora-Argon 18 both had a bike equipped with a prototype model for a single day of racing. The latest incarnation of the long-awaited groupset is just a few tweaks away from production, according to Damiano Spinelli, FSA’s team liaison support.

The groupset will get its first public showing at the Eurobike trade show come late August. We were one of the first non-FSA personnel or sponsored riders to give the groupset a quick ride with FSA (and Ivan Basso) kind enough to allow us a five-minute ride around the team bus area.

Five minutes clearly isn’t enough time for an extensive review, but it did give us a rough idea of how the shifting performed and how well the brakes work.

First, the details. The thing that stands out is that it is a partly wireless set up. The brake levers are not wired to the battery or either of the derailleurs. Instead, the levers are wireless, talking via ANT+ with what is, in essence, the junction box. This is incorporated into the front derailleur.

The front derailleur is powered by a seattube-based battery, which is also wired to the rear derailleur. Levers are powered by watch batteries which, we’ve been told, should last up to two years. The battery is claimed to have a single-charge lifespan of between 4,000km and 6,000km.

Exact weights were not given but should apparently be comparable to, if not slightly lighter than Shimano’s top-tier Dura-Ace Di2. We are inclined to believe this as Ivan Basso’s bike didn’t feel any heavier than a standard pro bike, and that was with the inclusion of another FSA tech treat: an adjustable seat post (more of that in a future Tour de France Tech article).

Shifts are performed by a rocker button on the levers. The position of these buttons is no different from any of the other electronic groupset manufacturers. The lower part of the button is for shifting down the cassette to a smaller gear (i.e from a 21 to a 19), and the upper button shifts upwards. The texture is pitted enough and the size of the button is big enough to know you have your fingers on it. Shifting with winter gloves shouldn’t cause mis-shifts.

One push equates to one gear and holding the button skips through the gears and does quickly engage each gear. The left lever controls the front derailler as you’d expect and works in the same manner.

Lever blades, which are unidirectional carbon, will also come in two lengths, depending on hand size. The longer levers, we are told, will be more suited to sprinters. Due to Shimano patents there won’t be any satellite shifters available when the groupset is released. A time trial-specific shifter will be available though.

The front derailleur with the control box is where you switch the groupset on and also includes LED lights to show how much battery life you have left. Running out of juice on a ride will force the front derailleur into the inner chainring.

Chainring sizes, both standard and compact, will be compatible with the groupset and cassette sizes up to 28-tooth are currently supported. FSA is working on changing this so it will accept a 32-tooth cassette.

The seatpost-mounted battery should charge in one and a half hours, but this is the only battery option available at the moment.

Before the Tour Shimano announced its latest Dura-Ace Di2 groupset, the 9150. One selling point in the groupset is the “Full Synchro Shift,” an intelligent system that will shift between the front chainrings as you shift up or down the cassette, to ensure that your cadence remains consistent. The system should also eliminate the crossing of gears. Risto Usin, Bora-Argon 18 mechanic, told us that the FSA groupset has a similar feature.

The brake calipers were existing K-Force units that FSA announced early last year, featuring a novel dual-pivot linkage design and clearance for rims up to 28mm wide. The release lever is also neatly tucked away in the centre top area of the caliper.

We were also told by Spinelli that there will be a new chainset released along with the groupset though no one at the tour is using it as yet. We will keep our eyes peeled during these last few days at the Tour, but suffice to say FSA knows what it’s doing with chainsets — it has been a leading brand in this market for years now.

In the short period we got to ride Ivan Basso’s bike, the impression the groupset gave was one of a product that needs a final few flourishes to make it production-ready. Front shifting was as snappy as you’d expect from a premium groupset. The rear shifting, though, seemed a little slower that Dura-Ace Di2. The multi-shift too felt a little slow, though very positive with engaging the gear.

The hood shape felt immediately comfortable and not too dissimilar to Shimano — the shape fitted the hands well. Reach to the buttons was as you’d expect and the buttons themselves felt very refined and intuitive in their operation.

Obviously, we didn’t get to ride around the start pits at high speed so the braking performance didn’t get put under any extreme pressure. But initial impressions are that the brakes are direct in their performance.

It’s exciting to finally see a new player enter the electronic groupset market with a product that looks like it could compete on some level. The four years FSA has had it in development shows the company is dedicated to offering a performance product.