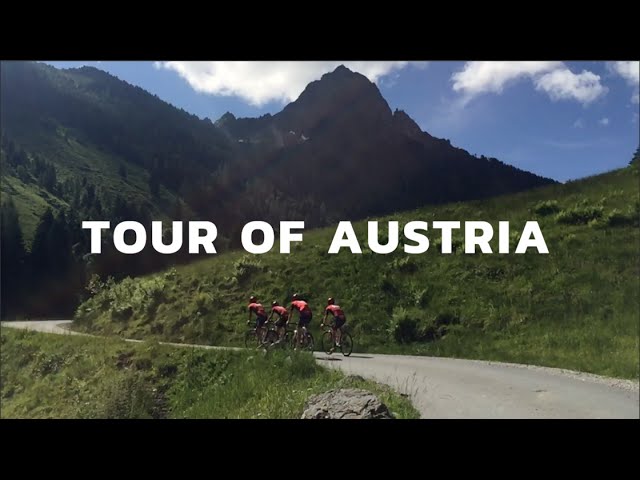 Adam Phelan’s Video Diary: A guide among the chaos

High-speed descents, jostling for position in a final sprint, the very real risk of crashing — road cycling is an undoubtedly dangerous sport. And when it comes to putting yourself in harm’s way for the sake of your team, it’s often a case of placing fear to one side, and simply focusing on the job at hand.

In his latest diary post for CyclingTips, Drapac Pro Cycling’s Adam Phelan takes us back to the recent Tour of Austria and the commitment required to put his teammate, Brendan Canty, in a position to take his first professional victory.

There is always a tipping point in a bike race where you just have to ‘switch off’. Like a lamp being unplugged in a darkened room, part of your conscious brain needs to be disconnected. You have to go to a place where your focus is so narrow that logical thought is drowned out by more primal and instinctive actions and reactions.

Here, in this moment, you are never more aware of your surroundings: the wheel in front of you, the rider who leans his body against you, the kerb a hundred meters ahead, a spectator with a dog on the right. And yet, somehow, simultaneously, you are almost completely removed from the actions you are taking. It is often the only way to cope in the chaos that is racing.

Because more often than not, it’s really really scary. It’s dangerous and tumultuous. If you become too aware of this reality, you’re useless — you just can’t do your job. Other riders can sniff out fear in their competitors and they will use your fear to their advantage. You absolutely must keep your cool.

Sprint finishes are the epitome of these moments: they are all risk, all chaos and urgency. Yet it’s here where controlled teamwork is paramount. You have to have a plan, a sense of collective commitment. Switching off that part of your individual consciousness is vital.

The blue skies of the Austrian summer look down on us as we snake along the winding road. It’s five kilometres before the beginning of a climb when a rider, in red and blue, slams into the kerb and flips into the air. Like a grenade exploding, the crash rips a hole in the peloton as riders swerve, skid and brake to avoid the same fate. I look down at my Garmin – 65km/h, and only a few kilometres until a tight right-hand corner marking the beginning of the final ascent to the finish. Riders push against me from both sides. I push back. The real race has just begun.

My radio crackles in my ear: “Boys, three kilometres until the corner – we have to be leading into there, with the climbers in tow.” I take my eyes off the road ahead to glance over my shoulder. Two of our climbers are sitting close behind me, blindly following my wheel. Relying on me to get them to the climb in the right spot – to deliver them safely through the chaos with as little energy expended as possible.

Moments earlier, I had followed my teammates before me in the same way, and now closer to the climb, it was my turn. It was time to switch off and just get the job done.

As we approach the climb the peloton becomes a stampede of bodies and bikes, pushing forward in constant waves. The adrenalin-pumping power of the racing peloton always amazes me. It is here – at the height of the chaos – that timing is vital. One mistake and the whole team effort would be for nothing.

Ahead of us a man in fluorescent clothing waves a flag and blows a whistle frantically on a traffic island; a crowd of spectators screams and cheers over the barricades that outline the turn. I can see the start of the climb looming only a few hundred metres further on. I push hard on the right of the peloton. Right behind me is Brendan Canty.

We hit the corner, the sound of screeching brakes cutting through the air. I am now at the front of the pack, Canty behind my wheel, as the road turns violently upwards. A rider from Italy attacks off the front – this is the moment the peloton has waited 180km for. At this point my task is painfully simple: “Get to the front and go as hard as you can.”

Three kilometres before the finish line my job is done; my tank is empty. De-oxygenated, my legs turn to lead, I pull right, my speed wipes cleanly away as if I have just hit a patch of wet concrete. Brendan Canty, sitting a wheel or two further back, launches his attack and shoots off the front before other riders can mount a counter attack [ed. see 12:20 in the video below.]. A small peloton drifts ahead of me and out of view as the switchback road cuts into the mountain.

It is only then, my day done and my job complete, that my conscious mind begins to flicker back on. Even this is a slow process. I begin to notice things again: the view from the mountainside, green and rich with life, the famous devil that dances atop the mountain, how bloody tired my legs really are. Riders will glide between these states of mind over and over again, like chameleons walking on the forest floor.

As I slowly regain my breath, as the outside world slowly comes back into focus, my radio crackles. I hear what I’ve wanted to hear, what we’ve all been working for: “Canty won! Boys, well done! We won!”

As cyclists, we are often blind to the ridiculousness of professional cycling – we are the daily inhabitants of a strange and closed world uniquely our own. A world in which waking up and not being sore is unusual, a world in which extreme tan lines and lean, fatless, often salt-caked bodies are the norm. And yet, as we move forwards through this circus, moments will arise where suddenly the true absurdness of it all just slaps you in the face.

Whether is it pushing the limits on a crazy descent towards the bottom of a climb for your teammate, or guiding him into position through the chaotic jungle of riders around you; whether you have to keep hold of a wheel another team is pushing in on, or, as was the case on the fifth stage of Austria, you have to ride through a mini-mountain of flipped-up cow shit as you manoeuvre the team towards the front in preparation for the final climb, it is all part of the job, one way or another.

At times you have to switch off to get the job done, but when it all comes together, when each piece of the jigsaw puzzle falls perfectly in place and a teammate crosses that finish line in first place … well, that indescribable, triumphant, ‘switched-on’ feeling is worth it all.