Illness swept through the peloton ahead of the early, foggy morning start of the Vårgårda road race today.  Cervélo-Bigla’s Ashleigh Moolman-Pasio and Joëlle Numainville sat out the race as did  Marianne Vos (Rabo-Liv), who was feeling ‘unfit to race’.

This meant that Chantal Blaak (Boels-Dolmans) was the only one returning winner in the mix today, but lots of other riders were aiming for a Women’s WorldTour victory, too!

The winner eventually came from a nine rider lead group, with Emilia Fahlin (Aé Cipollini) beating Blaak and Lotta Lepistö (Cervélo-Bigla) on the line. An incredible achievement as she had tried to made several attacks as well but found her sprinter legs in the end. She was able to celebrate her Women’s WorldTour win in front of a home crowd. 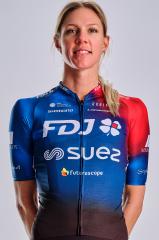 With two important riders of the team missing, Cervélo-Bigla’s Nicole Hanselmann chose to attack early in the race instead, perhaps drawing from a newfound confidence after her stage win in the Ladies Tour of Norway last week. She led solo until the peloton caught her again at the second gravel section.

With the bunch complete, new attacks came from riders who didn’t want to wait for a bunch sprint. Jessica Allen (Orica-AIS) and Marta Tagliaferro (Alé Cipollini) quickly gained an advantage of 10 seconds, but Boels-Dolmans led the chase and reeled the duo back in ahead of a third gravel section.

As the sun broke through the fog and the roads dried up, a group of favourites rode away from the peloton in the final gravel section, including Anna van der Breggen (Rabo-Liv), Ellen van Dijk (Boels-Dolmans), Trixi Worrack (Canyon-SRAM) and Leah Kirchmann (Liv-Plantur).

Despite having some of the peloton’s strongest riders, the break did not stick. But this move did cause the peloton to split and a new lead group of nine riders formed as the final four local laps commenced.

With nine different teams represented in this group, including all the big ones, this looked like the definitive break, and indeed the advantage quickly grew to 1’10”.

But the seconds came down throughout the four local laps and with only 40 seconds left at around 20 kilometers to go, it was going to be exciting to see whether the front group was able to hold off the peloton until the finish. During the penultimate lap, the advantage got reduced to 30 seconds.

At the bell lap, the advantage of the front group got a little bigger again, 42 seconds and a duo of Roxane Knetemann (Rabo-Liv) and Dani King (Wiggle-High5) went for a bridge. Dangling between the peloton and the lead group, Knetemann and King had made their move too late and didn’t reach the leaders before the line.

Emilia Fahlin (Alé Cipollini) had the support of the home crowd and outsprinted Lepistö and Blaak, to take her first win since the 2013 Swedish road race championships.

Just no words for this feeling today! Pure happiness! pic.twitter.com/gX2kE5HZ40 “There wasn’t great cooperation [in the nine-rider group] all the time, but sometimes it was OK,” Lepistö explained after the race.

“I feel like Emilia and I did most of the work in the breakaway. I think Emilia was having super legs today and she took the last corner first and had the most speed and could hold the 300 metres in the front. I was trying to pass her so badly but I just died, my legs were totally empty.” Still, Lepistö is happy with second place and hopes to be an inspiration for young riders from neighbour country Finland. “I’m super happy! I think the team had a super result today after starting with only four riders. It was a nice day for us. I’m really emotional about this win because I did this race before I turned professional in 2008 or 2009 and was dropped on the second lap already and now I’m on the podium so I hope this encourages the young Finnish riders.”

There was more disappointment in de Boels-Dolmans team, Blaak unable to repeat her win of 2014. “It wasn’t the result we wanted, but it was a good weekend all around,” Blaak said. “The team time trial win was the highlight, of course.”

“It’s always hard in a group of nine,” noted Blaak. “You never know what will happen. You have to follow your instinct and hope for the best. I thought I had better chances from the breakaway then from the bunch and so did some of the others. We picked up the pace on the second to last lap. We went fast on the climb. It hurt.”

Only two Women’s WorldTour races left on the calendar! As UCIWWT leader Megan Guarnier (Boels-Dolmans) is 240 points ahead of the number 2 in the ranking, teammate Lizzie Armitstead, she already secured her win in the Women’s WorldTour!

But Guarnier will also take to start in the GP Plouay next Saturday, so there is a chance of her adding a fourth Women’s WorldTour race to her impressive results list of 2016, after the Amgen women’s Tour of California, Philadelphia Cycling Classic and the Giro Rosa. If she does, both her and Armitstead have won four Women’s WorldTour races each (stages not included). The inaugural Women’s WorldTour finishes on September 11 at la Madrid Challenge by la Vuelta, for which the 19 teams that take to the start have been announced this month.