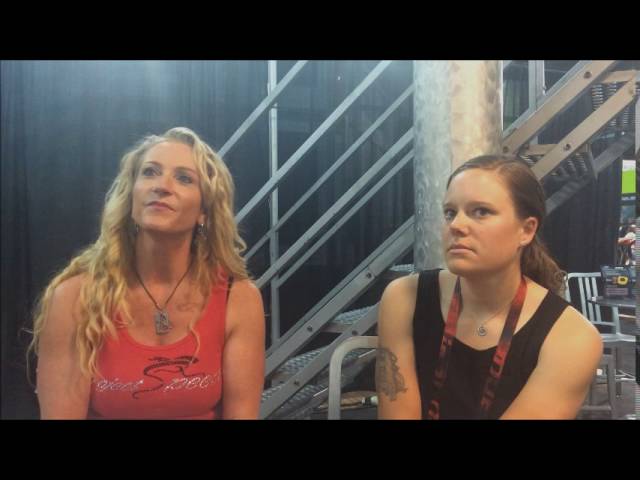 One-hundred-and-forty-seven miles per hour. That’s a little over 236 kilometres per hour for the metric-minded among us and, in layman’s terms, really friggin fast. For someone who has never driven her car faster than maybe 100 miles per hour (160 km/h), let alone taken a bicycle anywhere near that speed, I find that number unfathomable.

But that’s exactly how fast American cyclist Denise Mueller went earlier this month when she was drafting behind a modified Land Rover SVR in Utah’s desolate Bonneville Salt Flats.

Together with her female driver, professional auto racer Shea Holbrook, Mueller set the fastest paced bicycle land speed record ever recorded by a woman. And, in catching up with Ella CyclingTips barely two weeks after the event, Mueller revealed that being the fastest woman isn’t enough; she’s going after the men’s record of 167 mph (268.7 km/h) next.

The paced bicycle land speed record was invented by Charles Murphy, who drafted a train to set a 60 mph (96.5 km/h) record at end of the 19th century. In 1938, Frenchman Alfred Letourneur increased the record to 91 mph (146.4 km/h) while riding behind a motorbike in a velodrome.

Nearly five decades later, in 1985, three-time Olympic cyclist and Mueller’s coach, John Howard, increased the record to a whopping 152 mph (244.6 km/h) while drafting behind a dragster car on the Bonneville Salt Flat.

No woman had ever attempted to take on the paced bicycle land speed record before Mueller.

A self-proclaimed speed demon and adrenaline junkie, Mueller competed as a downhill mountain biker when she was young and continues to excel in fast criterium racing, and she credits her parents for her fearlessness.

“My mother was a powderpuff demolition derby race car driver in the late sixties [and] jumped out of an airplane for the first time on her 80th birthday. My dad, at the age of 70, rode his bicycle around the outer perimeter of the United States, 12,100 miles [19473 kilometres] in 9.5 months,” Mueller told Ella CyclingTips. “So when people ask why I would want to go after this, it’s almost natural because of my history of being a downhill mountain biker and loving speed and my parents. Having parents who achieved those kind of things I have never been limited.”

The idea to go after the paced bicycle land speed record, however, wasn’t her own.

“I wish it was my idea but I have to credit my coach [1995 record holder and US Bicycle Hall of Famer John Howard]. As soon as he told me that no woman had done it before I said I’m on board, I’m doing it,” said Mueller.

What intrigued Mueller, aside from the honour of being the first woman ever to set this record, was the challenge.

“I love challenging myself in a way that is unique,” she said. And going 147 miles per hour behind a car certainly qualifies as such. To reach triple-digit speeds on natural terrain, the bike needs to be much more sturdy than a lightweight aero bike.

In fact, Mueller’s bike more closely resembles a chopper than it does the speedy bikes we’ve seen in the various UCI world hour record attempts.

Custom built, Mueller’s 33-pound (15kg) KHS bike sports an elongated frame, a downhill fork, little 17-inch wheels (43 centimetre) for a lower center of gravity, a dampening seatpost and two absolutely massive 60-tooth chainrings on a double-reduction gear system. These chainrings allowed Mueller to keep her cadence at 102 rpms, even as she was topping out at 147mph.

Getting up to speed

As with Howard’s record-setting ride in 1995, the Project Speed team headed out to Utah’s Bonneville Salt Flats to make use of the smooth-surfaced desolate space. But even there, the team had only a four-mile (six-kilometre) straight track to work with. So, to get Mueller up to speed quickly, Mueller was towed behind the car ahead of her until she reached the speed of 90 mph (144 km/h). She then released the tether and continued to pedal in the draft of the car, which, with its tail fairing, shielded Mueller from wind resistance and allowed her to increase her speed until the track and her legs ran out.

With Mueller sitting so close to the car, Holbrook’s expert driving was an integral piece of the record. Any small change of pace could disrupt Mueller speed or, even worse, cause a dangerous high-speed crash.