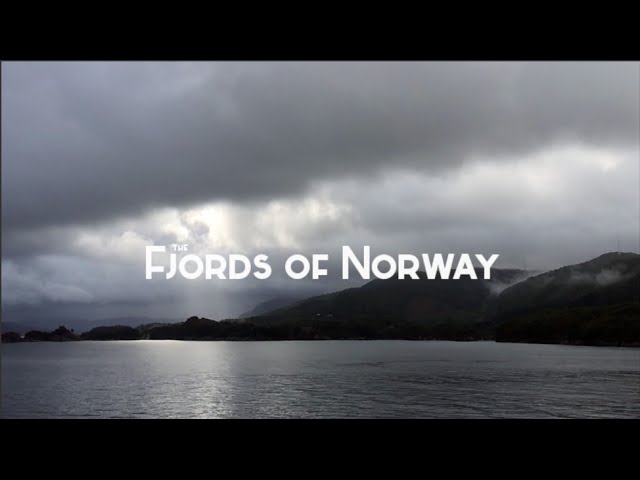 Adam Phelan’s Video Diary: And the rain did fall

Speak to most pro cyclists about the many countries they’ve raced in and they’ll tell you they all tend to blur together. When you’re racing your bike, there’s little time to look around; to appreciate your surrounds. The wheel in front of you looks the same wherever you are.

But for Drapac’s Adam Phelan, to ignore the sights and sounds that each country brings is to neglect part of the experience of being a pro cyclist. Sure, racing bikes is the primary concern, but as Adam reminds us with this look-back at the Tour des Fjords, we can all benefit from looking around us every once in a while.

The rain began to fall early in the morning. It was heavy, thick and cold. I was sitting in the Drapac camper van, my feet resting on the couch opposite. I looked out the fogged window to my right, trying to imagine how it could be any different.

I was in a small town 60 kilometres from the city of Bergen – the main city on Norway’s wild Baltic coast – tucked in alongside one of its many fjords. The houses spotted up along the mountainside – all white, maroon and dark blue – seemed at home among the grey sky. I took out my phone and checked the time. It was 20 minutes until the start of the first stage of the Tour des Fjords.

The air tasted wet as I opened the door. I breathed it in, paused. A small boy, he couldn’t have been more than seven, walked by me. He was only wearing shorts and long-sleeve T-shirt. It would have been close to 10 degrees and I watched him walk casually along the harbourside, the cold wind blasting against the shoreline in heavy waves. It was summer in Norway!

Three hours later, my lungs are burning. My eyes sting, the view in front me is a blurry montage. Water cascades down onto the road. I spit out mud. I am close to the front of the peloton, though we are 10 or 12 riders wide. A tunnel approaches. A deep roar erupts when we reach it, the contained space of the tunnel amplifying everything.

“Wrong way!” I hear someone yelling from behind us. “Wrong fucking way!” Another voice yells.

I turn and look behind. The peloton is fractured as riders stop and turn around from the rear of the bunch. Others crash and slide along the wet ground. Everyone’s yelling now. It is a circus of bikes and bodies going this way and that.

A motorbike flies past us. A man on the rear seat has his arm extended, pointing to a road behind us. He is half-panicked, almost jumping up and down from his seat. He’s blowing a whistle over and over.

“That way! That way! Out of the tunnel – go back!” Outside the tunnel, a cold rain still falls.

Later that day, I sit on my bed in my hotel room. A large pile of clothes rests on the floor outside the bathroom, a small puddle of water accumulating around it. My Bont shoes, glistening from the wet, are on the window sill, several pages from the Aftenposten newspaper stuffed inside them.

Will Clarke, my roommate for the week, stands at the entry to the bathroom, his own wet cycling shoes cradled in his hands.

“It’s still bloody raining!” he says. I sit up and look out the window, the rain battering against the glass surface and flowing down it in a constant stream. Looming over the town are the mountains, dark, heavy clouds wrapped around them like a scarf.

“I don’t think it is ever dry here man,” I say. He looks across at me, an air of frustration on his face.

“Think you’re right,” he replies. “As long as we go the right way tomorrow. I don’t think I could do extra k’s in this weather.”

“What are you complaining about, you’re Tasmanian.” That night we are sitting at the restaurant table, our plates full with food. Peter Koning – my teammate from the Netherlands – sits opposite me.

“Did you hear about the tunnel tomorrow?” he says. “Apparently people had panic attacks in there last year, some guys had to stop.”

“Yeah, isn’t it 250 metres below sea-level in some places?” Will asks.

“Yep … that’s worse than Holland!” Koning laughs. He pulls a glass over and fills it with sparkling water.

Metres before the tunnel, a rider lifts his right hand and does the sign of the cross. He looks at me, the peloton flying into the darkness. “Good luck,” he says. It takes a few moments for my eyes to adjust. My Garmin pauses as it loses satellite contact.

Everything is dark, the other riders around me turning into shadows. We cut through the still air, the sharp hum of wheels echoing as we descend under the sea. Faster and faster we race.

Six kilometres later the tunnel-road turns upwards. The soft golden lights fixed to the roof above us glow like fireflies in a night sky. The shadows of riders fly up the road, the peloton thins and stretches under the pressure. It teeters on the edge of breaking. I suddenly find it hard to breathe; the walls of the tunnel close in on me.

Ahead, I see no exit, just the long line of lights flowing further along the tunnel. The road is dead straight. Up and up it goes, towards a point that has no visible end.

Here in the darkness, there is no physical context for my pain, no clear visual reality to put my suffering into perspective. This makes everything worse. I just wait for the light – pushing hard near the front of the peloton as it splinters and cracks.

Where is the light?

Days later, the rain is still falling. We are nearing the final 30 kilometres of the day’s stage. The peloton is depleted and tired, mud-stained faces squinting against the ever-wet sky. We are racing along the edge of the narrow fjord; to our left a blue, open expanse of water, waves crashing against the rock-faced shoreline; to our right, the mountains reaching sharply towards the sky, clouds slowly snaking along their jagged fingers. I cough. I can taste the earth in my mouth.

The road here is cut into the mountainside. Ahead, a deep rumble begins to build. We turn the corner and the rumble becomes a crashing roar. The road ahead disappears from view. A huge waterfall is thundering over it, the water still ice-cold from the glacier melting hundreds of meters up the cliff-face.

We race straight through the guts of the tumbling waves. All I can hear is the roar of the waterfall as it swallows us whole. Then it’s just flashes of water and the multicoloured jerseys of other riders close by, softly outlined through the rush of wet like dripping ink. Moments later we appear from the other side, somehow more drenched than we were before, spread out across the road.

The rider next to me looks over, his mouth dropping open, smiling. “Fuck me, that was crazy!” he says to no one in particular.

I look back up the mountain and although we are nearing the end of the stage, the moment seems to freeze for an instant – the road covered in white crashing water, the molten sky half-hidden in the grey clouds, here and there sunlight trying to break free. And we riders, wet and cold, racing along the bare landscape of the Nordic fjord. It’s all there, paused forever like a still photograph.

After the stage, we board a white ferry moored to a wooden dock just a hundred metres from the finish line. The fjord spreads out on either side. I sit near one of the windows looking out. Other riders are using their phones to take photos. Even though we have layer upon layer of clothes on, some of us are still shivering from the cold that has taken over our bodies.

The ferry pulls away from the dock, the motor rumbling underneath as we drift into the mouth of the fjord. A blanket of soft rain falls over us. From my bag, I grab the book I am reading. The title, in bold dark letters, takes up much of the front cover. Some Rain Must Fall.

I had been consumed by it in the weeks leading up to the race; it was an autobiographical epic by the famed Norwegian writer Karl Ove Knausgaard about his struggles living as an impoverished student in Bergen.

Bergen, the very same city where my own Norwegian adventure had begun. I had breathed the same air Knausgaard had. I had felt the same heavy and ever-present awe and gloom that he had felt, and had written about. The words suddenly had a new kind of weight to them, a texture of real, lived life. I re-read the title, having not given it much thought before this very moment. “Some rain must fall”. “Some?” I thought. I guess it must have been a dry spring that year. The ferry begins to heave up and down against the roughening water. The waves crash against the window next to me. There are still a couple stages to go. A teammate tells me the forecast looks brighter in the coming days.

I stand up and move to the back of the ferry, opening the door and walking up to the viewing platform on top. The cold rain swirls around me. Sam Williams and James Oram from One Pro Cycling are standing by the railing. I join them and look out at the mountains that climb straight up out of the water. We stand there swapping stories about our day and the ones before it.

We don’t talk about where we finished, or the time we gained or lost. We don’t talk about power or race data. Instead we speak about how harsh the weather is here; how dramatic, powerful the landscape is. We talk about the crazy speeds we reached in those endless, dark tunnels, and about our claustrophobia. The chaos on the first day; the sickness that nearly ended the race for some. It is these memories that are etched into our minds.

We are laughing about it all as our hotel comes into view through the mist. It is perched on the edge of the water, tiny, toy-like, dwarfed by the mountainside rising above it.