GEELONG, Australia (CT) – Three years of the Cadel Evans Great Ocean Road Race, three very different results. In 2015 it was a sprint from a group of just eight; in 2016 we had a solo winner; in 2017, the race’s first on the WorldTour calendar, it was a much bigger group that contested the finish.

But it was very nearly another solo rider that won today’s race.

German sprinter Nikias Arndt (Sunweb) was the first across the line in bayside Geelong, dashing to the fore from a group of more than 20 riders. In doing so he caught lone leader Cameron Meyer (KordaMentha-Australia) mere metres from the line.

Meyer had attacked from the lead group on The Esplanade with just 600m to go and for a time it looked like the West Australian had ridden his way to victory. It was a move very reminiscent of the one that decided the Australian Road National championships a few weeks earlier.

“I knew it was a headwind and it was a similar sort of finish to the Nationals how Miles Scotson won and I thought ‘Oh I’ll try my luck with the same thing.’” Meyer said post-race. “I’m not a pure sprinter so I knew there was quicker guys in the group. Unfortunately I needed 10 meters less of the race …”

Meyer was caught so close to the finish line that he managed to hold on for third place, despite the pace of the sprinters coming from behind. Arndt timed his run to perfection, using Meyer’s slipstream to propel him to the finish. Simon Gerrans (Orica-Scott) was hot on his wheels, finishing in second.

The moment you think you might win a World Tour one day race. So happy with 3rd today and enjoying my summer of racing. pic.twitter.com/UBiJBKYyYC

For Arndt, the victory was made all the sweeter by the fact he was dropped in the closing circuits around Geelong. The presence and support of his teammates helped him battle back to the front and be there to contest the win.

“I thought it’s not possible to come back anymore but I just didn’t stop fighting,” the 25-year-old said. “I just pushed and then I saw also a teammate just after the last climb, Wilco Kelderman, was still around me, and he pushed me and he was doing a big pull. And then I thought ‘Okay if he did such a big pull, you also have to come back. You cannot give up now!’ and then I just continued.

“I also have to say the group in front slowed down a little bit and that was my advantage to come back. But the last lap I did not believe myself really in it [being able to come back] but I just said ‘Ok, I will fight for it.’”

The peloton that started the three closing circuits in Geelong was bigger than many expected, the bunch crossing the start-finish line roughly 1:20 behind a breakaway of four riders. Conor Dunne (Aqua Blue) had instigated the move, attacking as soon as the race began, and he was soon joined by Alex Porter (KordaMentha-Australia), Angel Vicioso (Katusha-Alpecin) and Kirill Sveshnikov (Gazprom-Rusvelo). The quartet’s lead briefly reached 10 minutes but the leaders were kept well under control by the work of BMC and Orica-Scott as the race headed back towards Geelong.

On the first time up Challambra Crescent, the closing circuit’s steepest climb, Sveshnikov and Vicioso were dropped, leaving just two out front. Calvin Watson (Aqua Blue) joined his teammate Dunne and Porter out front at the start of the second 20.2km lap, but the race was all back together the second time up Challambra.

The attacks came thick and fast from that point on, with several groups forming at different times. Reigning Tour de France champion Chris Froome (Sky) was off the front in a small move at one point, but like all the other moves, he was soon caught.

The final ascent of Challambra Crescent, 13km from home, thinned the bunch out somewhat, but it was still a group of 20 that descended off the other side. The attacks continued but it wasn’t until Richie Porte (BMC) went hard that it seemed as if one might stick.

The Tour Down Under champion spent nearly 3km out front on his own but with his friend and former teammate Froome chasing, the Tasmanian was caught with 1.4km to go. Meyer’s attack was the last of the day as the sprinters readied for what was ultimately a rather chaotic finish.

“It was such a tricky sprint with the headwind,” Gerrans said after crossing the line. “No one really had any teammates left so it was a really dicey sprint.

“Everyone was just ducking for wheels and trying to get out of the wind. Nikias went from a long way out — I think he did the whole sprint in the seat — and in the end I had nothing left. I couldn’t quite get past him.”

The victory is Arndt’s third at WorldTour level, after a stage of the Criterium du Dauphine in 2014 and a stage of the Giro d’Italia last year. He builds now towards the start of his European season where he’ll be hoping to add his palmares.

The Australian summer of cycling concludes next week with the five-stage Jayco Herald Sun Tour. It begins on Wednesday evening with a prologue individual time trial in the heart of Melbourne, before four road stages throughout Victoria. The race is likely to be decided on stage 1 which concludes with a nearly 30km climb to the Falls Creek Alpine Resort. 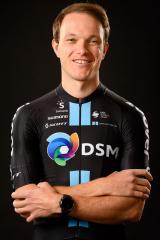