FALLS CREEK, Australia (CT) – In the past few seasons Damien Howson (Orica-Scott) has made a name for himself as a reliable and hard-working domestique in the mountains. He’s a man that rode the front at the Giro d’Italia and Vuelta a España last year, to help get his teammate Esteban Chaves to the podium in both of those Grand Tours.

Today, on the slopes of Falls Creek at the Jayco Herald Sun Tour, Howson got his own chance to shine.

Howson had attacked from a thinned-out peloton roughly halfway up the 30km stage-ending climb with Sky’s Kenny Elissonde for company. The duo caught the remnants of the day’s breakaway then led the race as the ski resort came into view. Until those final kilometres, Howson was still in domestique mode.

“All the way until 2km to go today [when] I put down my final attack, I always had my teammates in my mind,” Howson said. “We had so many cards to play — four climbers within a team of seven. Any of us could have won today and we all put it out there and it all fell in place for myself today.

“I was 100% confident in myself to win and once I said I was confident to win, the team put full faith in me as well. So I can’t thank the team enough for that.”

Howson’s attack with 2km to go left Elissonde behind and allowed the former U23 world time trial champion to solo to his first individual victory since turning pro in 2014.

“This is my first win in these colours and it’s been a long spell without a win,” Howson said. “I have been living my successes through others which I am always happy to do, but it’s nice to get a little bit of glory today.”

Behind Howson, Elissonde was caught and overtaken by young West Australian Jai Hindley (Korda Mentha-Australia) in the closing kilometres, the 20-year-old going on to finish strongly in second place. Elissonde managed to hold on for third, a further 15 seconds behind Hindley.

For Hindley, the feeling of riding away from some of the best climbers in the world – including Chris Froome (Sky) and Esteban Chaves (Orica-Scott) — was thrilling, if a little nerve-wracking.

“It was pretty scary,” he admitted. “Coming into that last K I didn’t know if I was going to catch up to Kenny or if Froome was just going to fly past me. So I was just head down and just give it everything really.

In the end the much-anticipated battle between Froome and Chaves never really eventuated. Both did attack on the final climb — Froome with about 17km to go and Chaves about 1.5km from the top — but with both riders having a teammate up the road, it wasn’t the head-to-head battle that most were predicting.

Chaves went on to finish fifth, 1:10 behind Howson, while Froome was sixth, a further second behind.

Earlier in the day an eight-rider break got clear in the opening 10km and established an advantage that peaked just beyond seven minutes. They were kept in check by an Orica-Scott-and-Sky-led peloton as the Tawonga Gap climb approached.

The lead group fractured over the 7km climb but regrouped on the descent that followed. The leaders began the final, 30km climb to Falls Creek with an advantage of two minutes, but that soon eroded as the pace increased in the peloton and the lead group started to splinter once more.

Steve Lampier (JLT-Condor) was the last breakaway rider to be caught, being joined by Howson and Elissonde with roughly 10km to go. Lampier was dropped 2km later as the two climbers continued towards the finish.

For Howson, today’s victory means he now has the opportunity to call on the support of those he’s supported so well in recent years. At least for now.

“Esteban, I know, would be the first person to put his hand up and help me for the rest of the tour if that’s the way it [pans out],” Howson said. “And I would be very grateful for that. But also … [Chaves and others are] still within striking distance themselves. So if a move goes in one of these tough stages coming up, the roles could be turned around very quickly.”

Howson will wear the yellow jersey into tomorrow’s tough second stage and is expecting a significant battle.

“Oh Team Sky — they’re obviously one of the world’s strongest teams so I can guarantee they’re going to throw everything they have,” Howson said. “It’s still a lot of tough stages to come. But I also have a very strong team behind me and also a lot of strong riders that are still in contention.

“So we’ll see how the next couple stages go.”

Tomorrow’s stage 2 takes the riders 165.6km from Mt. Beauty to Beechworth with a challenging 10km climb near the end. It is followed by the race’s only sprint stage, to the Mitchelton Winery, before a challenging circuit race around Kinglake to conclude the tour on Sunday. 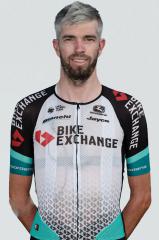