KINGLAKE, Australia (CT) – He’s made a name for himself as the ultimate domestique, as a team player who rides the front in the mountains to support his teammates. But this week at the Jayco Herald Sun Tour the tables were turned and Damien Howson (Orica-Scott) was able to call in some favours from those he’s ridden for in the past.

After winning stage 1 on the long uphill finish to Falls Creek, Howson took the yellow jersey and never let it go. That win on stage 1 was his first individual victory as a professional, and the overall victory he secured in Kinglake today was his first ever stage race title.

“I think each lap that went by I became more calm,” Howson said. “Every time we had a full team coming through the finish line and then still plenty of numbers to go through the final lap. I knew as long as I had Esteban with me on that final climb that it was going to be pretty simple to control and maintain the overall lead.

“That’s exactly what happened today and everyone just went further than they needed to and made my day as easy as possible, which was fantastic.”

The time for the general classification riders was taken with 3km to go in today’s stage after concerns about an oil spill in the closing kilometres of the circuit. But it wasn’t until he crossed the finish line proper that Howson allowed himself to celebrate. The South Australian threw his hands in the air and breathed a sigh of relief after a nervous few days spent leading the race.

“It comes with a lot of honour,” Howson said of his victory. “There’s a lot of prestigious names on that list [of past champions]. I was just looking at the trophy there on the presentation and I’m really happy to join that list of guys.

“To get my first win only a couple days ago and to continue all the way through and keep the yellow jersey on the final day — it’s my first overall win ever. So yeah it’s also nice to break into new territory myself.”

While Team Sky weren’t able to defend the title they took last year with Chris Froome, it was far from an unsuccessful week for the British squad. In all, Sky won three of the five stages of this year’s race — the prologue with Danny van Poppel, stage 2 with Luke Rowe, and today’s final stage with Ian Stannard.

Stannard had been part of a 17-rider breakaway that formed on the first of four 31.1km circuits around Kinglake and led the race by a maximum of just beyond four minutes. Stannard hadn’t necessarily meant to get in the move after his efforts in yesterday’s chaotic third stage.

“I knew the [Sky GC] guys wanted to spice it up behind and I wasn’t quite sure how I felt — I had a big day chasing that last 30km yesterday,” Stannard said after the race. “I went pretty deep and felt not great early on but I came around towards the end of the race and I knew they wanted to come up so I might as well try that as well and see if I can play the game a bit and hang on.”

The breakaway splintered and regrouped several times throughout the race, particularly in the closing lap. Stannard himself was dropped from the lead several times in the last 50km, but battled his way back to the front with 5.5km to go. With the peloton closing in behind, Stannard put in two attacks, the second of which saw him get clear of the break 1.4km from the line.

The Briton quickly opened a gap and covered the remaining distance back to Kinglake. He appeared to sit up too early, getting ready to celebrate, and was very nearly caught on the line. But in the end he managed to hold on as a group of his former breakaway companions were led in by Aaron Gate (Aqua Blue; second) and Taco van der Hoorn (Roompot; third).

Defending champion Chris Froome summed up his teammate’s performance after the finish.

“He’s an absolute beast. Absolute beast of a rider,” Froome said of Stannard. “Yeah I think that’s the thing about Ian, he’s so versatile. He’s 85 kilos or something but still wins up on top of a climb. Scary.”

For Froome, the race didn’t quite pan out as planned. He finished sixth on the pivotal Falls Creek stage and ended the week in the same position on GC. He attacked several times on today’s final stage, including a promising solo move inside the final 5km, but Howson and his Orica-Scott teammates were able to follow and defend the overall lead.

Froome paid tribute to his rival after today’s stage.

“Of course we were here trying to win as well,” Froome said. “It’s been really aggressive every day. We’ve just tried to have someone in the break or really try and take the race on and that’s exactly what we wanted from this race.

“Damien Howson — really strong. Rode a great stage on Falls Creek and has defended the jersey really well, so chapeau. They did a really good job this week.”

For overall winner Howson, he’ll now head to Europe to begin the next phase of his season. In doing so he’ll take up a more familiar position in the Orica-Scott hierarchy.

“It’s always nice to get a win [but] I’m happy to go back in a support role,” he said. “I’ve gained a new amount of experience from being a leader and that new perspective that [allows me to] take further knowledge into the races coming up when there is another leader.

“I can then learn from that and ride more intelligently myself.”

And while Howson will spend much of 2017 riding in support of others — as he has in the past — there might also be the odd chance to ride for himself throughout the year.

“We work closely with the staff here at Orica-Scott and yeah there’s opportunities for me throughout the year,” Howson said. “I’ve known that for a while now and it’s a matter of capitalising on those chances.

“We have such a strong team throughout the whole roster that there’s so many winners, so many dynamics of the team, and if I do get that opportunity … you’ve really got to take that chance.”

He certainly took his chance at the 2017 Jayco Herald Sun Tour and leaves the race a more-than-worthy overall winner. 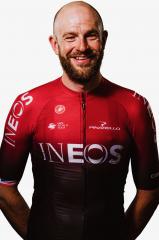