NAGAMBIE, Australia (CT) – At first blush, the finish of today’s sprinter-friendly stage of the Jayco Herald Sun Tour looked a little sketchy. Two tight right-handers, narrow roads and a narrow bridge all in the last 3km – crashes were always a possibility. Indeed, when race director John Trevorrow announced over race radio this morning that GC time would be taken 3km from the finish, he described the lead-in as “dangerous”.

With the day-long breakaway caught and the lead-out trains jostling for position ahead of the tight finale, a touch of wheels brought down a handful of riders just after 5km to go. And then, roughly 1.2km from finish, another crash saw more riders hit the deck.

A group of 16 made it through at the head of the race with Travis McCabe (UnitedHealthcare) dashing to a comfortable win ahead of Mitch Docker (Orica-Scott) and Leigh Howard (Aqua Blue).

“It was hairy; I mean it got really crazy those last few k’s,” said stage-winner McCabe. “You’re so close to everyone and everyone’s head butting and everyone’s fighting. But I think the heat and that little climb took a lot of energy out of the legs and I think guys weren’t really fully aware of what they were doing and caused the crash.

“It looked like it was just guys fighting for wheels. With the wind and the crosswind and tailwind going back and forth throughout the last 20k of the race it was pretty stressful and I think guys were just nervous. The first and only sprint stage of the [race], everyone takes risks that they don’t … you just take risks. It’s part of the sport.”

With 1km to go McCabe came into the Mitchelton Winery in third wheel, sitting behind Mitch Docker.

“Mitch [Docker] pretty much held it, attacked or punched out I guess like 200 meters to go and I just knew I had the legs,” McCabe said. “So I went as soon as he did and held it to the line with a fairly decent gap. So [I’m] really happy.”

Danny van Poppel (Sky) and Brenton Jones (JLT-Condor), two of the stage favourites, were among those to crash, with van Poppel losing plenty of skin. While McCabe was thrilled to win the stage, he would love to have done so against the best sprinters in the race.

“The crash was unfortunate,” the American said. “It came out to a sprint but a lot of guys weren’t really there for it because of that crash. I mean it would’ve been nice to actually see how my legs hold up against the true sprinters.”

Overall leader Damien Howson (Orica-Scott) was caught behind a crash in the closing kilometres and lost time on the leaders. But with race commissaires deciding to give all finishers the same time, Howson will be in yellow again for tomorrow’s final stage.

It was another stressful day for the winner of stage 1, 24 hours after a puncture forced him and his teammates to chase hard to protect his overall lead.

“Another nervous day,” Howson said with a wry grin. “The sprinters had their chance today and of course everyone was fighting and jostling for position in that final five kilometres. So it made for some dangerous, exciting racing but I’m happy to get through unscathed.”

Howson had been right there when the second crash happened.

“[I was] kind of in the middle and weaving my way out of it and, you know, just keeping it interesting like I do,” said the South Australian. “The road is only a certain width wide and when so many aggressive bike riders want to get to the front — push and shove, crashes are going to happen. So I was I was happy to come away without touching the ground.”

Earlier in the day Howson managed to get off the front of the bunch in an unlikely move that also included defending champion Chris Froome (Sky).

“The breakaway took a while to go today and at one stage there was a group of 20 that escaped and I found myself in that group with Chris Froome,” Howson said. “Obviously having the yellow jersey [the break] was never going to survive but it was better to cover a move like that with such a quality bike rider and someone who’s on GC than having to bring [it] back.”

While the Howson/Froome move was shortlived, a more promising break did come together after roughly 35km. Nine riders got clear and with the peloton happy with the composition of that group, the day’s breakaway was formed.

The riders of that breakaway worked well together throughout the 167km stage, but were ultimately caught inside the last 10km as the tricky final sprint loomed.

The 2017 Jayco Herald Sun Tour concludes tomorrow with a 121km stage that comprises four laps of a circuit starting and finishing in Kinglake. With a 4.5km climb for the riders to contend with each lap, it will be a challenging conclusion to the race. Damien Howson is hoping to get through another day unscathed and add his name to the honour roll of Australia’s oldest stage race.

“I’ve seen that honour roll and it’s an extensive list of quality bike riders,” Howson said. “I can’t jump ahead of myself — I still have an epic day tomorrow to conquer. After that hopefully champagne showers all around and I’ll be very happy to join that list.” 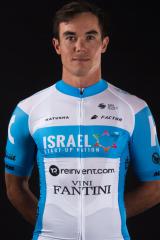