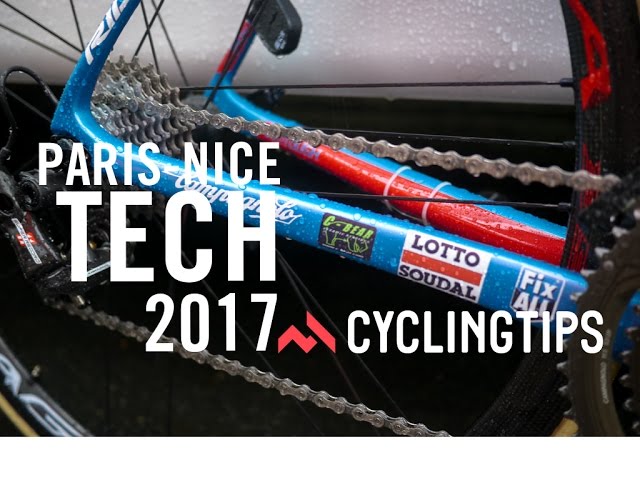 When the professional racing season kicks off in Australia in January, it’s not uncommon to see teams riding bikes from the year before, or decked out in kit that’s different to what they’ll use later in the season. Why? Sometimes it’s just not possible to get enough bikes and kit ready in time.

But come late February and early March, the season is in full swing and it’s then that we get to actually see full teams on the bikes they’ll use for the rest of the season. Being the first major European stage race of the year, Paris-Nice is often a good place to get sightings of the latest custom bikes, a full line-up of the newest tech and, for this year, a gauge of who’s decided to go down the disc brakes path.

We spent a few cold and wet days wandering the pits of Paris-Nice to bring you all the latest tech. Here’s what we found.

Dutch champion Dylan Groenewegen (LottoNL-Jumbo) had a custom Bianchi Oltre XR4 on display at Paris-Nice last week. The bright tri-colours and a flashy take on the Dutch lion motif kept Groenewegen’s Bianchi standing out from the rest of the team’s bikes. The detailing was second-to-none. The build didn’t deviate from the rest of the team’s setup, apart from a custom Pioneer power meter pod on the Dura-Ace spider.

Just like at last year’s Paris-Nice, Lotto-Soudal changed names and jersey design for Paris-Nice, substituting Soudal for Fix All, one of Soudal’s many products. To celebrate this fact, bike sponsor Ridley matched the team’s Helium SL bikes to the blue of the jersey.

The top tube featured the full race route from start to finish and the build featured a Campagnolo Super Record EPS groupset and Bora Ultra 35 wheels wrapped in 25mm-wide Vittoria Corsa tubulars – a change from last year’s Continental tyres. Finishing kit was from Deda, with most of the team using the Italian brand’s latest alloy bar and stem combo, the Superzero. The only main deviation from the Campagnolo groupset was the use of a C-Bear bottom bracket. The Belgian company specialises in a wide assortment of ceramic bearings.

At last year’s Tour de France we spotted a select few riders using Vision’s latest integrated bar and stem, the Metron 5D. Judging by the uptake from Vision-sponsored riders, it would seem that the new bar is very much a hit among the pro riders. Marcel Kittel (QuickStep Floors), most of the LottoNL-Jumbo squad, many of the Cofidis riders, and several of the Astana riders all had the bars installed.

A few riders on Team Sunweb, sponsored by Giant, had the company’s latest Contact SLR stem in use. The hugely oversized carbon design dwarfs the older version with its revamped boxier design — definitely something for the sprinters.

On occasion, a sponsor may not have a product that quite suits a rider’s taste or fit requirements. For a few of the FDJ riders, long-time component sponsor PRO was ousted in favour of a 140mm long FSA SL-K stem, all unbranded, bar a small FDJ logo on the clamp front where the usual FSA would be.

Over at Dimension Data, Omar Fraile was using the latest unreleased Cervelo, a bike we already caught a sneak peek of at the Dubai Tour back in February. From what we understand it’s likely to be the new R5 model.

The new frame, when compared to the current R5, is beefier in shape — all tubes seem to have been enlarged. The major stand-out seems to be the inclusion of the much more aero down tube. The seat clamp is now hidden away and sits tidily behind the post at the top of the seat stays. It is now a wedge design.

This bike appears on the UCI’s approved frames list as “R5 rim brake version”. This would suggest that there’s also a disc brake version in the pipeline, something we’ll need to keep an eye out for at the Spring Classics.

Factor officially launched the Factor Slick time trial bike during Paris-Nice, with its maiden voyage coming on stage 4. The Slick is a first from Factor — they’ve previously had a limited line-up of purely road-oriented bikes.

The Slick is aptly named after David Millar’s first comments when he saw the final product: “that looks slick”. According to Cooke, David Millar helped with the development of the bike, a project the company has been working on for two years.

Factor design director Iñigo Gisbert incorporated the brand’s distinctive Twin Vane Evo down tube from what is seen on the Vis Vires and ONE models. According to Factor, the split tube is more aerodynamic and stiffer than a typical singular-tube construction frame.

Factor has collaborated on the cockpit and aerobars of the new Slick with Mat Steinmetz, a bike fit specialist out of Boulder, Colorado and founder of 51 Speedshop. The bars offer three variations when it comes to the extensions. One aspect that both Cooke and Steinmetz wanted to highlight when speaking about the bike was its vast adjustability in fit.

Cooke also highlighted that the frames Ag2r-La Mondiale was using at Paris-Nice weren’t quite the finished product. Throughout the season, and in the build-up to the team’s ultimate aim — the Tour de France — the bike will be getting refined and becoming lighter.

Finally, there were a few other nuggets of tech that caught our eye. Tony Martin is now at Katusha-Alpecin and was one of only a handful of riders using a disc-equipped bike at Paris-Nice: the Canyon Aeroad CF SLX Disc. The Bahrain-Merida team had a full line up of team bikes with the latest SRM carbon cranks, a product that we got a glimpse of at the Tour Down Under.

With the weather being typically northern (in other words, extremely wet for the first three days), many riders raced with simple plastic Ass Savers mini-fenders attached to their saddles. These were promptly discarded once the event finally headed south and started living up to its moniker, “The Race to the Sun”