“For me it’s a dream that came true. It’s not that far from my home and I did a lot of recons to do this race,” Lampaert said. “To win, for me it’s a fantastic gift that I can give to the team and thanks to everybody.”

A WorldTour race for the first time in 2017, the 203km Dwars Door Vlaanderen — “Across Flanders” — uses many of the same cobbled climbs used at the Ronde van Vlaanderen 10 days later, including the Taaienberg, Oude Kwaremont, and Paterberg, in succession.

And while it’s a good precursor or things to come, many of the biggest favorites for the Tour of Flanders, such as Greg van Avermaet (BMC Racing), Tom Boonen (Quick-Step Floors), and defending champion Peter Sagan (Bora-Hansgrohe) did not take the start in Roeselare, where a moment of silence was held to observe the one-year anniversary of the terror attack in Brussels.

That group opened up a gap of almost six minutes after the first 50km.

It was on the Berendries climb, with 76km remaiming, that Gilbert attacked, splitting the peloton, and bringing with him several riders that would ultimately catch the day’s six-man breakaway.

Missing the move — and therefore chasing — was Cannondale-Drapac, riding for Sep Vanmarcke, Trek-Segafredo, riding for Edward Theuns, and FDJ, riding for Arnaud Demare.

The race had a scary moment when American Kiel Reijnen (Trek-Segafredo) rode off the road, into the grass, and then into a ditch surrounded by barbed wire. The ditch was deep enough that Reijnen couldn’t be spotted by cameras, however the reaction of race medics, calling for ambulance, was alarming. Ultimately, however, his Trek team announced that he was not seriously harmed.

The gap from the 21-rider move to the peloton grew to 45 seconds as the leaders approached the Oude Kwaremont, 35km from the finish. The front group began to disintegrate, but it was on the Paterberg where Gilbert attacked again, with only Lmapaert, Lutensko, and Durbridge able to follow.

Behind, Quick-Step’s Niki Terpstra and Zdenek Stybar jumped from the peloton in attempt to bridge across, making it to a group of nine riders from the 21-man move. On the Vossenhol climb, a group of 15 caught the group of 11, making a 26-rider chase group between the four leaders and the peloton. With a 45-second gap and little cohesion in the chase group, the four leaders extended their advantage.

“We were always on the front today,” Gilbert said. “After the selection I made on Berendries, some guys in the group started to sit in, so we decided to go again, this time on Eikenberg. On Paterberg, we were first and second at the bottom of the climb and went full gas. Behind, Styby and Niki did a great job and helped us stretch out our advantage to one minute.”

With two of the four at the head of the race, it was Quick-Step’s race to lose. Gilbert attacked on the final climb, the Nokereberg, and as Durbridge chased that down, Lampaert sat on Lutsenko. Once back together with 7km to go, Gilbert looked to Lampaert, who immediately counterattacked on the cobbled Herlegemstraat with what would prove to be the winning move.

“It was a hard race, but I am quite happy with the result,” Lutsenko said. “In the end, I preferred to wait for the sprint, because I was confident in myself. But Gilbert started his move a bit earlier and I did not catch his wheel. Anyway, I took third place, and this is a nice performance for me. With two riders of Quick Step in our group, it was hard to get more.”

It was the first WorldTour victory for the 25-year-old Lampaert, who also won the overall at the 2015 Driedaagse van West-Vlaanderen, and also finished seventh, in the front group, at Paris-Roubaix that year.

“We had the strength in numbers and this played in our advantage,” Lampaert said. “When I attacked, I wasn’t sure I will open a gap, despite feeling strong, but I noticed they couldn’t bridge across and that gave me confidence. The final kilometers of the race were like a short and tough time trial, but I gave everything. To win Dwars door Vlaanderen is a dream come true, especially as I did this together with such a fantastic team and in front of so many supporters.” 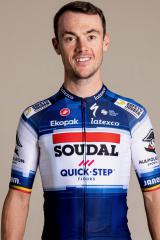