Coryn Rivera (Sunweb) today made history when she became the first American to ever win the Tour of Flanders. The 14th edition of the women’s event (101th for men) came down to a nail-biter of a finale when a four-person breakaway was caught in the final kilometre of the race, and a mass sprint of around 20 women followed.

At the line, American Coryn Rivera outsprinted Australian Gracie Elvin (Orica-Scott) and Dutch favourite Chantal Blaak (Boels-Dolmans), taking her second Women’s WorldTour win and an historic one at that.

The magnitude of her win hit just seconds after the line as she fell to the ground in exhaustion and burst out in tears of joy before hugging her hard-working teammate, Ellen van Dijk.

“Unbelievable. I can’t begin to explain yet … It feels like I’m in a dream,” Rivera said. “The team gave everything on the Kwaremont to get the group back at the wheel and we almost closed it, but in the end we couldn’t follow the four best climbers. From the moment that Hans [Timmermans] made the call to go full gas for me, Ellen took charge of the pace. The sprint was absolutely thrilling, but I still feel like I am dreaming.” 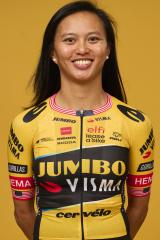 The sun shone warmly as riders and fans gathered on market square in Oudenaarde in front of the iconic Saint Walburga church. As riders appeared on stage one by one for the presentation, beer started flowing and the air filled with the familiar smells of fries and baked goods.

Lined up at the start, the riders mingled casually. Some kept to themselves, others good-naturedly posed for photos.

Now in its 101th year, “De Ronde” is among the hardest one-day races on the calendar and being the first to conquer the infamous cobbled climbs comes with a lot of prestige.

As the red flag came down to signal the start, the peloton rolled out to complete the 153-kilometre course with 12 climbs and five additional cobbled sections before returning to market square.

Attacks came early and often, and while a few early breaks managed to get some airtime, Tour of Flanders is truly a race of attrition with riders falling off the back one by one.

The longest early break was that of solo rider Rozanne Slik (Sunweb) who spent around 20 minutes in the wind, allowing her packed team of race favourites to sit in. Slik was caught on the Kanarieberg as Kasie Niewiadoma (WM3 Pro Cycling) attacked, and while Niewiedoma would get caught, the damage had been done. The lead pack had dwindled down to around 30 riders, and a winner would come from this group.

The break of the day

The pace was high as the pack headed to the next climb, and on that climb, the Kruisberg, the promising break formed. Four favourites – Kasia Niewiadoma (WM3 Pro Cycling), Elisa Longo Borghini (Wiggle-High5), Anna van der Breggen (Boels-Dolmans) and Annemiek van Vleuten (Orica-Scott) – successfully took off.

The quartet quickly got a significant gap with only two climbs remaining. While Van der Breggen and Borghini proved strongest on the climbs, the four came back together for the long, flat run-in to the finish. The breakaway had 30 seconds while Sunweb’s Ellen van Dijk and Canyon-SRAM’s Pauline Ferrand-Prevot led the chase.

As the remaining kilometres trickled down, so did the breakaway’s advantage. Keen to make it stick, Niewiadoma, Borghini and Van Vleuten worked hard. But interestingly, Van der Breggen sat in, saving her matches for later – a tactic that had worked so well in the Olympic road race in Rio.

But with time trial specialist Van Dijk chasing hard to ensure her team could contest the finish, the breakaway’s advantage ran out in the final kilometre of race. In the finishing chute, the quartet was swallowed up and a swarm of 19 riders barrelled toward the line.

Van Dijk’s efforts paid off with Rivera taking the win. As Rivera made history by becoming the first American to win Tour of Flanders, Gracie Elvin’s podium was a historic first as well, as she became the first Australian female to podium at this prestigious race.

“The win would have been amazing, but I was so close today,” said Elvin at the finish. “My best place in previous editions was not even in the front group, so to come here and be in the mix and try to go for the win is amazing.”

“It just goes to show all the hard work I’ve put in this season is paying off and how great the team was today. I really didn’t have to do much before the finish, everyone had a role to play and they did it brilliantly, especially Annemiek right at the end. This is definitely a career highlight for me, I’ve been dreaming about this for a long time and after coming so close again and again I want to keep improving.”

But while Sunweb and Orica-Scott celebrated, emotions ran high with the other breakaway riders.

“My race was very good. But it looks like the European champion wanted to ride for losing,” commented a bitter Borghini.

Niewiadoma was visibly upset as well.

“The cooperation went really good with Elisa and Annemiek, but Anna … I really have no idea why she didn’t want to ride with us, especially when she also attacked to make the group smaller. She created the breakaway and then didn’t work,” Niewiadoma said. “So I really don’t get it. And it’s really disappointing, because if we were working with four, then for sure I think we could make it to the finish. And it’s super disappointing for me that just with one kilometer to go we were caught. Just shit.”