“No one is more surprised than I am to be sitting here in the leader’s jersey right now.” — George Bennett (LottoNL-Jumbo), May 19, 2017

BIG BEAR LAKE, CA — The sixth stage of the Amgen Tour of California had two winners and several losers Friday after a 24km time trial in Big Bear Lake — but no one was more surprised, or a bigger winner, than George Bennett.

Racing at 6,752 feet (2,058m) above sea level, the 27-year-old from New Zealand pulled out the ride of his life to take the leader’s jersey with one, mostly downhill, stage remaining. With the 35-second lead he has over former leader Rafal Majka (Bora-Hansgrohe), the LottoNL-Jumbo rider is almost certain to take the second GC victory of his six-year career, and the first since the 2011 Tour Of Wellington, in New Zealand.

Bennett didn’t win the time trial — that honor goes to 23-year-old neo-pro Jonathan Dibben of Team Sky, who scorched the flat, technical 24km course in a time of 28:27. But the Kiwi rider took 41 seconds out of Majka, and kept within 11 seconds of Brent Bookwalter (BMC Racing), and two seconds of Andrew Talansky (Cannondale-Drapac), to leapfrog to the top of the general classification.

“I woke up and I didn’t feel that good after the hard effort yesterday,” Bennett said. “I was frustrated with myself yesterday, I put a lot of expectation on myself to race for the stage win, and I didn’t bring it off. At this altitude, you can’t ride above your limit, so I kept it very controlled. I didn’t hear much over radio for the first half, then the director started getting very excited in my ear. With a few kilometres to go I really stepped into it. When I crossed the line I knew I’d had a good ride, I saw that I had finished third or fourth.

“While I was waiting for the clock to tick down [during Majka’s ride], I had pretty nervous feeling, but also one of disbelief. A lot of work has gone into that result. This didn’t happen overnight. I’ve trained hard, and worked closely with my coach, and the team put me through the ringer, forcing me to focus on my position.”

The day’s biggest loser was Majka, who finished 22nd on the stage, 59 seconds behind Dibben, and dropped to second overall.

“I’m not so happy, because I started too slowly,” Majka said. “In the end I had lots of power, but by the time I realised this, it was too late to make a difference. I wasn’t sure how to start today, but in the end the altitude didn’t make a difference and it felt like any other time trial, so I think it would have been possible to have taken a top result today.”

Talansky, who won on Mt. Baldy 24 hours earlier, put in an average, but not excellent, performance. He finished third, moving up from fourth overall to third, supplanting Ian Boswell (Team Sky), who dropped to fourth on GC.

Another loser on the day was Aussie Lachlan Morton (Dimension Data), who had two bike changes and finished 1:55 of the winning pace, dropping from fifth overall to ninth.

Talansky and Bookwalter were the two GC favorites to miss the move on Mt. Hamilton on Stage 2 into San Jose, surrendering 37 seconds to Bennett and Majka, and 30 seconds to Boswell and Morton.

“I gave it everything today,” Bookwalter said. “Unfortunately, I just missed out on the stage win, but again, I am proud of my effort. I executed what I had trained for which was to improve my time trial skills on a flatter course, and I showed that of the GC guys I was the best today. For me, that was a bit of a milestone and a breakthrough ride in terms of racing against the other GC contenders on a course like today. It stings a little bit to miss out on the win, but there are lots of positives to take away from it, and I think I proved that I am one of the strongest riders here.”

Like Bennett, Dibben was shocked by his ride against the clock. It was his first win as professional, though it’s far from a first major victory for Dibben, who won the rainbow jersey in the points race at the 2016 world track championships.

“George [Bennett] said it was a disbelief for him, and I can say it’s certainly a bigger shock for me,” Dibben said. “At altitude you can’t afford to go into the red too much, so I got out there and let the pain come to me, and after a few kilometers I was already swinging and I just kept digging in. It wasn’t really a target today as it’s my first time trial of the year, so I figured I’d go full gas and see how it goes, and it couldn’t have gone any better.”

One stage remains at this Amgen Tour of California, a mostly downhill 125km from Mountain High Ski Area to Pasadena. Three categorized climbs will stand between the peloton and the finish of the 2017 Amgen Tour, which finishes in downtown Pasadena rather than the Rose Bowl parking lot as it has in years past.

On paper, it looks to be a stage for the sprint teams, of which this WorldTour field has several: Quick-Step Floors, for Marcel Kittel; Bora-Hansgrohe, for Peter Sagan; Team Sky, for Elia Viviani; Trek-Segafredo, for John Degenkolb; and Katusha-Alpecin, for Alexander Kristoff.

“We’ll have to take it like any other day,” Bennett said. “Tonight will be all about full focus, and recovery. Tomorrow we will have to very careful with who we let away. If it goes on climb, okay. If it’s on the flat, and it’s all chaotic, we’ll have to make some alliances with the sprinters, and make it a family affair.” 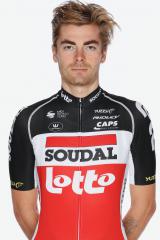