Dutch rider Tom Dumoulin of Team Sunweb is the winner of the 100th Giro d’Italia, a dramatic finale to the Italian Grand Tour that saw the top four riders on the general classification begin the day separated by just 53 seconds.

Dumoulin used his strength against the clock to leapfrog three riders in the overall standings on a flat 29.3km course from Monza to Milan that finished in front of the city’s famous cathedral.

Colombian Nairo Quintana (Movistar) started the day in the maglia rosa of race leader, but could not defend, losing 1:39 to Dumoulin and dropping to second overall. Two-time Giro winner Vincenzo Nibali (Bahrain-Merida) rounded out the GC podium.

“It’s great. It’s really crazy. I cannot describe it with words,” Dumoulin said. “It’s incredible. It was such a nerve-wracking day. I needed to stay calm, but I almost couldn’t. But I did it. I had good legs, and I just went for it.”

It was a double Dutch victory, as Jos Van Emden (LottoNL-Jumbo) won the stage with a time of 33:08, 15 seconds faster than Dumoulin. It was arguably the biggest career result for the 32-year-old Van Emden, who could be seen crying with joy when he realized he’d won the stage.

“I’m so happy, so emotional,” Van Emden said. “I’ve lost so many times, I’ve so many times finished second. What a great day for Dutch cycling. Yesterday I sent a message to Tom Dumoulin [about] the Maglia Rosa and he replied he hoped we’d both be celebrating today — and we are.”

Heading into the time trial, the top six riders on the general classification were separated by just 90 seconds, with the top four riders separated by just 53 seconds. Quintana led Nibali by 39 seconds, with Pinot four seconds behind Nibali, and Dumoulin 10 seconds behind Pinot. Zakarin sat fifth overall, 1:15 behind Quintana, 36 behind Nibali, 32 behind Pinot, and 22 behind Dumoulin.

Though Quintana began the Stage 21 time trial with a 53-second advantage over Dumoulin, the Dutchman — a silver medalist in the Olympic time trial event last summer — was widely viewed as the favorite for the overall after taking 2:53 from the Colombian in the 40km Stage 10 time trial.

“I spoke to my DS about getting time splits and he said ‘Only if we are sure, I’ll tell you not to take risks in corner,'” Dumoulin said. “And he did it halfway already, and I thought that seemed early. Then I crossed the line, and they were saying, ‘You won, you won.’ But then I saw on TV it was only three seconds and I was angry. But I’ve pulled it off, and it’s incredible.”

An unconventional and unexpected nature break on Stage 16 to Bormio saw Dumoulin lose much of the substantial GC advantage he’d gained in the Stage 10 time trial, but he held onto his maglia rosa for three more days before ceding it to Quintana on Stage 19 at Piancavallo.

“A podium finish is not something to be disappointed about,” Quintana said. “We’re not machines, we can’t do everything we want as we want before a race. Sometimes, you don’t get the prize you want, even when you work hard to accomplish your goals. On the contrary, we’re happy. We are satisfied about this result. The best thing in this Giro was the great teamwork. I have no words to describe how grateful I am towards the whole Movistar team. We could have done it better, maybe worse, but we’re on the podium and that’s what counts right now. Dumoulin didn’t look like the main rival for us before the race, yet he bested everyone with excellent time trial and mountain performances. He really deserves this victory.”

Dumoulin’s win marks a third time in the last decade the winner of the Giro d’Italia has been decided, or confirmed, in a final-stage individual time trial.

In 2012, Canadian Ryder Hesjedal overcame a 31-second deficit to Spaniard Joaquim Rodriguez in a 28.2km TT in Milan to win the overall by 16 seconds. In 2009, in Rome, Russian Denis Menchov led Italy’s Danilo Di Luca by just 20 seconds heading into the final 15.5km race against the clock; Menchov cinched the overall by 41 seconds, even after a crash and bike swap in the final kilometers.

“When I crossed the finish line, everyone congratulated me. I was celebrating my victory but in the tent, I saw there were only three seconds difference between Nairo Quintana and myself,” Dumoulin said. “I became angry with everyone who congratulated me. I was super nervous. I’ve had the most nervous moments of my whole life. You’re never sure of winning, you always doubt. I think everybody does. I wasn’t really nervous at breakfast. I was happy with my night before this time trial considering the stress. The recce was good, I had a mattress to relax on at the back of the bus. At lunch I was nervous, my metabolism was really high in the bus. But I could always stay focused. I’ve done a lot of TTs under pressure before. That experience paid a lot today.” 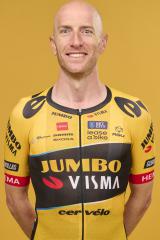 Nightmare for Team Sky at Giro d’italia as Thomas, Landa down in crash caused by police moto