Orica-Scott's Sarah Roy spent most of stage four in a break before she outsprinted her breakaway companions for the win.

Orica-Scott's Sarah Roy spent most of stage four in a break before she outsprinted her breakaway companions for the win.

It was another wet, windy and hard day at the OVO Energy Women’s Tour of Britain as the peloton tackled the 125 hilly kilometres through Peak District National Park that made up stage four.

For the second day in a row, it was an Australian to take the stage win. After Chloe Hosking’s sprint victory in stage 3, it was Orica-Scott’s Sarah Roy who bested the all-star peloton, securing the team’s first UCI Women’s WorldTour win of 2017.

“It feels so good to get our first WorldTour victory, the whole team has been working really hard and we have come very close so many times this season and it’s a big relief to get off the mark. The girls have been wonderful and I’m really happy,” commented Roy.

Boels-Dolman’s Christine Majerus came in second with Sunweb’s Leah Kirchmann close behind her.

Along with Marta Bastianelli (Ale Cipollini), these riders made up a four-person break that spent the second half of the race off the front. While close, the chasing pack – with race leader Kasia Niewiadoma doing a fair share of the work – was unsuccessful in reeling them in.

As the kilometres trickled down, Majerus attacked her breakaway companions several times until only Roy was able to hang with the Luxembourgian. In the cat-and-mouse game before the finish, Roy held back until the 200m sign approached. She threw a blistering attack, and crossed the finish line solo.

“I’m really excited, elated and thrilled to take the victory, especially given the efforts that the team have put in for the past few stages,” said Roy. “I felt pretty good coming into the finish. I didn’t want to be the one attacking but I was really confident following the wheels. I’m actually really surprised – it was very hilly and I’m not a climber. It was a hard race.”

Roy did have an unfortunate crash after the finish, however. After posting up in a victory salute, her front tyre caught an edge and Roy tumbled to the ground. She appears to be OK, but went in for a medical check after the podium ceremonies to be sure.

Due to the leading quartet’s time gap and sprint bonuses, we saw a good shake-up in the GC.

While Kasia Niewiadoma retains her leader’s jersey, Majerus and Kirchmann now sit in second and third respectively. Ellen van Dijk (Sunweb) and Hannah Barnes (Canyon-SRAM) round out the top-five.

“[Today was]one of the hardest races I’ve done in my life,” said Niewiadoma after the race. The Polish champ has led the tour since day one, and while her lead has decreased to 1’25”, she has a pretty strong hold on the green leader’s jersey going into the finale.

“I knew [the four-rider break] was a really dangerous move and I knew we had to start riding to bring her back. I tried to stay calm and relaxed and only think positively. Of course, it’s impossible to control every attack but I tried as much as I could. I’m super happy that the OVO Energy Green Jersey is still with me. It was really cool that Cervélo Bigla and Canyon//SRAM helped us chase the breakaway down; I knew Canyon would want to keep Hannah Barnes in third on GC, so it was really cool that they were eager to ride.” 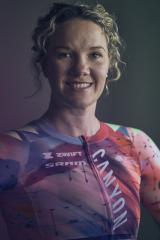 Going into this penultimate stage, Hannah was prepared for a hard day. She expected a small selection would reach the finish first, and she was determined to be part of it. Today’s GC shake-up, however,  was a bit of a surprise.

“There was a lot of up today,” said Hannah. “It started right away with the neutral being all up. The race split apart on the first climbs and then again for the QOMs, and the descents were really technical and narrow.

“I actually felt really good on the climbs. Normally, when they’re short and sharp like that, I’m not the best, but I was able to stay in the front group, which was good.”

Hannah didn’t make the four-rider break but was well-positioned in the lead group behind them.

“I think everyone knew today would shake up the GC but not the way it did. We were close in catching them, I believe it was only 17 seconds in the end. So tomorrow is going to be another interesting and hard day.”

‘Hard’ seems to be the summary word of the tour, as stages are long –142km on average– and challenging, and the weather a bit foul.

“Yeah it’s definitely been the hardest [OVO Energy Women’s] tour thus far,” said Hannah. “I think the length of the stages caught all of us out. You could tell in the race today that there were a lot of tired legs. It’ll be interesting tomorrow just to see how everyone does as it’s a short stage but it’s going to be really fast.”

Are the stages too long?

“No, I don’t think we need shorter stages, but sometimes long stages create negative racing, But the racing [here] has been really, really hard despite the length, so it’s been really good,” said Hannah. “I like the mix and variety we have on the calendar.”

Last day in the red-white-and-blue

With just one stage left, the pink Best British Rider jersey swapped hands between the sisters yet again. Crossing the line in fifth today, Hannah will be in pink for the finale in the heart of London.

“It’s all become a bit of a joke really –the battle between my sister and me,” said Hannah. “It’s funny. But it’s a really nice jersey to be in.”

Hannah hopes to keep it during the circuit race tomorrow, and maybe pick up another one as well.

“Tomorrow, even though it’s a short circuit in London, the seconds in the intermediate sprints will be important. I don’t think anyone is going to make up the 1’25” to Kasia but you never know who wants to get second or third in the GC. I think it’s going to be a really aggressive race and there will be a lot of sprinters that will want to have a go.”

“Yeah I’d like to think so! I have got to race really hard tomorrow. I think I’m second in the sprint category, too, so it will be fun to try something there.”

Despite the rain, every town the race travelled through these past few days saw big crowds, and “Go Hannah!” cheers were heard everywhere. But in London, Hannah will have her biggest cheering squad yet.

“The crowds have been great, especially on the climbs. Eventhough the weather hasn’t been great, there’s been a lot of people out. It’s quite nice to have my name cheered,” Hannah said.

Tomorrow, however, it’ll be more personal. Her parents, her 89-year-old grandmother and loads of friends will be there cheering for her.

“I’ll have so many people there tomorrow. I’m going to have to put on a show,” said Hannah.

With the British national championships approaching, tomorrow will also mark her last race day as the reigning national British road champion, though she’ll be in pink instead of the red-white-and-blue stripes.

“It would have been nice to finish the tour in the [national champion] jersey, but that’s OK, I get to train for two more weeks in it,” she said.

The OVO Energy Women’s Tour concludes in central London on Sunday 11 June, with a 10-lap circuit race starting and finishing on Regent Street St James. The 62-kilometre leg gets underway at 15:30