It is difficult to write an article about a race in which everything falls to pieces. There isn’t much to express other than the clichés of disappointment and half-hearted optimism for the next opportunity. That is how I felt after the Amgen Tour of California in May, and why I decided not to write about my experience there.

The short version is that some poor bike handling and inattention on my part ended up sending me to the tarmac early on Stage 2. It was a embarrassing day that cost me lots of skin and knocked enough off my form that just finishing five days later in Pasadena was an accomplishment. I flew home exhausted, feeling as if the energy had been wrung out of me like soapy water from a dishrag.

I didn’t expect to bounce back like I did, but less than a week following Amgen I was firing on all cylinders. Suffering through a hard race can be a coin flip in terms of making or breaking your form, and in this case I was fortunate to land heads up. With my legs back under me, I put in two solid weeks of steep climbing, time-trial work and a sprinkling of high-end efforts. Then it was onto the redeye flight for Québec City to join my teammates for one of the hardest races on the North American calendar — the Tour de Beauce.

The Stage 1 circuit that has become a mainstay of Tour de Beauce in the last few editions serves as a perfect microcosm for the race itself. The course is packed with a variety of climbs, rough and twisting roads, and enough exposed sections to make crosswinds a constant anxiety. I wasn’t surprised to find myself virtually gnawing on my own stem, clinging desperately to the wheel in front of me over 50 kilometers into the race. The field was splintering, no breakaway had formed, and there were still seven grueling laps and nearly four hours of racing ahead.

Mercifully, we rounded a corner, the wind lost its viscous impact, and the peloton softened with a sudden slowing. This brief hesitation would be the inflection point for the stage and for the entire tour. I saw Canadian legend Bruno Langlois (Garneau-Québecor) attack over the top of the short KOM climb and forced myself to follow with five other riders. The battered peloton hesitated and we opened our gap. We rolled through at an assertive but not suicidal pace and were soon joined by a more than a dozen other riders including my Jelly Belly-Maxxis teammate Keegan Swirbul.

There was awkward cooperation until the time gaps starting coming through: “five minutes”… then soon after, “nine minutes” and finally, “ 14 minutes.” It was done. The field would not chase and the breakaway would decide the stage and the general classification for the week. Keegan sprinted to 10th on the stage, and when the dust settled we had gained a massive 26-minute advantage on the peloton. There were perhaps a half a dozen GC contenders left in contention and we had two among them.

Beauce’s second stage is its most iconic — a 170km grind to an eventual mountaintop finish atop Mount Megantic. The team rode perfectly to shepherd me and Keegan, two inexperienced GC riders, to the base of the climb and give us the chance to fight for yellow. After a flurry of accelerations, we were ahead with only one rider other from the previous day’s breakaway, Aevelo’s Jack Burke. I set a strong pace all the way into the final 300 meters where Keegan attacked Burke to take the overall lead. I scrambled across the line just behind to slot into third on GC as I saw my good friend Matteo Dal Cin (Rally Cycling) celebrate the stage win from the breakaway. It was a great result for the team, but in Beauce there is always another battle to fight.

I rode a slightly disappointing time trial on Stage 3 as Silber’s Alec Cowan stormed from a minute back to take yellow. I was now just nine seconds back with Keegan close behind in fourth overall. This made the next two relatively flat stages a stressful grind as we fought to avoid time gaps and mishaps. With some minor difficulties the team collectively held my hand and guided me into the final stage still in second overall, within striking distance of yellow.

Beauce’s final stage is a classic and often deciding element in the 32 year-old race. The 10.2 km circuit snakes through the suburbs of small town St. George, demanding a constant variation of accelerations, climbs, corners and rough descents. The race detonated immediately and I worked my way into a group of 20 riders, including three teammates, and I soon felt the weight of virtual yellow on my back. Silber had disappeared and we would get no help over the next two hours of the race. It was foreign territory for me and I knew it would be anything but a procession to the finish line.

The attacks started flying with 40km remaining with a mix of GC threats and stage-hunting strong men striking out from out battered group. Despite great legs, I struggled to calculate my reactions and eventually a group containing Andzs Flaksis of Holowesko-Citadel stole a gap. Flaksis was 2:30 behind in GC but with only Keegan and I remaining, and zero cooperation from other riders, the gap went out. Amid the confusion, team director Matty Rice pulled up beside me with one lap to go and gave the simple instruction: “Time trial it!”

I was alone pulling for yellow, pouring everything into the pedals with half a dozen passengers in the draft, watching me suffer. It wasn’t enough. Over the final climb I was inevitably attacked and watched second place float away. I crushed myself all the way to the line to preserve a podium place, immediately seeing jubilant Holowesko riders all around.

The next hour was a blur of emotion. It was my best result by far, a podium in a UCI stage race. It was also the first time I had a whole team behind me, and I had let the win slip away. I had given it all but I had made crucial errors. My mom and fiancé were on hand to watch me, beaming with pride and excitement. It was also Father’s Day and I saw an empty spot along the fencing where my stepdad would have been if lung cancer hadn’t taken him two months earlier. I fought back several different kinds of tears as I saluted on the podium and gave a final interview.

It was my pinnacle so far, but hopefully just the start of better things ahead. I am ready to enjoy this, but I am ready for more. I can’t wait for the next chance. 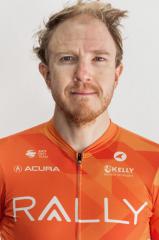