Warbasse, 26, out-sprinted two breakaway companions to claim the stars and stripes jersey on a punchy and technical course.

Warbasse — who is in hirst first season with Aqua Blue Sport after spending 2013-14 with BMC Racing and 2015-16 with IAM Cycling —  covered fellow Michigan-native Alexey Vermeulen (Lotto NL-Jumbo) as he initiated the winning move up the Sherrod Road climb on the penultimate lap.

Neilson Powless (Axeon Hagens Berman) joined the trio over the summit. The breakaway’s gap solidified and steadily grew to almost a minute over the remaining lap and a half.

“I rode the course earlier in the week, and I knew that last riser (in the final kilometer) was where the race would be decided if it was a small group,” Warbasse said. “I know I don’t have the greatest sprint and so I had to hit them (Powless and Vermeulen). I knew if I got enough of a gap on that downhill (at the finish) I might be able to hold them off.  Yeah, I just put my head down and didn’t look behind and I was able to do it.”

It was a stellar ride from Powless. The 20-year-old from the Sacramento area took the silver medal just 24 hours after finishing third in the national time-trial championship.

“We were all looking at each other at 400 meters to go,” Powless said. “At that point, we were trying to figure out when to go. The first person to go had the big or best advantage in a downhill finish. I thought Alexey would jump on (Larry’s) wheel, but he hesitated and that’s all Larry needed, and he took it to the line.”

Robin Carpenter (Holowesko-Citadel) won the three-man sprint for fourth, 35 seconds behind Vermeulen but ahead of Colin Joyce (Rally Cycling) and Brent Bookwalter (BMC Racing). Alex Howes (Cannondale-Drapac) finished seventh, three seconds behind Bookwalter, while Kiel Reijnen (Trek-Segafredo) led the peloton across the line another 11 seconds back.

One hundred and eight men lined up in downtown Knoxville and rolled off under overcast skies. The clouds quickly cleared and were replaced by temperatures in the mid-90s, adding an element of attrition to the already hyper-aggressive national championships.

The race was animated from the beginning, but no substantial move was able to gain an advantage until Sean Bennett (Jelly Belly-Maxxis) rolled off on Lap 4, an hour into the 109-mile race. Joining him was Daniel Eaton (UnitedHealthcare) and Ian Garrison (Axeon Hagens Berman). Their advantage grew to two minutes by lap seven, but team Holowesko-Citadel, riding for leaders T.J. Eisenhart and Robin Carpenter, kept the trio on a short leash.

Rally Cycling aided in the chase effort on Lap 10, and the breakaway was caught shortly thereafter. With an hour remaining, the race was re-set. Rally was immediately aggressive with several attacks, but it wasn’t until two laps later, up the steep Sherrod Road climb, that the winning breakaway finally detached from the field.

“I’m in disbelief,” Warbasse said. “I think this has been the best two weeks of my life. I had a really great race at the Tour de Suisse a couple weeks ago, but yesterday I felt pretty bad in the time trial, and was a bit disappointed. I told some friends, ‘I guess I work well with disappointment, so hopefully tomorrow will be good.’ Honestly I didn’t feel good the whole day, at the start I was suffering.. actually I was suffering the whole time. I don’t think I was the strongest today, but I think I was the smartest.. I can’t believe it. I’m so happy.” 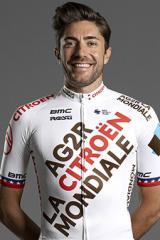