With the level playing field that the women’s peloton is becoming more and more, there’s not one top favourite taking to the start and it will be an interesting fight between teams and riders, all the way to Torre del Greco on Sunday July 9.

Stage three finished in a bunch sprint, won by Hannah Barnes (Canyon-SRAM), who beat all the sprinters on the line in San Vendemiano. Read about the 100 kilometres that preceded the sprint for victory in day three of the Giro Rosa.

One less rider taking to the start this morning in San Fior, as Ashleigh Moolman-Pasio (Cervélo-Bigla) abandoned the race due to illness. Via Twitter, she told cycling fans that her “head was ready to race, but my body unfortunately not”.

With 167 riders making up the peloton, the race started in San Fior, 100 kilometres ahead of them to get to San Vendemiano. Along the way, they would come across one intermediate sprint and one categorized climb, the category-two Ca’ del Poggio.

The first part of the stage was characterised by a lot of mechanicals, fortunately none that influenced the race.

Team VéloConcept again wanted to be in on the action, Camille Pedersen attacking multiple times. The peloton didn’t let her get away at first, but her second attempt was more successful. She was joined briefly by Kseniia Dobrynina (Servetto-Giusta), but they didn’t get to enjoy their advantage very long, the peloton closing in on them after 25 kilometres.

As bonus seconds are part of the intermediate sprints, Boels-Dolmans made a target of keeping those from Annemiek van Vleuten (Orica-Scott), who stands second in the GC, at eighteen seconds from pink jersey wearer Anna van der Breggen (Boels-Dolmans). The sprint was won by Nikki Brammeier (Boels-Dolmans), ahead of her teammate Chantal Blaak in the new red-white-and-blue national championship kit. Lotta Lepistö (Cervélo-Bigla) took third place.

Straight after there was an attack by Ana Sanchez Sanabria (Servetto-Giusta), but she didn’t stand a chance with the QOM climb following shortly after. Orica-Scott set up their team leader perfectly to take the maximum points atop the Ca’ del Poggio, Van Vleuten strengthening her lead in the QOM classification.

But it didn’t result in the GC contenders taking it all the way to the line, like it did yesterday. Shortly after the leaders finished the descent, they were caught by the peloton.

With the ‘gruppo compatto’, Elena Cecchini (Canyon-SRAM) attacked with great effort, immediately getting herself quite a gap. She managed to stay out of the hands of the peloton for ten kilometres, but was caught with twenty kilometres to go.

Although a few attempts at preventing a bunch sprint were made in the finale, the sprint teams kept everything under control. A complete bunch entered San Vendemiano, preparing for a bunch sprint.

Canyon-SRAM might not have been in luck with Cecchini’s attack, but Hannah Barnes made up for it completely by winning the bunch sprint, beating all the pre-race sprint favourites, like Kirsten Wild (Cylance Pro Cycling), Chloe Hosking (Alé Cipollini) and Coryn Rivera (Team Sunweb). “It’s nice to be back with the team,” Lepistö said, referring to being out of competition for a few weeks recently due to illness. “I feel pretty relaxed. I’m happy to help the team and work for others where I am needed.”

“Maybe we can help Lisa [Klein] get on the podium on some stages too,” she added, thinking about her team’s success as much as her own. “It’s nice to be back on the podium because I wasn’t sure about my shape but somehow I was there today and could jump on the podium. It’s a nice feeling.” 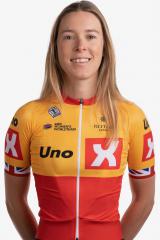 With all of the favourites finishing safely in the bunch, none of the jerseys changed shoulders. Van der Breggen remains the overall leader, Van Vleuten still leads both the points and QOM classifications.

Orica-Scott DS Gene Bates explained the team tactics for the day: “We wanted to have the easiest day possible today. We knew the steep climb was going to be the hardest part. The girls were really good, we had van Vleuten and Amanda Spratt in the front when it split slightly over the top, but then it all came back together for a sprint finish.”

“It was pretty dangerous with a lot of near-misses in the final, so we are just really happy to get through the day safely,” he said. “We aren’t really focussing on the mountains classification, but Annemiek picked up so more points today, so if she continues to lead that then that’s great. But our main focus remains on the overall.”

“It was fast today but not much happened,” said Van der Breggen about the stage. “We were over the Poggio with a steady pace and a had a small group for a moment, but in the downhill things came together again. After that it was clear that some teams were going for a bunch sprint, which was fine for us.”

Stage four obviously has ‘sprinter’s stage’ written all over it. Since there are no QOM points awarded during the stage, and neither will there be QOM points up for grabs in the stage five individual time trial, Annemiek van Vleuten (Orica-Scott) will keep the green jersey for at least another two stages.

Tomorrow will offer another chance for Chloe Hosking (Alé Cipollini), Kirsten Wild (Cylance Pro Cycling), Coryn Rivera (Team Sunweb) and Giorgia Bronzini (Wiggle-High5) to take a victory in the Giro Rosa. Or has Hannah Barnes (Canyon-SRAM) another bunch sprint win up her sleeve for tomorrow?

Check back tomorrow for the Giro Rosa Round-up of stage four!