BRECKENRIDGE, CO (CT) — The net result of Friday’s second stage of the inaugural Colorado Classic produced that rare outcome for the queen stage of a tour — two winners, so to speak, with the general classification remaining wide open.

Make no mistake, only one rider crossed the finish line first — Colorado native Alex Howes, of Cannondale-Drapac, who bridged across with two other riders to a solo TJ Eisenhart late on the hilly, high-elevation 10-lap race and then won a two-up sprint against the Holowesko-Citadel rider.

Eisenhart, however, arguably had the more impressive day.

The 23-year-old from Utah put on a demonstration of strength and determination, riding off the front from the gun, first with Daniel Eaton (UnitedHealthcare), then alone for the second half of the 103km stage, before he was caught on the final ascent of the steep Moonstone Road.

Along the way, Eisenhart picked up key intermediate time bonuses which would factor importantly at day’s end.

Once caught by Howes and Peter Stetina (Trek-Segafredo), Eisenhart did not give up, attacking on the descent into Breckenridge, gapping off Stetina, and forcing Howes to chase.

Eisenhart was no match for Howes in the sprint, but the six seconds of time bonus he earned for finishing second, plus five seconds picked up on the road, put the 23-year-old into the race lead by one solitary second. It would be difficult to argue that he was not the day’s most aggressive rider, even if that subjective award was presented to Stetina.

With two stages remaining — a climbing day on Saturday with a long run-in to the finish in Denver, followed by a flat circuit race in Denver on Sunday — the GC will almost certainly be decided by time bonuses between Howes, a punchy climber, and Eisenhart, a strong time trialist who also climbs very well.

For the moment, however, both men were celebrating on Friday in Breckenridge — one in the leader’s jersey, the other the stage winner.

“At the moment I saw the Colorado Classic on the UCI calendar, it went directly onto my calendar.” Howes said after his win. “This is like Christmas for me here, to get the win on the queen stage. I really wanted to win here today, because whoever wins today has a great shot at winning the overall. You always have a plan, but plans don’t usually work out.”

Meanwhile Eisenhart basked in the glory of the light blue leader’s jersey, a perfect match for his trademark puka shell necklace.

“This jersey is wicked cool, I love it,” Eisenhart smiled. “It matches my turquoise, matches my eyes. My mom always said I look good in blue.”

Asked how he thought the GC would shape up, Eisenhart said he knew Cannondale would fire all its bullets trying to take the jersey — but that he wasn’t going to let it take away from his success in Breckenridge.

“Cannondale is going to go berserk for that one second,” he said. “It’s a tight race, but I’m not concerned about it. Maybe I’ll worry about it tomorrow, but right now I am just stoked to be here. I am just going to be stoked to get back to the hotel, I’ll be stoked to have some massage, listen to some music, have some dinner, and celebrate with the team. It’s lame to already think about them taking the jersey. We are in the here and now. The future doesn’t exist, and the past is over, so it’s all about the here and now.”

The model of the Colorado Classic has raised the eyebrows of traditionalists, but Friday’s stage earned its place, evoking memories of the 2016 Rio Olympic course or the 2015 Richmond world championships.

The stage, a 10km circuit around the town of Breckenridge and the pitches surrounding, marked the continuation of the pseudo-experimental four-day race. No neutral rollout preceded the relatively short, 100 km race, and attacks flew literally from the gun.

Eisenhart (Holowesko-Citadel) gambled on an early move, riding four circuits with Daniel Eaton (UnitedHealthcare) before continuing on a solo journey up the remaining four laps.

It was a course that appealed heavily both to the racer and the spectator.

Lap after lap, as Eisenhart made his way through the tunnel of noise on the steepest pitch of Moonstone Road, the roar of the ten-deep crowd amplified. The circuits meant that crowds could feed off the spectacle of the race multiple times over the three hours, and a full-blown party was waged near the KOM marker atop the course.

It appeared as if professional cycling in the United States was alive and well in the neighborhoods above Breckenridge. The climb’s spectacle, at it’s essence American – fueled by Coors beer and chest-thumping dance music — appeared on par with the icons of the Mur de Huy or the Kapelmuur in its own way. And the racing was also.

“It was a beautiful stage,” Eisenhart said. “It was just the pure basis of racing. There weren’t teams controlling, it was pure racing straight from gun. It was simply down to who has it and who doesn’t. It was taking off the gloves and boxing — brutal, but radical.” 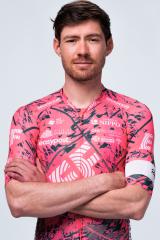