A sunny Autumn day welcomed the women’s peloton to the start line in Bergen, Norway, on September 23rd for the season’s finale. At the sound of the start whistle, 153 riders rolled out in search of rainbow glory, yet all the eyes were on the eight riders in orange.

The Netherlands’ star-studded line-up made them the top favourite for the win, but the other 145 riders were determined to put up a good fight.

The course, a vast contrast to last year’s flat and hot championships in the Qatari desert, featured a little bit of everything: undulating terrain, smooth highways, cobbles, one leg-zapping climb and a fast and slightly downhill run-in to the finish.

The peloton completed the 19.1-kilometre course eight times, and every lap, new breaks were formed and reeled back in. As the lapboard counted down, the breakaways increased. As soon as one was caught, another one was formed. Only those who had managed to survive the taxing laps, unfortunate crashes and constant surges remained.

Among them was Chantal Blaak. A worker and road captain for the women in orange, Blaak had ridden into the wind, chased down breaks, countered and attacked. She’d hit the deck and believed her race was over when precious minutes ticked away as she tried to free herself from the jumble.

But she persevered, expertly maneuvered her way through the cars and back to the peloton. Her kit and skin were torn but her spirit undeterred.

In the final lap, she found herself in a promising breakaway with teammates and top race favourites Anna van der Breggen and Annemiek van Vleuten. And while the other riders all looked to Van Der Breggen and Van Vleuten, Blaak attacked, leaving the other seven riders to gamble and play the cat-and-mouse game.

On a team filled with champions, you’ve got to take every chance you’re given and Blaak took hers with both arms. In the drops, head down, Blaak powered away.

Still bleeding and showing the marks of her crash, Blaak grabbed her head as she came across the finish line solo. That she, a domestique who had been at the service of the formidable Dutch squad all day, would walk away with the win was unimaginable. But she’d believed she could do it. Her perseverance, her willpower, her perfect timing rewarded with the ultimate prize: the rainbow jersey.

Behind her, the peloton caught the fumbling chasers and sprinted for second place en masse. Van der Breggen and Van Vleuten started the sprint early, going head-to-head, but it was Australian Katrin Garfoot who crossed the line in second, followed by defending world champion Amalie Dideriksen (Denmark).

Also be sure to check out this gorgeous gallery from the women’s individual and team time trials. 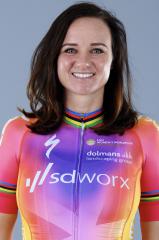