In the final weeks leading up to the UCI Road World Championships, riders were looking for some fierce racing to gain the last bits of fitness.  Some riders opted for the Boels Ladies Tour last week, others entered the Lotto Belgium Tour – and some even did both.

The 2017 Lotto Belgium Tour kicked off with a short prologue on September 5th, followed by two undulating stages and a grande finale on Friday, Sept. 8,  which included no less than 12 KOMs, including up the infamous Muur of Geraardsbergen twice.

The tour quickly became a thrilling battle of European road champion, Marianne Vos, and her WM3 Pro Cycling team against Belgian road champion Jolien D’Hoore of Wiggle-High5. After D’hoore bested Vos in the prologue by a millisecond, the golden leader’s jersey swapped hands back and forth between the two, and the brutal final stage would be the decider.

But in a surprising turn of events, the wet and challenging final stage caused a last-minute GC overthrow. In a massive shake-up, it would still be WM3 Pro Cycling that walked away with GC victory, but on account of Vos.

After a well-timed counter-attack and a brave final push to shed her breakaway companion, Ruth Winder (USA), it was former Dutch road champion Anouska Koster (WM3 Pro Cycling) who took the stage victory with a big enough gap to also take home the leader’s jersey.

The Cor Vos photographers were on site to capture the battle in Belgium. And you can watch the video highlights here as well. Due to injury, Vos had to sit out parts of the season and is looking to find peak fitness in time for the World Championship road race on September 23rd.

Vos was the last rider out of the start block for the 4-kilometre time trial, chasing Belgian favourite Jolien D’Hoore. D’Hoore powered through the finish, and stopped the clock at  5’32”. When Vos came in, she looked like she might beat it. Instead, she too stopped the clock at 5’32”. But after a close review of the timing, D’Hoore came out on top, just 0.17 of a second ahead of the Dutchwoman.

Americans Coryn Rivera and Megan Guarnier (riding for the USA national team) finished in third and fourth place, respectively, within just 9 seconds of the winner.

Stage 1: Another tête-à-tête between Vos and D’Hoore

Lenny Druyts (Sport Vlaanderen-Guill d’Or), Trine Schmidt (Lotto-Soudal) and Kaat Hannes (Lensworld-Kuota) tried their luck in the break, which got formed early in the 114-kilometre stage with start and finish in Ninove.

At 40 kilometres from the line, Wiggle-High5 upped the tempo. While Druyts dropped out of the front group, 11 riders joined Hannes and Schmidt, including the GC podium.

Entering a closing circuit of 11 kilometres, the gap to the bunch was 1’20”. Some riders attacked the lead group in an attempt to prevent a sprint, but it was to no avail. In the bunch sprint, it was Vos who came out ahead this time, besting D’Hoore and Rivera. Vos would take over the leader’s jersey while Rivera stayed in the best young rider’s jersey.

There were nine hills in the 106-kilometre stage two and Barbara Guarischi (Canyon-SRAM), Vita Heine (Norway national team) and Lotte Kopecky (Lotto-Soudal) used them to their advantage to distance themselves from the pack. After Winanda Spoor (Lensworld-Kuota) bridged across 35 kilometres into the stage, the break of the day was set.

As the kilometres trickled down, WM3 moved to the front and rode full gas in support of their leader Vos, but it was getting close.

In another nail-biting finish, the quartet was well into the last kilometres when the pack caught them, and a bunch sprint ensued. WM3 organised a lead-up for Vos, but D’Hoore got an even better one: Vos herself. She came around the former world champion just in time to nip her at the line, and take back the leader’s jersey. Stage 3: A surprising turn of events

Going into the final stage, Vos and D’Hoore were tied in the GC, leading with 16 seconds over third placed Rivera, and 27 seconds over Guarnier. Tensions ran high, and on the docket was a true Classic-style race complete with steep hills, cobbles, rain and wind.

A split formed early on, and a breakaway of 11 riders went clear. Neither Vos nor D’Hoore made the split, but their teams were represented in Anouska Koster for WM3 and Giorgia Bronzini for WiggleHigh 5.  Other breakaway companions included Emilie Moberg (Norway), Ruth Winder (USA) and Skylar Schneider (USA).

Vos successfully bridged over to the break, but so did Rivera. Hoping to gain time in the GC, Rivera continued to go off the front and Koster went with. The duo, however, was brought back at which time Winder countered, and Koster again reacted.

This time, the duo stayed clear and Koster’s persistence paid off as she attacked one last time, dropping Winder in the final metres of the race to come across the line solo –claiming both the stage victory and the overall win.

In the end, Vos managed to hold onto a podium spot as well as the points jersey, finishing third in the GC behind Koster and Winder. 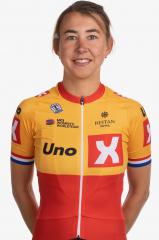