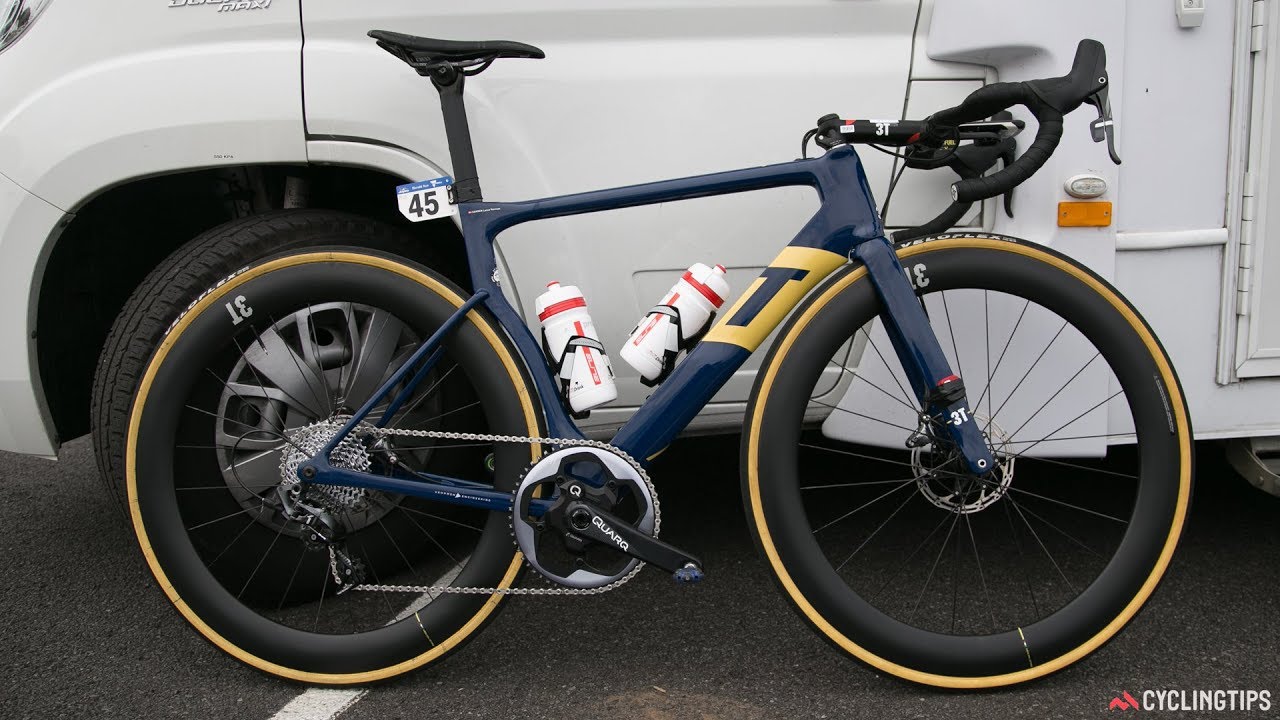 Little more than a week into the race season, Aqua Blue Sport have raced their unique 3T Strada disc-equipped 1x-geared bike to a win. It was former Olympic gold medalist on the track, Danish rider Lasse Norman Hansen, who grabbed the team’s first UCI win of the 2018 season. Currently Hansen holds onto the leader’s jersey leading into the third stage of the Jayco Herald Sun Tour.

Coming down to a sprint finish with nine in the break, Hansen bested the likes of Steele von Hoff (Bennelong-SwissWellness) and Cameron Meyer (Mitchelton-Scott) to take the win on the opening road stage of the Herald Sun Tour. Getting him over the top was a 54T chainring, large by anyone’s standards, but enormous when you consider there’s no front derailleur to make things easier.

To much publicity, the Aqua Pro team announced late last year they will be riding the 3T Strada frame in 2018, and with that, will be forced to use a single-chainring and disc brakes throughout the season, no matter the race. SRAM joined the list of team sponsors, supplying its Force 1x HRD groupset, and the traditionalists were up in arms. New for 2018, the 3T Strada is a somewhat futuristic aero road bike designed with direct input of Gerard Vroomen, co-founder of Cervelo. With a frame shape that closely follows the front and rear wheels, it’s evidently an aero bike from afar.

By designing a frame without a front derailleur mount, 3T were able to optimise an area of the bike that’s often compromised. In this, there’s no second chainring, no front derailleur, and far fewer seattube design limitations to get in the way of the wind.

Similarly, bidon cages are shielded by the downtube, while a lengthened headtube makes up for a minimal fork crown, allowing the front wheel to tuck closely to bottom of the downtube. Add in the cable routing that enters the frame from behind the stem, stealthy thru-axles, minimal flat-mount discs and an integrated seatpost design, and the 3T Strada’s racing purpose, despite its 1x gearing, quickly becomes clear. With one chainring, the bike offers a single shift level. For this, the mechanical Force 1 HRD groupset only needs the right side (rear) shifter, and that uses the American company’s DoubleTap design where a quick click sees the derailleur shift to a harder gear, while two clicks or more see the derailleur move in the opposite direction. The left hydraulic brake lever is effectively gutted of its shift internals.

Hansen’s use of a 54T chainring along with the 11-36T cassette provides the same low gear ratio as a 39T chainring with a 26T cassette, a gear commonly considered low within the peloton until only recently.

When asked about the gearing, Hansen provided honest insight.

“First off when we started riding I needed the smaller chainring, I thought,” he said. “The jumps between the gears I found annoying, but now that I got used to it, I don’t mind it all.”

Hansen continued to say that on the flatter terrain of the Herald Sun Tour his use of a such a large chainring was no problem, but mountainous stages in the future will likely require a smaller chainring.

The SRAM Force HRD hydraulic disc brakes (160mm rotors) are also something Hansen admits he’s getting used to, with the Danish rider accidentally locking up his rear wheel in the tour’s prologue, an accident that arguably cost him the win.

Matt de Neef and Dave Rome contributed to this report.