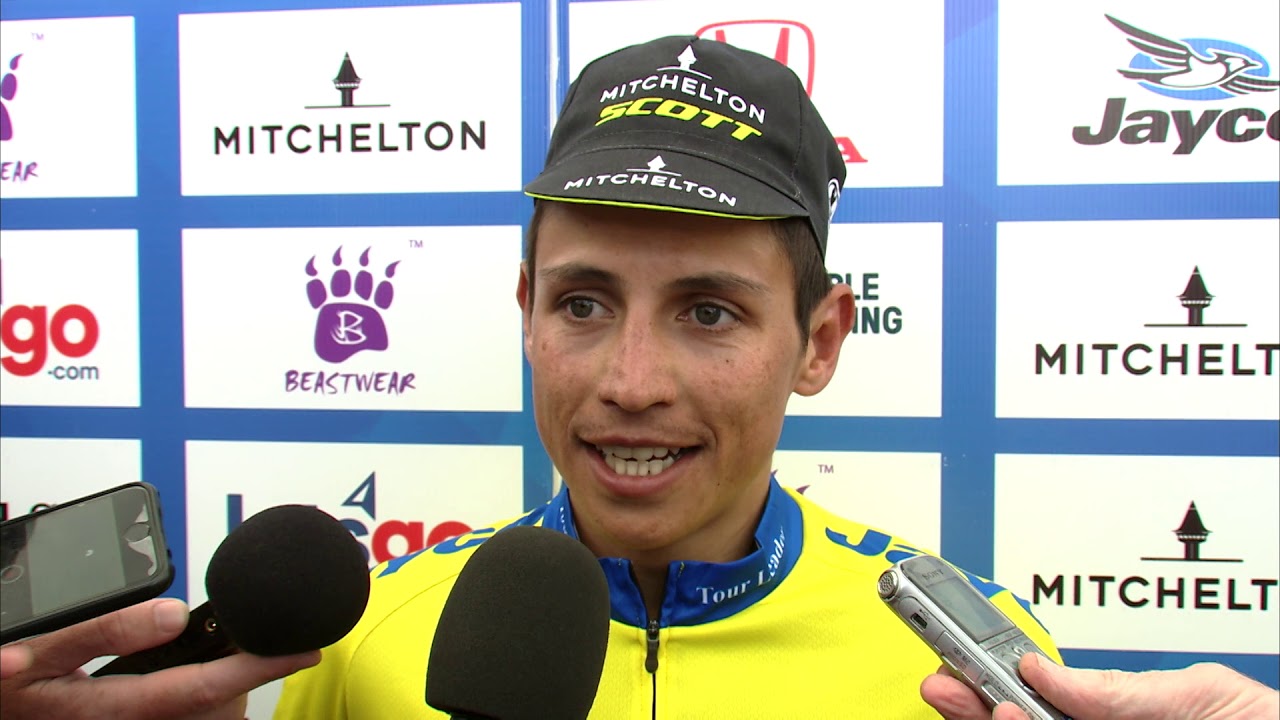 LAKE MOUNTAIN, Australia (CT) – The day began with Mitchelton-Scott at the front of the race, seven riders leading the peloton out of Mitchelton Winery. It ended in much the same way, with five of those seven riders at the pointy end as the race finished atop Lake Mountain.

The upshot: with one stage remaining in the 2018 Jayco Herald Sun Tour, Australia’s only WorldTour team now occupies all three places on the overall podium.

The top step belongs to Esteban Chaves, the Colombian having ridden away with the race just 3km into the stage-ending 20km climb. Cameron Meyer sits second and defending champion Damien Howson is third, those two having finished in a group of 13 roughly a minute behind Chaves and 27 seconds behind solo runner-up Alexander Evans (Mobius-BridgeLane).

Stage 3 of the 2018 Sun Tour was the longest of the race at a Grand Tour-like 218km. And, with two long climbs before the stage-ending Lake Mountain ascent, it proved to be a marathon day in the saddle. It was a break of 10 that led for much of the day, but it was the Australian Continental team Mobius-BridgeLane that really ignited the race.

With the break caught 5km from the start of the final climb, Mobius came to the front and set a blistering tempo on the front of the bunch.

“They rode really hard from the bottom and really within 500 metres to a kilometre there was a very select group of 10-15 guys,” explained Howson. “Everyone within that group, myself included, was pretty pinned.”

“I had the team lead me out for the first couple of k — they were really driving pretty hard,” Evans said. “I had to ask them to slow it down a few times or they were going to blow me up before I got to the top!”

After the Mobius riders pulled off, and with overall leader Lasse Norman Hansen (Aqua Blue Sport) dropped, Chaves made his move on the steepest section of the climb.

“The plan [was to] attack at the beginning when the climb is hard — the hardest part is between 18 and 17km to the finish line,” Chaves explained afterwards. “If they catch me, we try to keep it all together with Cameron [Meyer].”

They never caught Chaves. Evans got the closest in what was the most impressive ride of his young career. But he too finished some 42 seconds in arrears.

“[I] tried to follow him and just couldn’t quite bridge the gap in the end,” Evans said. “But [I] held it at about 15 seconds for half the climb and then he just sort of rode off a bit.”

Behind Chaves and Evans, Lionel Mawditt (KordaMentha Australia) and Dylan Sunderland (Bennelong-SwissWellness) joined forces and tried to get across. They wouldn’t reach Evans — and certainly not Chaves. Instead the pair were caught by the remnants of the peloton — a peloton dominated by Mitchelton-Scott.

For much of the climb the Australian WorldTour team had four of the 14 riders in the chase group, with other teams only having a maximum of two. Mitchelton-Scott were holding all the cards: they had Chaves up the road and they had the numerical advantage in the chase group, including Meyer who started the day in third overall.

“Initially Mitchelton-Scott were driving the pace, just controlling that gap with Chaves,” said James Whelan (KordaMentha-Australia), who finished in the chase group. “Eventually they slowed it down a little bit and the Trek guys had to take over.”

But when Trek-Segafredo did take over, their efforts were swiftly thwarted by Mitchelton-Scott. Niklas Eg (Trek-Segafredo) would attack, only to be marked. His teammate Ruben Guerreiro, ninth on GC, would try his hand, also failing to get away.

For Trek, the plan hadn’t necessarily been to win the stage. Rather, they were looking at the bigger picture.

“We were trying to bring the gap down to Chaves because Kim [ed. sports director Kim Andersen] told us that if you brought it down enough, Ruben would be on the podium overall,” Niklas Eg told CyclingTips. “So that was the main goal and when we see that was not possible, we just tried to go.”

Seemingly all of the non-Mitchelton-Scott riders in the chase group attacked at some point in the closing kilometres, but nothing was sticking. Not only did Mitchelton-Scott have things under control — as king of the mountains Nathan Earle (Israel Cycling Academy) told CyclingTips, they were also assisted by the nature of the climb.

“It was so fast — few little downhill bits and just a couple percent uphill. I don’t think we went below 30 k an hour,” Earle said.

“So I was thinking ‘That’s alright, I’ll just wait for it to get steep again and then lay down an attack’. And then other guys kept attacking but it was just so fast and flowy you could just hook on their wheel.

“And then the k’s just ticked down pretty quickly and the steep part never came and we got to the finish for a sprint.”

A minute and nine seconds after Chaves threw his hands in the air, and 27 seconds after Evans was next over the line, Guerreiro led the chase group into the Lake Mountain Alpine Resort. Meyer was next, then Howson, the Mitchelton-Scott pair joining their Colombian teammate on the overall podium, in that order.

Chaves had made it look easy but, he says, he wasn’t assured of success until the very end.

“I have no 100% security that I would take this stage and the GC until 300m to the finish line,” he said. “It’s not a typical climb — it’s more or less ‘flat’. It’s windy as well, and when you go in the group you save a lot more energy [than] when you go solo with the wind.”

The significance of sweeping the podium isn’t lost on the charismatic Chaves. But he’s also got his eye on tomorrow’s final stage — a tough circuit race around Kinglake.

“Winning is not easy. So we need to enjoy it, keep our feet on the ground, work hard, continue to love what we do, and finish tomorrow,” he said. “It’s a hard one — people will attack for sure and we need to keep everything in control.”

He’s right — the attacks will surely come as the riders tackle five laps of a 31km circuit that includes a 5km climb. But it will take a near-miracle for the Sun Tour to be won by a team other than Mitchelton-Scott.

Chaves sits 32 seconds clear of Meyer at the top of general classification, with Howson another seven seconds down. Guerreiro is in fourth, at 45 seconds, while the rest of the peloton is more than a minute behind.

The race is all but done.