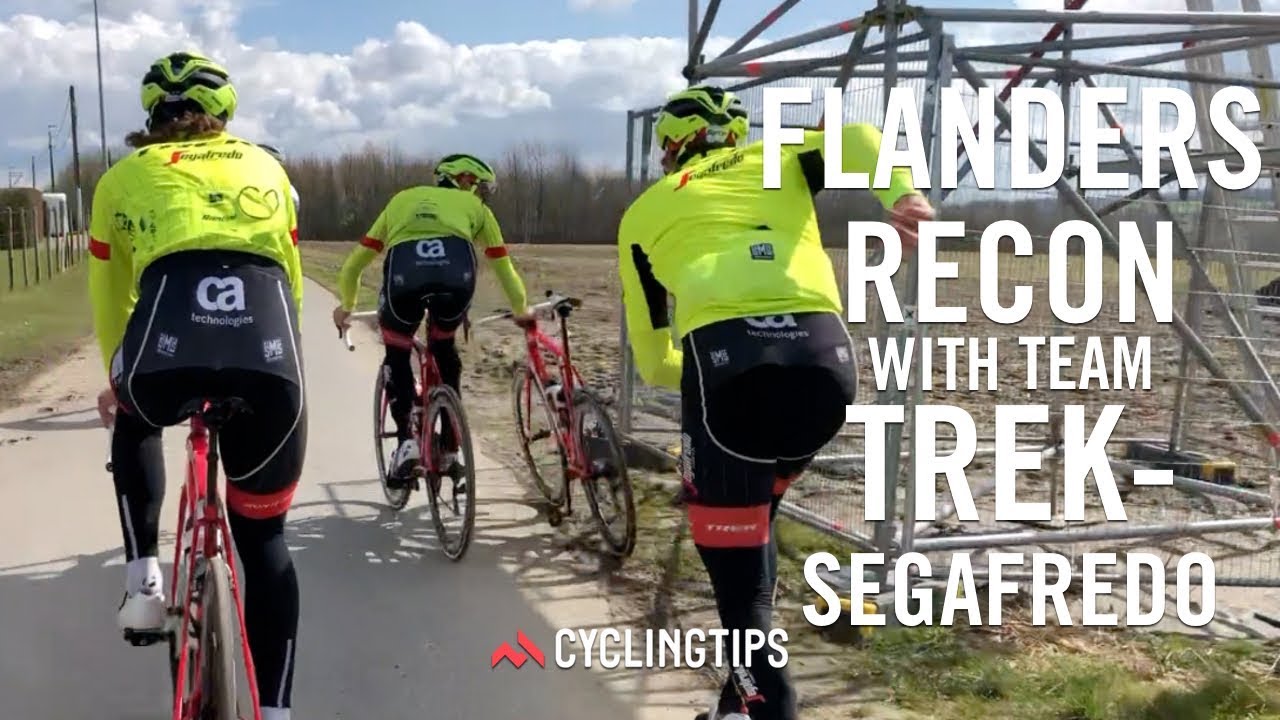 This is the first of Caley Fretz’ recurring columns on racing and riding. It’s also sometimes about not riding, and occasionally about coffee, or maybe about bikes and equipment. Ripped from the pages of Caley’s notebook, straight to your screen.

Imagine if the scruffy little mountain goats that run around on thousand-foot ledges in nature documentaries were the size of oxen and could still jump around without falling. Then imagine trying to follow them down a cliff. That’s the best analogy I can think of for riding Flanders recon behind a team that could very well win on Sunday.

Dave Everett and I sat behind the group for the better part of three hours. We promised not to move up, because crashing someone on the eve of Flanders is not a good look. The Flanders seven rotated in front of us, two by two, occasionally splitting off and then rejoining as one rider or another would hit a cobbled sector at full chap. It was Thursday, a day after Dwars door Vlaanderen, and they were tired. Not that we could tell.

This wasn’t some epic, massive ride. We kitted up and rolled out for about 100km, taking in the Muur, Kwaremont, Paterberg, Koppenberg, and half a dozen others. Its most striking feature was not difficulty, it was disparity. That pros are better is not exactly newsworthy; precisely how much better occasionally bears repeating.

The heaviness of fatigue began its creep around Koppenberg and by Steenbeekdries was in full bloom. When we were at level 9, they were at level 5. And all the while they floated, like great oxen mountain goats. “It’s amazing what four years at this level does to you,” Kiel Reijnen said. He’s one of Trek’s classics domestiques. He’ll work in the first two-thirds of the Flanders and then just try to finish. We were spinning away from the top of the Koppenberg. “I thought about stopping on this one last year,” he said, referring to the actual race. He’d chased for an hour with Luke Rowe and the Koppenberg was “just brutal,” he said.

I mentioned that my legs hurt. Reijnen said his legs hurt too, but they always hurt. He raced Dwars door Vlaanderen yesterday, 180km in the rain. His eyes were still red from the dirt and water flung into them for four hours. “I can’t remember the last time I felt fresh and raring to go,” he said. “But you can always do the work. You can always ride hard. It’s almost like you’re numb to it, and that actually makes you faster.”

I used to race against this guy. “Against” is actually an exaggeration, but we were in a breakaway once together, in a crit in Denver in maybe 2009 or so. Maybe a few other times, too, I can’t recall. I remember the day in Denver because my coach yelled, “Don’t work with him!” from the sidelines every lap. Good advice, if a bit useless. Working with Kiel or not working with Kiel was not going to change the outcome at the finish. “And I’m completely different now,” he said on the Koppenberg. By different, he meant better.

Recon day is just a shakeout, really. It’s not like they’re scoping lines or inspecting corners. These guys have ridden these roads for years. Koen De Kort is on his 13th Flanders; Gregory Rast is on 15. That’s 3,900km of Flemish racing in Rast’s legs, before you add Harelbeke, Dwars, Gent-Wevelgem. I ask De Kort: Is recon really important? He shrugs a bit.

The team makes sure the gear is working and gets a decent ride in just so their legs don’t feel heavy on Sunday. John Degenkolb rode his Domane, which will be used at Roubaix, and decided he needed a deeper drop on some new bars. The rest rode their Flanders bikes, aero Madones, with 28mm Flanders tires and race-day tire pressures. No flats; a good sign.

They also laugh a lot. For example: At the top of the Koppenberg, Rast jumped into a port-o-let. I wasn’t sure at first whether he was taking a piss or taking the piss. You know, a cheeky little, “I’ve been up here so long I had time for a bathroom break while waiting for you.” I think it was the latter because he was grinning as he stepped out of the plastic door. His grin faded rather quickly when a teammate grabbed his bike, which was leaning against the toilet, and rode away, rolling it down the narrow lane. Rast chased on cleated shoes. Running in cycling shoes turns anyone into Charlie Chaplin. Physical comedy. Everyone laughed. Maybe it wasn’t the joke Rast was going for; it was an even better one.

(Watch a video of the bike theft above.)

On some cobbles around kilometer 80 Dave and I tailed off a bit — a protest, we insist, for the lack of a promised coffee stop — and team director Dirk Demol pulled up alongside in a team car. He gave us a little wink. We’d chatted over a pair of Duvels the night before about his Roubaix win in 1988, thirty years ago this week. Demol lights up when you ask him about it, the longest successful breakaway in the race’s history. It’s a record that still stands. 222km. Practically from the gun.

Demol was a domestique, “not strong enough in legs or head” for anything more, he said. His win came before race radios. With twenty kilometers to go a stream of cars flew past, normally an indication that the gap was shrinking to nothing. Officials force the cars forward when the gap drops under a minute. But these weren’t cars in the race. Driving one of them, a press vehicle, was Roger De Vlaeminck, Mr. Paris-Roubaix himself, a four-time winner and one of Demol’s old team leaders. He leaned out the window. “The winner will come from one of you,” Demol remembers him saying. The gap was still three minutes. “This is your chance.”

When Demol was fourteen, he left school and started working in a factory. He rode after his shifts, raced as much as he could. He won a lot. He won on cobbles most of all. “I never considered myself a cobbles rider, but thinking back to my early years, I always did best there,” he said, taking a sip of Duvel. He had the gift of the stones, that intangible something that lets the best float when the rest of us sink. One day a letter (“There was no email,” he reminded us) offered him a chance to race Roubaix with the Belgian national team. It’s why he’s here drinking beer in a black and red Trek jacket, a successful racer and director, and not still working in a factory somewhere. That gift.

I followed Degenkolb, another Roubaix winner, a rider who floats, through Stationsberg, the downhill cobbled sector after Steenbeekdries. The high-speed cobbles shake your hands and fingers so hard the tendons feel like they’re tangling. Your pinky fingers start wandering about. It shook my hands like that, anyway. Not so much his. I’d like to put it down to equipment but let’s not kid ourselves. Degenkolb was smooth. I was not. By the Taaienberg, it was over. It’s not surprising that even when these guys are going slow, they’re going fast. What is surprising is how much you have to recalibrate what “fast” is. The disparity of effort is astounding. Our recon ride, hanging on the back of Trek-Segafredo’s Flanders team, ended as it was destined to.