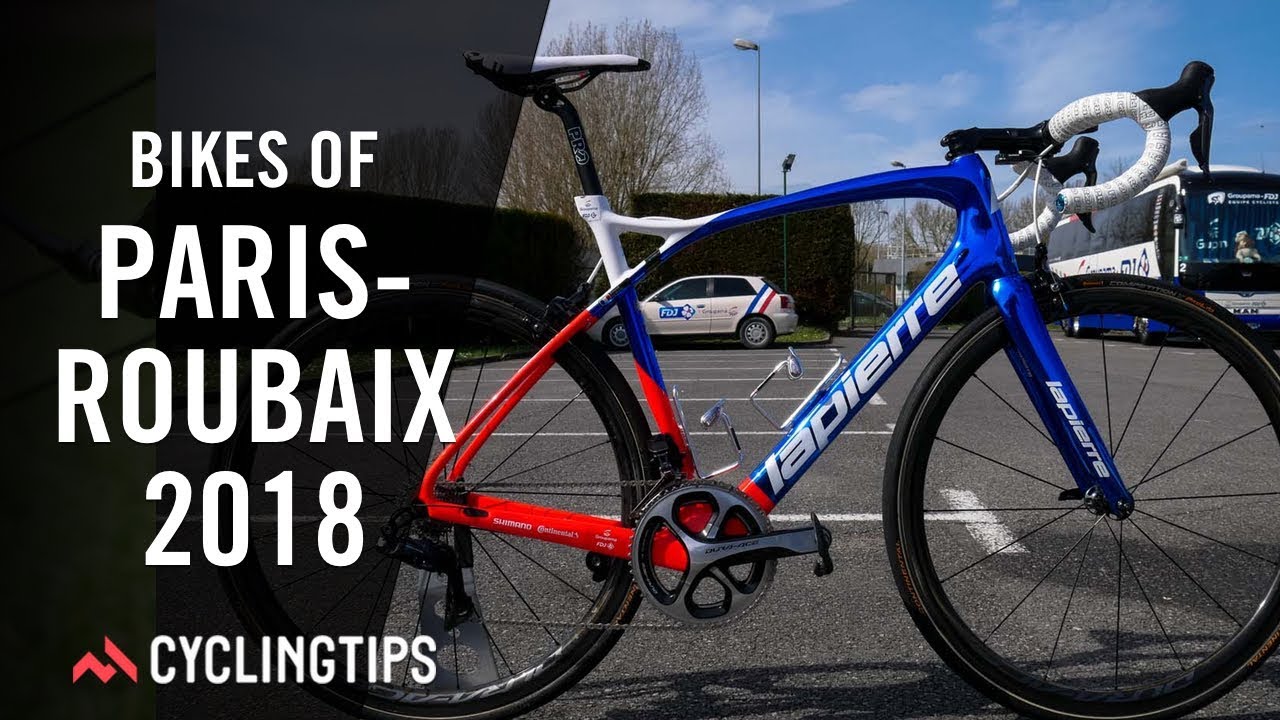 Paris-Roubaix tech gallery: The bikes that took on the 2018 cobbles

The race is over, the bodies are battered and bruised, and the machines that carried the riders to the finish will now be cleaned, repaired (if needed), and stored away for another year. Paris-Roubaix is uniquely demanding, and not just on the riders; the bikes that they use receive a beating, too.

Most of the tech choices at Paris-Roubaix were similar to recent years, with the mostly dry conditions keeping the truly weird-and-wonderful machines at home in the service course. There were some top-mounted brake levers and double-wrapped bars, but many riders and teams – but not all of them – went with relatively standard “endurance” road bikes for their softer ride, more stable handling, and additional tyre clearance. Peter Sagan won on a Specialized S-Works Roubaix, for example, customized for the team with direct-mount rim brakes and a special version of the FutureShock front suspension with on-the-fly stiffness adjustment. However, his breakaway companion, Silvan Dillier, was on his standard Factor O2.

Some riders, such as Heinrich Haussler, had originally planned for a mid-race bike change: a normal road bike set up for the first 100km, and then a cobble crushing machine for the bumpier latter sections of the course. But on the morning of the start, it looked as though many had changed their minds. With dry roads, a tailwind, and the promise of another fast race, stopping far a bike change before the cobbles would have been more trouble than it was worth.

Nearly every rider was on bigger tubulars, though, since the cobbles of northern France are one place where keeping it “rubber side down” is consistently challenging. It now looks like most teams and riders have settled on 28mm tubulars as the width of choice for Roubaix cobbles. There were a few exceptions, the major stand-out being EF Education First-Drapac on 30mm tubulars from Vitoria. Several of the Michelin-sponsored teams were using the new Pro Endurance in 27mm.

For many years, French company FMB was the tubular of choice for many teams, thanks to the extra comfort and grip provided by the tires’ ultra-supple casings. The tiny manufacturer has never officially sponsored a team, but given the unique conditions at Paris-Roubaix, most official tyre sponsors were comfortable looking the other way if it meant their team could earn a spot on the podium. But fewer teams were on FMB this year, and thanks to more dedicated efforts on the R&D side for cycling’s biggest one-day race, bigger companies such as Continental and Vittoria now seem to be the dominant force in the pro peloton, even on the cobbles.

One new brand we spotted was Wolfpack tyres. After talking with the Astana mechanics, it would seem the new brand is from one of the people who helped Continental and Specialized develop tyres in the past, and has now decided to go it alone and start his own company.

Those endurance road bikes may provide more comfort and more predictable handling than the riders’ usual dedicated road racing machines, but they also often have shorter reaches and taller stacks, too. We spotted a lot of riders on 140mm-long stems as a result, as well as plenty of -17° angles to help bring the bars back to their original position. FSA was a go-to company here, as one of the only easy sources for that size. Teams officially sponsored by FSA could proudly display the company logo, but others (such as Arnaud Demare of Groupama-FDJ) went with black electrical tape instead.

One might also assume that it would only be those smaller teams running older components, but even top teams like Lotto-Jumbo broke out some outdated gear – a fleet of previous-generation Shimano Dura-Ace C50 carbon tubular wheels – for Paris-Roubaix’s unique requirements.

There were very few teams using disc brakes this year, with Trek-Segafredo, Direct Energie, EF-Drapac, and Sunweb as the three stand-out teams that fielded a full roster of riders on disc-specific bikes. A lot of this is down to neutral service support, and the fear of having to wait that extra few minutes for a disc wheel. We have to wonder how long it’ll take until we see the full peloton move away from rim brakes, however, if only for the extra clearance they provide. Perhaps Mother Nature will ultimately be the deciding factor: another dry year will probably see rim brakes again, but one mudfest could be all that’s necessary to push teams to switch over.

Overall, there was little new technology on display. Other years we’ve seen weird, wonderful, and on occasion, products that have been a bit too far out there for use a second year. Have the professional peloton finally found what is ideal for the race’s demanding course? Is Paris-Roubaix really just a matter of double-taped bars and bigger tyres? Not if manufacturers have anything to do with it.