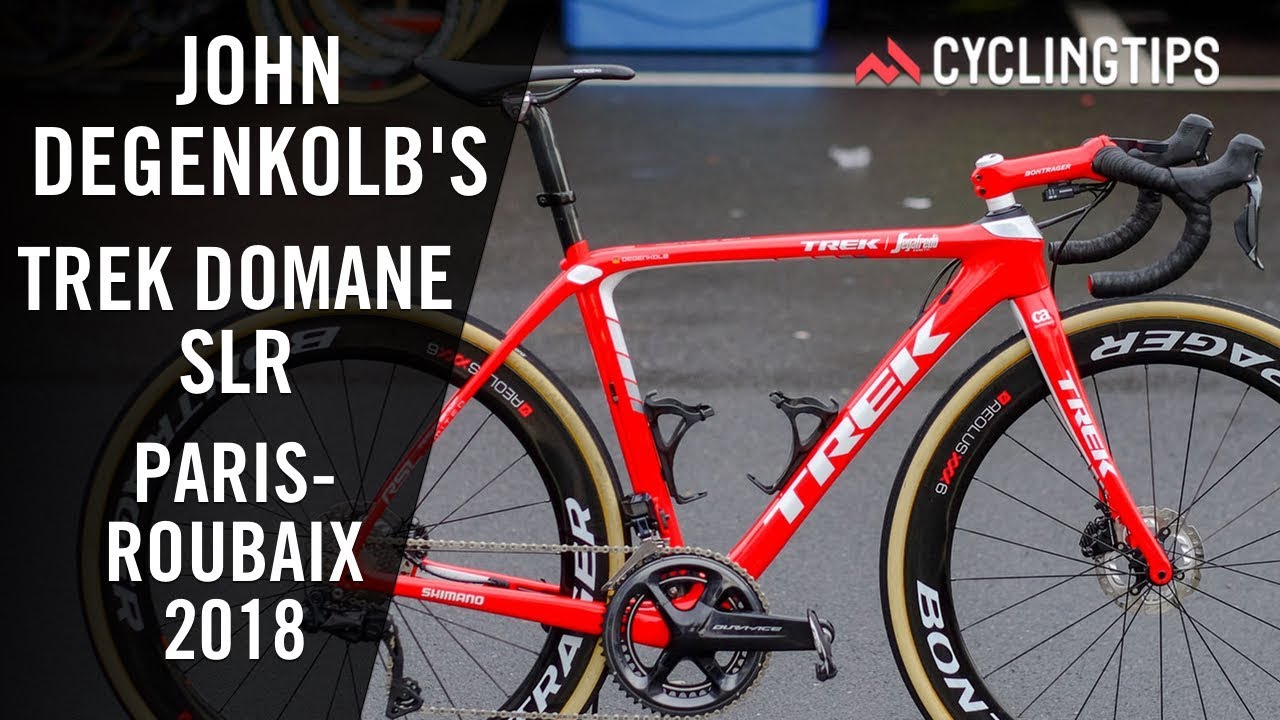 John Degenkolb’s already got one cobblestone trophy to his name; it’s probably sitting somewhere on his mantelpiece at home, wedged up against the trophy from his first Classics win in the same year, Milan-San Remo. After winning Paris-Roubaix back in 2015, where he outsprinted Zdenek Štybar and Greg Van Avermaet, it’s more than understandable that’ll he’ll be going into the race in a co-leaders role.

Unlike the Tour of Flanders, where riders tend to ride their normal bikes with slightly fatter tyres, Paris-Roubaix requires an equipment overhaul.

For Flanders, Degenkolb rode a custom-painted Trek Madone. His tyre choice was slightly wider than usual, and he had his mechanics swap his regular one-piece carbon bar and stem for a more standard stem with a Bontrager IsoCore carbon bar.

Roubaix cobbles are far more savage, and there’s a real need for a bike that can help smooth out the brutal pavé in some way. Degenkolb and the rest of the Trek-Segafredo team will use Trek’s Domane SLR disc bikes, which feature the novel IsoSpeed “decoupler” at both ends to provide more frame flex over the cobbles. It’s the first year that the team will field a full team on disc-specific frames.

Speaking with team mechanic Glen Leven, it was clear that the man knows his job like the back of his hand. Asking him to recite team riders’ preferences in equipment choice resulted in him quickly spewing measurements at us.

For Roubaix, there’s no custom paint scheme, and the entire team will be on standard team-issue red paint. Degenkolb will ride the RSL (Race Shop Limited) version, which has a shorter head tube and tighter front end geometry than the standard Domane SLR.

The bikes are fully kitted out with Shimano’s Dura-Ace Di2 groupset, bar one slight alteration: an Ultegra RX clutch-enabled rear derailleur. This is the first time that the clutch rear derailler will be used at Roubaix, but it has been tested at several races in the spring classics already and was spotted on a bike on the roof of the team car at Flanders.

For Roubaix, John will also change his crank length from his usual 172.5mm to a 170mm. We were told that he’s been testing this throughout the winter. Chainring size will be 54/42T with an 11-23T rear cassette.

There’s plenty of shifting options, too, with satellite/sprint shifters from the Di2 groupset placed on the top of the Bontrager Pro IsoCore VR-CF handlebars and on the inside of the drops. Stem length is also a little longer than what he’d use on his Madone, at 140mm instead of 130mm.

Other points of note are Shimano’s new crank-based power meter system, along with 140mm-diameter rotors front and rear. Degenkolb will also have the rear IsoSpeed decoupler set to the softest position when racing.

Check the video out to see what Degenkolb’s mechanic has to say about the bike that they hope will bring the German to his second Roubaix victory.

Ghosts of the Peloton: Roubaix winner Charles Crupelandt, 'Bull of the North'

Ghosts of the Peloton: Roubaix winner Charles Crupelandt, 'Bull of the North'