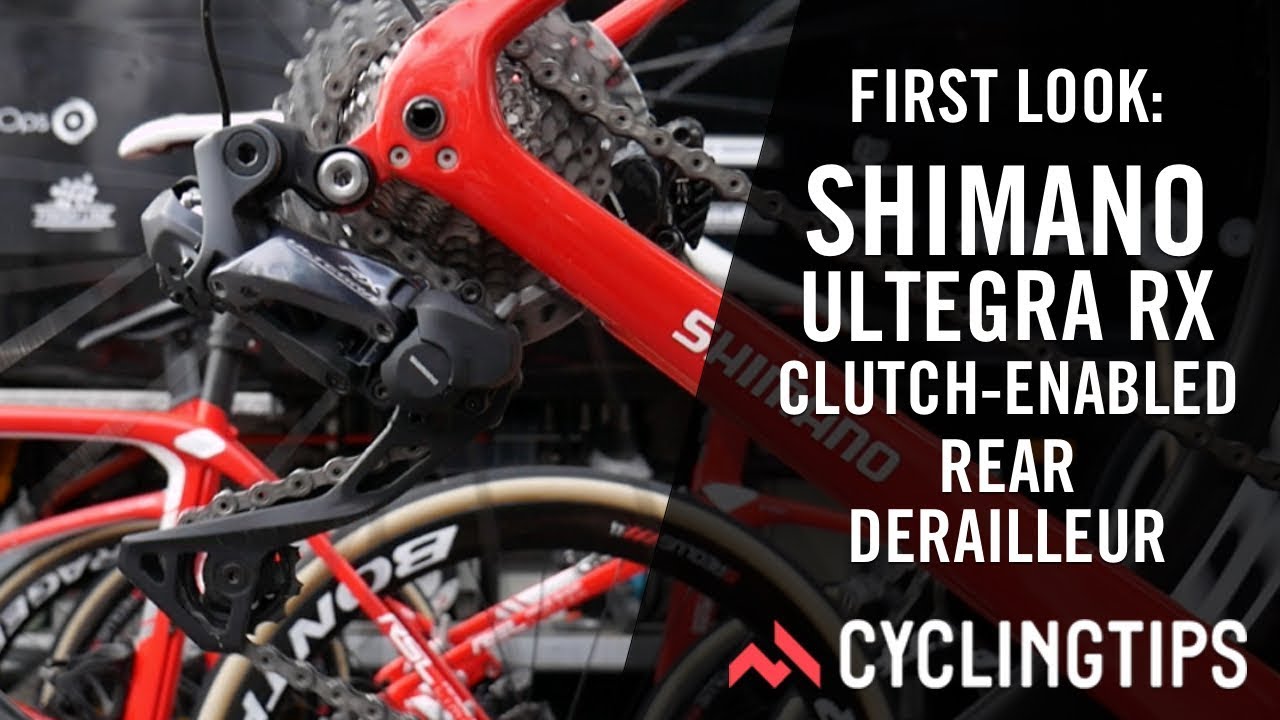 First of all, this isn’t an April Fools joke.

Shimano is bringing mountain bike tech to the road with its new Ultegra RX rear derailleur, featuring the clutch used in most mountain bike derailleurs to prevent chain slap and dropped chains.

The Ultegra RSX will be available in Di2 and mechanical versions, both with a long cage that should be able to handle anything up to a 34-tooth cog.

Clutch mechanisms are ubiquitous in mountain bike derailleurs and are a pivotal part of a functional single-chainring drivetrain, usually paired with a 1x-specific narrow-wide chainring. On a normal derailleur, the only thing preventing the pulley cage from bouncing forward is spring tension. With a clutch, the pulley cage resists forward movement but returns to its original position at a normal rate. A clutch allows the derailleur to maintain proper chain tension over rough surfaces. The result is far less chain slap and flop, and thus a decreased likelihood of dropping a chain, chainsuck, or mis-shifts.

You can watch how it works in the video above.

Degenkolb will run a traditional double chainring setup with a front derailleur, which makes the clutch somewhat superfluous from a chain retention standpoint. But the team and Shimano believe that the clutch provides an extra layer of security, as well as ensuring that shifting is unaffected by the bouncing of the cobbles. The clutch helps maintain adequate chain wrap around the cassette even over rough surfaces.

Bringing clutch technology to the road is a natural move as the definition of drop-bar riding continues to expand. It’s already possible to run a Di2 mountain bike derailleur with Shimano road levers, but it requires one to use a single-ring drivetrain (or an XTR Di2 front derailleur, but that won’t work well with road rings). Many riders want the versatility of a double chainring setup with the reliability of a clutched derailleur — now they can get it.

In theory, a clutch does increase drivetrain resistance slightly due to increased chain tension, which is a concern for racers. We’ll be testing this hypothesis in the lab quite soon, in fact. However, Trek estimates that the benefits over rough surfaces in a race like Roubaix outweigh any possible decrease in efficiency, as such losses are likely to be less than a single watt. The more consistent chain wrap should allow riders to shift more effectively on the cobbles, and make sure that the drivetrain is always ready to handle the power of a rider like Degenkolb.

The clutch does add load to the motor in the rear derailleur, which will decrease battery life. But Shimano’s battery life currently runs into the thousands of kilometers, so that’s not a particularly big deal.

More interesting is the possibility that we will soon see more 1x drivetrains in road racing. Currently, only the Aqua Blue team is running such a system, and it’s doing so all year long. The most likely next step is for teams to use 1x only in particular races, and the classics are a good match.

Riders already use tight front chainring setups in Paris-Roubaix, often a 54/44 or 54/42 (as Degenkolb uses). The little ring isn’t used by anyone at the front of Roubaix. So why is it there? Well, without a clutch in the rear derailleur, it offers security. If the chain drops on the inside, which is more likely than dropping to the outside when using a front derailleur, it has something to land on. Add a clutch and the chances of dropping a chain decrease dramatically. Add a narrow-wide 1x chainring, which alternates fat teeth and tall teeth, and you have a drivetrain that is very unlikely to ever drop a chain.

Again, there are some issues for racing. A 1x system increases chain bend when in the big and small cogs relative to a 2x used without crosschaining. Chain bend decreases drivetrain efficiency. That’s watts going out the window.

Probably not too many watts, though. Maybe not even one watt. So do the benefits of a clutch-enabled 1x system outweigh that drawback?

Matt Shriver, the technical coordinator for Trek-Segafredo, doesn’t think so. Not yet, anyway. While losing the front derailleur and one chainring may slightly improve aerodynamics and decrease weight, the loss of efficiency probably evens it all out. And having a front derailleur is still considered insurance in case the chain does decide to make a run for it. Generally, it’s possible to shift the chain back onto the rings while still on the move.

That means the Ultegra RX is mostly just an extra insurance policy in this particular use case — racing Roubaix. For the rest of us, it’s a great addition to a bike that will spend significant time off paved roads. It makes 1x Shimano road drivetrains possible without using a Di2 mountain bike derailleur, and makes 2x road drivetains a bit more secure.