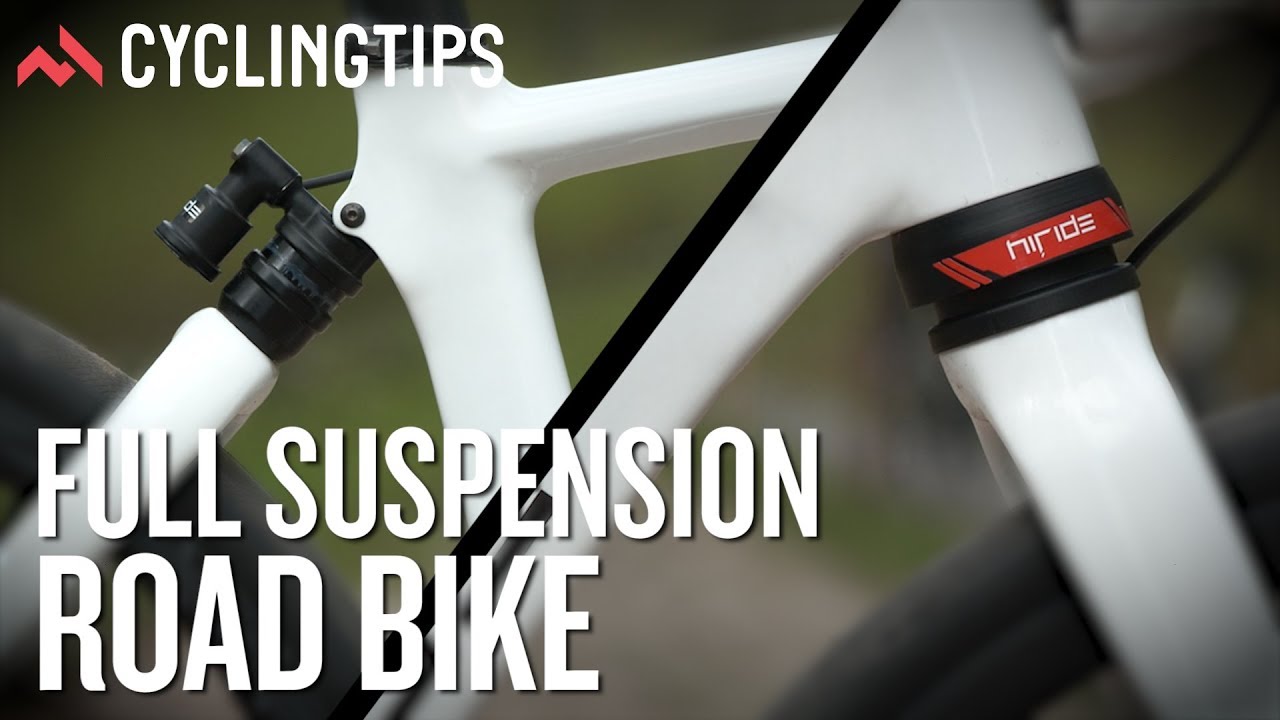 A small fleet of full suspension road bikes will line up for Paris-Roubaix under Team Sky on Sunday, each featuring a fully automatic lockout function developed by Italian firm HiRide. The technology was launched to the public this week on the back of the new Pinarello Dogma FS, but that’s simply the first bike to use it, not the last.

On Friday, we drove down to the Arenberg forest to try out HiRide’s clever electronically controlled full suspension tech for ourselves.

How the HiRide suspension works

The rear suspension, which offers 11mm of travel, is a simple elastomer setup with an electronically controlled hydraulic lockout. There are no pivots on either the Pinarello and the custom frames HiRide brought to our test. Suspension movement relies on flex from the chainstays. On the Pinarello Dogma FS, the first commercially available bike to use the HiRide system, those stays are carbon, but HiRide has been in discussions with another, unnamed frame brand that is planning to use titanium. The rear suspension is tunable by swapping the elastomer.

The system launched with a Pinarello road bike, but HiRide sees it as well suited to the gravel world. After riding it, I agree. The front suspension offers 20mm of travel and uses a coil spring and hydraulic damping circuit, located between the head tube and the fork. This is a marked difference from the system’s most obvious competitor, the new Specialized Roubaix. The Roubaix places its Future Shock between the stem and the head tube, thus suspending the handlebars but not the rest of the bike. More on why that matters a bit later.

Coil springs can be swapped out to account for rider weight, but there is otherwise no way to adjust things like preload or spring rate to rider preference.

Far more interesting than the relatively simple suspension units is the electronic wizardry HiRide uses to control them. It’s here where the company’s ties to advanced automotive and motorcycle suspension bear fruit.

Buried in the downtube are a gyroscope and accelerometers, which feed data to a “Smart Battery Pack,” where the system’s brain lives. Based on data from these sensors, the system decides, effectively in real time (lag is less than .01 second), whether to lock or unlock the suspension. The whole thing pairs with a custom Garmin app, which allows a rider to swap between manual mode and fully automatic mode, which locks and unlocks the suspension as it sees fit. This automatic system has Race and Touring modes. Race mode requires greater force to unlock the suspension. The system can also be controlled via a small button on the downtube.

Both shocks feature blowoff valves so that they unlock without any electronic input if you hit something while the system is locked out (the first row of cobbles on the Arenberg forest, for example).

The whole system is powered by a battery pack located in the downtube. It offers about 70 hours of ride time per charge, and charges in about two hours. The total weight penalty for the system is a claimed 690 grams. That’s actually quite light, if you think about it. It means you could easily build a bike under 8kg, about 17.6 lbs.

It does. There are a few areas where there’s room for improvement, but the automatic lockout function is particularly impressive.

First, the good. The lockout is highly effective. When locked, the bike feels like a road bike. There is no discernible movement from either the front or rear shock. If you don’t look down, you’d never know you’re on a full suspension bike. This may seem obvious, but it’s really important: Nobody wants a squishy-feeling road bike.

The automatic lockout system is really the heart of it all. It’s what allows the bike to feel like a road bike when you want it to feel like a road bike, and yet still offer far, far more compliance than any other system when you need that compliance. There is no real latency when you hit a patch of rough stuff. It unlocks in a fraction of a second and you can feel the system working once it’s open. Then you can feel it lock up again when things smooth out. It does feel like HiRide spent most of its time developing this admittedly very clever automatic lockout system at the expense of development time on the shocks themselves. The front, in particular, was a bit underwhelming.

Developing suspension for bikes is already very difficult relative to other vehicles — there’s less mass on the system, less room for error, and greater weight constraints — and the shorter the travel, the harder it is to get it right. The elastomer rear feels quite good. The coil spring front shock, which in many ways resembles and feels like Cannondale’s old Headshok, doesn’t feel as smooth as I’d expected it to.

As part of the test, I ran the system unlocked on smooth pavement. As I had the system set up, the front shock sat at the top of its travel until I leaned into it, when it dropped quite suddenly through almost all of its travel. There was a bit of stiction in the system. Perhaps I needed a stiffer spring, or different sag settings. Perhaps it’s just a reality of such a short travel figure; the Future Shock is pretty easy to push through its travel, too.

I like that HiRide put the front shock below the headtube. Specialized’s argument for the Future Shock is that suspending the rider is more important than suspending the bike, and that doing so allows for active suspension without energy-wasting bob. It’s valid — a HiRide-style front shock without the automatic lockout would just take us back to the Headshok days, and we don’t want that on a road or gravel bike. But the automatic lockout changes things. It kills the bob that would be otherwise inherent in such a system.

Putting the shock on the fork allows the suspension to do what most suspension does, which is articulate a wheel around obstacles. That increases traction, and on bad surfaces can improve the overall efficiency of the system (in much the same was as a properly inflated tire will be faster over a rough surface than an overinflated tire).

Is this the future of road and gravel bikes? It’s not about to take over the world, no. It needs a bit more refinement. But the case for gravel suspension is quite good. And I could certainly see this used on road and gravel ebikes, where the weight would be irrelevant and the extra comfort very much in line with the targeted consumer.

I like the concept. I love the fact that the bike really does have two completely different personalities. On the road, it’s like the suspension isn’t even there. But hit something and it makes itself known. It’s seamless.

I large part of me wants to yell out, “just run bigger tires.” But the reality is that using tires as the sole mode of impact mitigation has its limitations. Tires can’t feature dampers or automatic lockout. They are only able to excel on a single surface at a time. There’s a reason why almost every wheeled vehicle humans have invented has suspension, and HiRide is indeed close to cracking the code to bringing it to road and gravel bikes.

We only got a few hours on the HiRide, and I want more. Keep an eye out for a long-term review down the line.