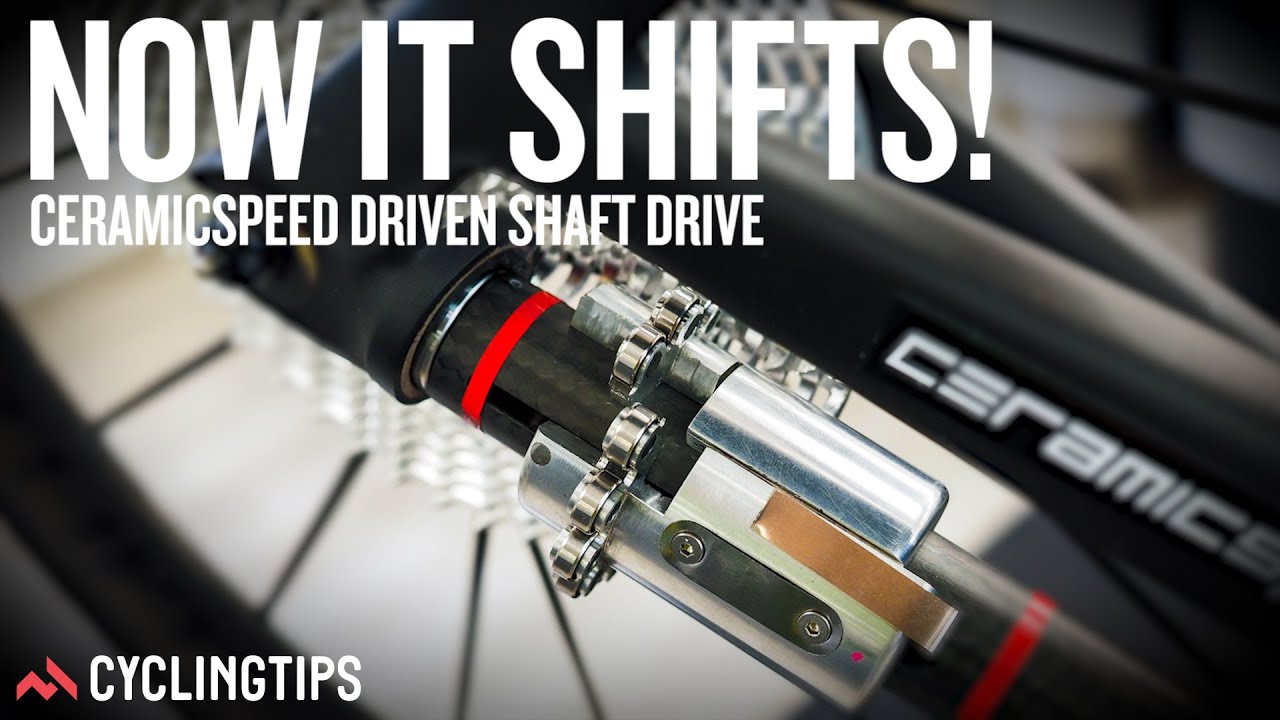 CeramicSpeed made a huge splash at last year’s Eurobike show with the debut of its truly radical Driven ultra-low-friction shaft drive concept. It really was little more than a concept back then, too, and more than a few critics dismissed it as a flash in the pan that would never see the light of day.

CeramicSpeed has been hard at work over the last year, though, and not only does Driven look a lot more refined than before, there’s also a new variant for full-suspension mountain bikes, and the system now even shifts gears thanks to a novel wireless electronic actuator hidden away inside the driveshaft.

Still think it’s a pipe dream? Maybe it is. But then again, maybe it isn’t.

A dual-clutch transmission for bikes

“After the buzz from Eurobike, we decided that we needed to take this further,” said CeramicSpeed’s chief technology officer, Jason Smith. “That was a concept; it wasn’t rideable, it wasn’t shiftable, there was still a lot left to do to get it to reality. So what we’ve been doing the last year is getting it closer to that.”

The biggest advancement by far is that Driven — once just a singlespeed proof-of-concept — can now shift gears.

Together with a student engineering team from the University of Colorado in Boulder, CeramicSpeed’s first stab at a shiftable Driven drivetrain used a rear pinion cluster that moved axially along the drive shaft. This could certainly work in theory, but shifts were only possible at areas of the cassette where the teeth on adjacent cogs lined up perfectly. There was also the issue of timing and load. The timing had to be absolutely perfect, and shifts under load were basically impossible.

The next iteration used a split pinion cluster that essentially allowed for two cogs to be engaged simultaneously, similar in theory to how the dual-clutch transmission works in many modern cars. During a shift, one half of the pinion cluster would continue to transmit torque to the current cog, while the other half would advance to the next easiest (or hardest) gear, all without skipping a beat.

However, even this system still had to wait until the teeth on adjacent cogs lined up perfectly for a smooth, jam-free shift, which also meant that shift speed was highly variable. But then CeramicSpeed came up with the idea for the “torque decoupler”.

This latest iteration of the shiftable prototype still uses a split pinion cluster at the rearmost end of the driveshaft, but one of the cartridge bearings rides on a spring-loaded carrier. During a shift, that single cartridge essentially acts as a timing bridge between two adjacent cogs so that it no longer matters where the teeth sit relative to each other; even if the teeth don’t line up, the torque decoupler allows for enough independent movement between the pinion cluster and cassette that the system can still effectively engage two gears at once.

But how exactly do those two halves of the pinion cluster move, anyway? That’s another brilliant little feature of the design.

Since each half of the pinion cluster not only has to move in a specific order — one half is always the “leader” and the other is always the “follower” — but also has to be able to move in two directions, one might assume that there are two separate electric motors and two separate actuators inside the oversized carbon drive shaft. But CeramicSpeed knew that such a design would be too heavy, too big, and too power-intensive to fit in the space allotted, so Smith and his team came up with something they’ve dubbed a “hysteresis drum”.

That hysteresis drum is basically a small cylinder with a complex pattern of ramps, channels, and gates machined into its surface. On the inside of each pinion cluster half is a trio of spring-loaded pins. During a shift, those pins ride inside the channels on the drum, which is rotated with the single electric motor. The direction of rotation dictates which way the pinion cluster “leader” moves, while that system of ramps and gates always ensures that the “follower” never moves first.

Confused? Don’t feel bad; just watch the video above and be mesmerized.

Either way, CeramicSpeed is claiming some incredibly quick theoretical shift speeds. According to the company’s calculations, Driven should be able to change gears in as little as 20ms. Current actual speeds are quite a fair bit slower than that, but still admirably quick.

The secret to better aerodynamics

CeramicSpeed revealed last week that it had conducted some wind tunnel testing at Specialized’s facility in Morgan Hill, California, saying that the specially modified Driven-equipped Specialized S-Works Venge was “3% more aerodynamic” than the same bike with a standard drivetrain. Put another way, that improvement translates to about eight seconds of time savings over 40km at race speeds.

But why is that exactly?

According to Smith, the secret lies not so much in what Driven adds, but rather what it takes away. Derailleurs aren’t exactly known to be particularly aerodynamic, and getting rid of them helps smooth out the airflow in that area significantly. CeramicSpeed also reshaped the rear cassette, making it more of a cone than a flat plate, which allowed the driveshaft to more closely follow the chainstay and the crankarms to sit at a more conventional Q-factor.

Interestingly enough, that sleek-looking 3D-printed cover that shields the rear pinion cluster and cassette looks like it’d contribute a lot to the system’s aerodynamic efficiency as well. But in reality, Specialized’s test engineers couldn’t detect any real differences either way, which suggests most of the improvements are happening further upstream.

Up until now, Driven has mostly been viewed as a road-only thing, but CeramicSpeed clearly sees things differently, based on the specially modified Canyon Lux full-suspension mountain bike prototype the two companies also worked together to produce.

The major challenge here was how to handle the change in effective chainstay length as the rear suspension moves through its travel. The solution that CeramicSpeed developed is a telescoping carbon fiber driveshaft that maintains the relation between each pinion cluster, the cassette, and the chainring, but automatically adjusts its length in between.

CeramicSpeed makes the same efficiency claims here as it does with the road version, but in this case, the bigger benefit may be weight, not friction. Modern 1×12 mountain bike drivetrains offer tremendous gearing range and remarkable chain security, but those monstrous cassettes, super long rear derailleur pulley cages, and powerful clutches also add up to a fair bit of weight, with nearly all of it situated right around the rear axle.

Although a production version of Driven is clearly still a ways off, Smith’s team of engineers estimates that a complete setup could potentially shave as much as half a kilogram from a bike that currently runs a top-end setup from Shimano or SRAM, which, together with the improved efficiency, would make for quite the enticing proposition for cross-country racers looking to gain every possible advantage.

Still a lot of questions

Needless to say, Driven is still far from being available on store shelves, and there remains an awful lot of work to be done — not to mention plenty of questions left to answer.

For one, it remains unclear just how much load the shiftable version could even handle. Currently, CeramicSpeed’s newly rideable prototype is only meant to withstand about 200W, which is barely the threshold value for many average cyclists, and roughly a tenth of what a top-level pro sprinter can produce.

CeramicSpeed also doesn’t have a shifter designed yet. Although the shiftable prototype operates wirelessly, it’s triggered by a rather big and bulky box that clearly isn’t anywhere near as small, light, or ergonomically designed as it would need to be.

On the mountain bike front, the theoretical performance improvements sound nice, but what about durability? CeramicSpeed envisions that the rear end of the drivetrain would likely be enclosed to keep rocks and sticks from getting jammed back there, but that cover would only protect against bigger stuff; one can only wonder what would happen during an especially muddy ride. And would the front area be covered as well?

CeramicSpeed’s new partnerships with Specialized and Canyon clearly paid dividends in terms of how finished the latest prototypes look, and both companies have apparently expressed some interest in using Driven if it gets closer to being a viable transmission option. But even if CeramicSpeed is able to do that — and that’s a big “if” — how much will those companies be willing to invest in dedicated frames that will have to be designed from the ground up to work with Driven? And who else might be interested?

Questions aside, Driven clearly has the potential to be the first major development in bicycle drivetrains in decades. It’s far from a guarantee that it’ll see the light of day as an actual production item — or live up to its heady performance claims — but what a day it’d be if it really does.