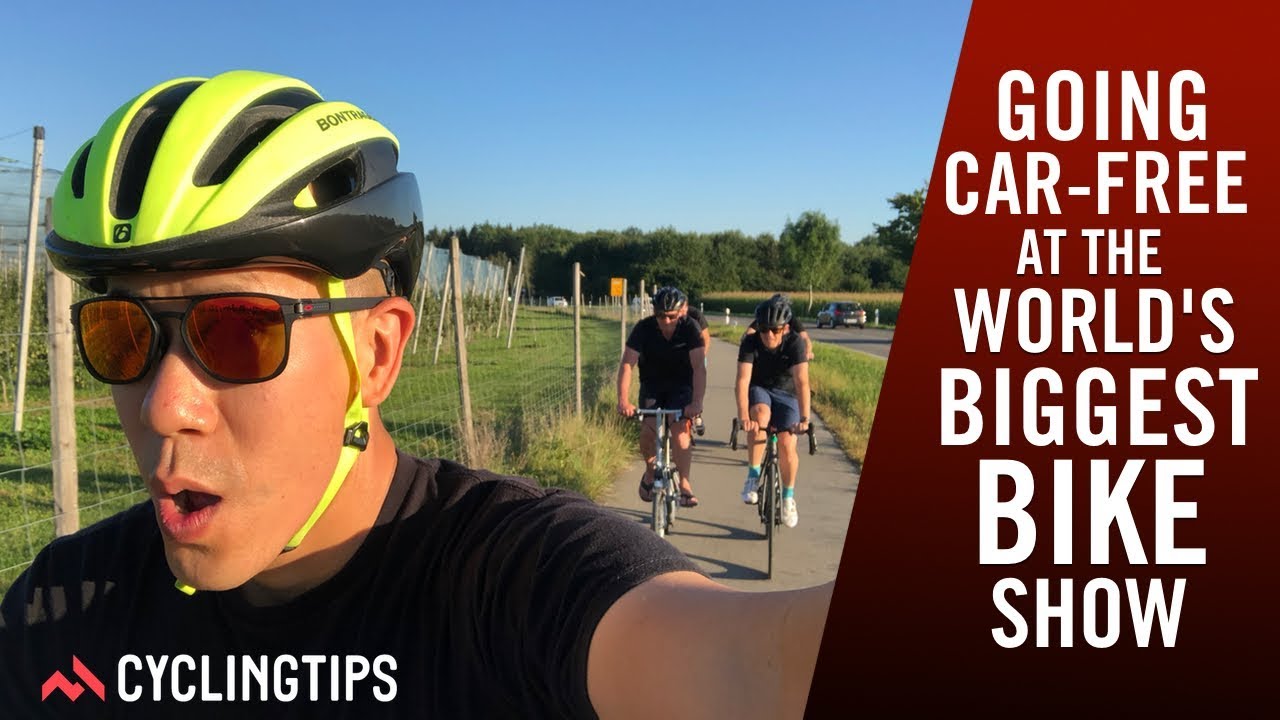 Many of us are accustomed to the concept of traveling with your bike. The idea is simple, after all: you pack up your bike, fly with it somewhere cool, ride it somewhere new and exciting, and then reverse the process and go home. However, what if the purpose of your trip isn’t to ride your bike, but a bike would still make the most sense just for basic transportation? How much easier would traveling be if you just had a bike with you everywhere you went?

That was the thought that instantly went through my head when I first saw the press release from Tern for its new BYB (Bring Your Bike) folding bike. The bike itself had no intentions of being the fastest, lightest, smoothest-riding, or, to be perfectly honest, excelling at any particular traditional performance metric.

Instead, the entire premise of the BYB — no surprise given the name — was that it was something so compact and easy to take with you that you had little reason not to. It rolls on little 20″ wheels, the aluminum frame has two hinges for an extra-compact fold, and both the extended seatpost and towering stem collapse down. The entire thing fits inside a suitcase that can easily be checked as standard baggage on any commercial airline.

As luck would have it, Tern’s release timeline for the BYB coincided with my trip to the Eurobike trade show.

Eurobike may be the world’s largest bicycle trade show, but it’s notably challenging to actually get there by bike. There is an airport in the host city of Friedrichshafen, Germany, but flights there — at least from the United States — are expensive, so the preferred alternative is usually to fly into Zurich, which is more than 130km away.

And although the Messe Friedrichshafen is a gargantuan conventional center, there’s a distinct lack of nearby lodging, not to mention the fact that the local roads clearly aren’t designed to accommodate heavy traffic. When all is said and done, it’s not uncommon to have to drive nearly an hour each way for each day of the show.

I’ve brought a bike with me before so I could ride back and forth, but I still usually had to rent a car to get from the airport to wherever I was staying. And since my travel road bike isn’t great when it comes to wet weather, a rainy forecast usually forces me to drive — again.

In short, spending so much time in a car while covering a bicycle trade show has always seemed monumentally dumb. And I was determined to not fall into the trap again this year.

I went ahead and requested a loaner BYB from Tern, and thankfully the company was able to accommodate with a production sample before I had to leave for the show. Since I had to carry everything with me while on the ground, I packed light and stuffed everything into two Ortlieb front panniers (since the Tern uses 20″ wheels, rear panniers would drag on the ground), including a bunch of rain gear from Gore Bike Wear in case the weather got ugly.

To provide a measure of safety, I also outfitted both ends of the BYB with Knog’s latest Cobber LED flashers, and in the interest of keeping things light, I rolled the dice a bit on security and went with a combination-style lock from OttoLock. In case of a flat tire, I brought a (very) small PRO mini-pump and a patch kit — no inner tube.

The morning of my departure, I headed to my local bus station, hopped on a bus to the Denver airport, checked all of my bags at the United counter, and then hoped for the best.

Here’s the thing about my plan, though: it all hinged on everything actually showing up in Zurich as planned. Thankfully, everything did.

And even better, the bicycle infrastructure in Switzerland and Germany made this endeavor exceptionally easy from then on.

I assembled my bike upon arrival, and checked the travel case in at the baggage storage center inside the Zurich airport. From there, I dropped the panniers on to the BYB’s standard rear rack, and rolled down to the train station that conveniently sits in the basement of the main terminal.

I then hopped on a train to the coastal town of Romanshorn, and then walked a few short steps directly to the ferry that would shuttle me across Lake Constance to Friedrichshafen. Literally a few seconds after we docked — bicycles and pedestrians get off the boat first, thank you very much — I was pedaling along a separated bike path on my way to our accommodation in Ravensburg, Germany.

In total, the trip took about an hour longer than it would have by car, but it was a very small price to pay for the joy of getting to ride my bike. When I checked in to our rental apartment, I felt fresh, not drained.

I didn’t have to leave any earlier each morning of the show compared to if I was driving, given Eurobike’s usual traffic patterns. I just woke up, got dressed, strapped my camera/laptop bag to my back, and rode off — easy as pie. Nearly all of the way was either on quiet backcountry roads or dedicated paths, and Eurobike does at least have ample parking for bikes on site.

Best of all, I arrived at the show each day feeling energized and ready to go, which I most definitely did not experience in previous years when I drove in. I walked the show as I usually do with far more energy than usual, and then at the end of the day, instead of ruing the thought of being stuck in traffic yet again, I actually looked forward to hopping on my bike for a casual pedal back to the apartment.

Pedaling turned out to be a wash in terms of time efficiency, too, given the usual traffic.

The morning of the last day of the show was slightly more complicated since I was departing for the airport from there later that evening, but still it was hardly a major chore. I locked up my bike as usual, and used one of the secure lockers at the convention center for my gear. I had been lucky with the weather up until then, but Mother Nature saw fit for a turn that evening as I made my way to the ferry station. The BYB’s standard front and rear fenders were extremely helpful, as were the panniers’ waterproof construction and my Gore rain gear.

A few minutes after leaving the show, I was sitting on the ferry as it made its way back across the lake, and I was munching on a couple of warm soft pretzels watching the world go by. And then not long after that, I was sitting (with my bike next to me) on a fast and cozy train speeding back toward Zurich Airport.

I wasn’t sure what would await me once I got there, though. I had booked an inexpensive hotel (I had an early-morning flight) that was near the airport, but not at the airport, and I couldn’t tell from Google Maps how easily I could get there by bike.

The train pulled into the Zurich Airport station, and I somewhat anxiously walked out the front door with my bike and gear. After a few minutes, I stumbled upon a bike rack full of bikes — which invariably meant that there was a bike path nearby. And indeed, just around the corner, there was not only a dedicated bike path, but signs indicating where I needed to go.

Fifteen minutes of easy pedaling later, I was resting inside my hotel room, feeling decidedly smug about how well the trip had gone.

How multi-modal transportation should be done

There was certainly a fair bit of logistical planning involved in this trip, but nothing over-the-top. And while the Tern BYB that I used was pretty pricey (retail cost for the one I used is a whopping US$2,500, plus US$300 for the hard-sided travel case), I could easily see a well-heeled, frequent-flying cyclist justifying the cost in order to always have a bike on hand to get around. Far easier to justify is the less-expensive build of the BYB, which is a far more attainable US$1,300.

Either way, what influenced the success of the trip far more was the stellar transportation infrastructure I experienced in Switzerland and Germany: airports that are directly connected to trains, trains that actually go somewhere useful, a serpentine network of bike paths, and public transportation systems that are designed with bikes in mind — not to mention a general attitude that bikes are a legitimate mode of personal transportation, and not just nuisances that are in the way of motorized traffic.

To be honest, I’m not sure I could pull this off in many of the non-European destinations I regularly travel to, although I’ve already started researching some of the places that are on my work calendar in 2020.

But even if I can’t pull this off again, I can wholeheartedly say that this one experiment was a resounding success.

I started this whole process with a question in my head: “How much easier would traveling be if you just had a bike with you everywhere you went?”

The answer: Better. Much, much better.